Halle Berry did an interview for Vanity Fair’s career timeline series and reflected on several past roles, from 1989’S Living Dolls all the way up to her most recent film/directorial debut, Bruised. She also discussed the iconic critical bomb Catwoman and winning the 2004 Razzie for Worst Actress. Halle explains that everybody takes themselves too seriously, and she wanted to accept the award in person and be “a good loser.” She says, “I had a great time and then I set that thing on fire.” That’s right, Halle torched her Golden Raspberry! END_OF_DOCUMENT_TOKEN_TO_BE_REPLACED Halle Berry stars in and makes her directorial debut on the Netflix MMA fighter movie, Bruised, which comes out on November 24. Halle promoted the movie in a cover story for Entertainment Weekly, and what was also bruised was her body, because on the first day of shooting she broke her ribs. And then she rubbed some dirt in it and got back on the field–and Halle finished the movie.

END_OF_DOCUMENT_TOKEN_TO_BE_REPLACED People says that Halle Berry was actually joking about that bob and struggle bangs she debuted at the 2021 Oscars last week. Halle made everyone wonder if something was wrong because she stepped out at the Academy Awards looking like she’d just cut her own bangs in a spur-of-the-moment decision after waking up from a five-hour depression nap. But apparently, it was just a gag! She hit up social media to reveal that she didn’t really get Lloyd Christmas bangs.

END_OF_DOCUMENT_TOKEN_TO_BE_REPLACED 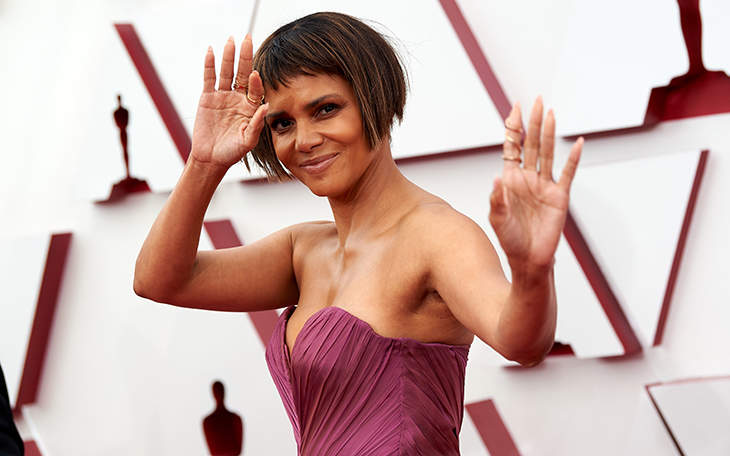 Halle Berry decided to go for a Fighting The Hot grand championship last night by showing up to Hollywood’s annual circle jerk known as the Oscars with a chopped-up bob complete with TERF baby bangs. Don’t worry though, she hasn’t posted any offensive and unwanted anti-trans op-eds yet.

END_OF_DOCUMENT_TOKEN_TO_BE_REPLACED

Halle Berry Is Not Happy That She’s Still Paying Gabriel Aubry $16,000 A Month In Child Support There was a time when the name Gabriel Aubry would either make you think of Calvin Klein undies or that violent Thanksgiving Day fight with Olivier Martinez. Generally, his name doesn’t come up that much. Well, not if you’re Halle Berry, that is. If you are Halle Berry, then you know that you think of Gabriel Aubry every time you have to pay him $16,000 in child support, which is something that happens every month. And Halle is tired of it.

END_OF_DOCUMENT_TOKEN_TO_BE_REPLACED

Halle Berry Has Confirmed The Identity Of Her Mystery Man Last month, we learned that Halle Berry, who still isn’t divorced from Olivier Martinez, appeared to have a new special someone in her life, and all we knew about them was that they had feet and hairy legs. For all we knew, Halle was dating Nanny from Muppet Babies (hey, we don’t know what Nanny’s legs looked like under those green striped tights, and who are we to judge). Those who want to get with Nanny, now is the time to shoot your shot. Because that’s not who Halle is with. Halle has appeared to reveal the identity of her new man, and she did so by using a t-shirt to break the news.