Not So Fast On That “Handmaid’s Tale” Wine That didn’t take long. It was only yesterday when MGM, the studio behind The Handmaid’s Tale, announced it would start hawking very on-brand merchandise for the show: wine! Y’know, because Gilead is all about the handmaids and barren wives tossing back a few at the country club and having a good ol’ laugh about living in oppression with a bunch of looney tune men with Napoleon complexes. Social media naturally lost its shit over the boozy attempts by a show that leaves us all feeling like shit each week and in need of a cocktail (hey, maybe they weren’t that far off the mark?). MGM has now decided to pull the cork, er, plug on the wine. Dammit, I was looking forward to Aunt Lydia two-buck chuck down at Trader Joe’s. END_OF_DOCUMENT_TOKEN_TO_BE_REPLACED

Now For The Messy Fashion Of The Critics’ Choice Awards Hollywood decided to wear black at the Golden Globes last Sunday night in silent protest of the industry’s sexual assault problem. But four days later, most Hollywood people at the Critics’ Choice Awards went with color.

Kate Bosworth didn’t wear color, but she did wear a mess. Kate is wearing a dress by Brock Collection, but if I hadn’t been told who made her dress, I’d assume she went into a formal event showroom on a particularly dry day, collected too much static electricity while trying on a bridal gown with her socks on, and accidentally left the store with a child’s christening gown that was stuck to her. The best part is that the fun didn’t end when Kate turned around.

END_OF_DOCUMENT_TOKEN_TO_BE_REPLACED Almost everyone who walked the Golden Globes red carpet this year wore black to protest Hollywood’s sexual misconduct problem. One thing that wasn’t being protested was good taste. There were a lot of black velvet outfits on that red carpet. Sure, it’s a bit of an obvious choice, but a choice I was absolutely here for, because anything that makes my brain start blasting “Black Velvet” by Alannah Myles gets two thumbs up from me.

But some people went a little more experimental with their all-black interpretation. Like Angelina Jolie, who showed up to the Golden Globes in some goth Lawrence Welk Show realness by Atelier Versace. It’s a little Barbra Streisand at the 1969 Oscars, with a splash of 60s televangelist, all poured onto a fainting couch and garnished with, “But detective, I swear my husband was dead when I found him!”

END_OF_DOCUMENT_TOKEN_TO_BE_REPLACED

“Gilmore Girls” May Get A Second Season On Netflix 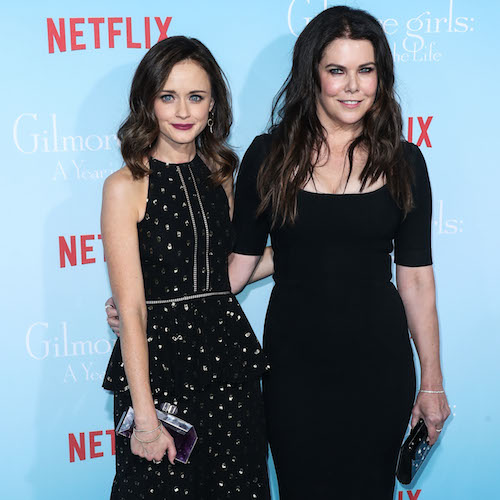 Netflix’s Gilmore Girls revival, Gilmore Girls: A Year in the Life, ended on a (spoiler alert) huge cliffhanger. Alexis Bledel’s Rory confessed to Lauren Graham’s Lorelai that she’s pregnant. Nobody knows who the father is (it’s totally Logan), and it seemed like a really awkward place to end the show in the event Netflix decided not to pick it up for a second season. There’s a good chance we’ll find out who the dad is, as well as see more of Luke’s weird hairline and that pig that Kirk has for some reason.

Netflix’s COO Ted Sarandos recently told UK’s Press Association (via Deadline) that they’ve started having talks with Gilmore Girls creators Amy Sherman-Palladino and Dan Palladino about another season. The first season of GG: A Year in the Life was considered a success; the first episode got 5.99 million viewers in the first three days of streaming.

It sounds like a second season wouldn’t be a total waste of time. Except that Vanity Fair points out there’s a lot of people involved with Gilmore Girls that might be too busy to commit to more episodes. Lauren Graham is starring in a pilot for Fox called Linda from HR and has a recurring role on the upcoming season of Curb Your Enthusiasm. Milo Ventimiglia is busy with This Is Us. Amy Sherman-Palladino has a new show premiering this month on Amazon called The Marvelous Mrs. Maisel. And we all know how full Chad Michael Murray’s schedule is.

The obvious solution here is to just write the whole second season around Kelly Bishop. One, because DUH. But two, because I’m sure everyone would watch a whole year’s worth of Emily Gilmore volunteering at the whaling museum.

One ticket to the Nantucket Whaling Museum please. pic.twitter.com/V4sH7WeqYt When It Comes To Baby Birthing, Pete Campbell And Rory Gilmore Are The TV Eva Mendes And Ryan Gosling 2016 IS the year of the secret baby! It makes me want to have a secret baby. But you know, if I did, it wouldn’t stay a secret that long. If a human baby with my DNA was born, CPS would immediately sniff them out and open up a file.

When Eva Mendes got knocked up with her second GosBaby, nobody found out until their child was almost ready to make an appearance. When Eva did birth out her and Ryan Gosling’s second daughter Amada Lee Gosling, we didn’t find out until about 2 weeks later. Well, 37-year-old Vincent Kartheiser and 34-year-old Alexis Bledel managed to outdo their asses in the secret baby department.