For a nation filled with fatties (myself included), we sure hate to see them in the movies or on TV unless they are villains played by our most prestigious hunky British actors (for the men) or our thinnest, most glamorous blond actresses (for the ladies). That seems unlikely to change anytime soon, but at least we are starting to have that conversation. Sarah Paulson, who played Linda Tripp in Impeachment: American Crime Story, was the most recent actress to sit in the padded hot-seat to answer for her rubbery crimes. Now it’s Renée Zellweger’s turn to try to explain why America hates looking at fat women unless they are actually thin women committing rubbery crimes.

END_OF_DOCUMENT_TOKEN_TO_BE_REPLACED It feels like there have been six hundred seasons of American Horror Story. The reality is, Ryan Murphy has done ten seasons and one AHS spin-off, creatively titled American Horror Stories. The franchise has kept Sarah Paulson very busy. She went from the person I thought was Monica Potter to the unofficial queen of the American Horror Story. Sarah could be playing witches, weirdos, creeps, murderers, mediums, and haunted iPhone enthusiasts until she literally becomes a ghost, but Sarah recently revealed that this current season might be last her.

END_OF_DOCUMENT_TOKEN_TO_BE_REPLACED 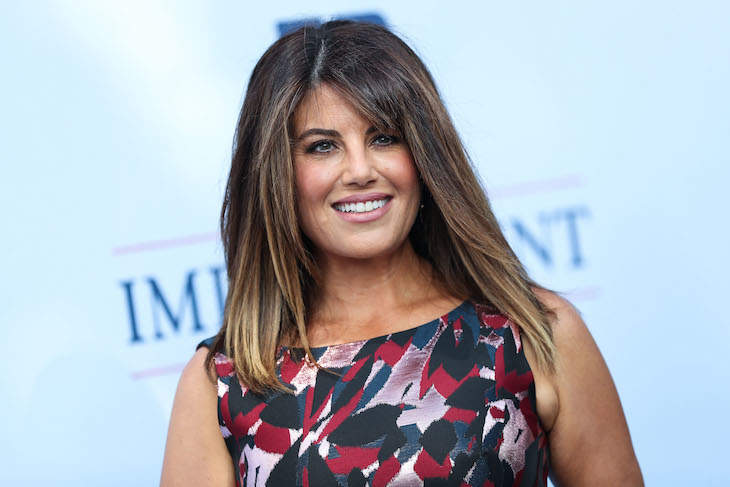 Last night Monica Lewinsky made an appearance at the Hollywood premiere of FX’s Impeachment: American Crime Story. 48-year-old Monica wore a multicolored cocktail dress, which is cute enough, but I found myself thinking, “She’d look nice in blue.” And I’m not trying to be snide, she really would! END_OF_DOCUMENT_TOKEN_TO_BE_REPLACED In Impeachment: American Crime Story, which follows the Bill Clinton/Monica Lewinsky scandal, Sarah Paulson plays Linda Tripp, who died last April at the age of 70. Well, Sarah herself doesn’t only play the role of Linda Tripp. Sarah got some help from a straw wig, rubber face pieces, and padding. And in an interview with The Los Angeles Times, Sarah talks about her regret of wearing one of Mrs. Doubtfire’s leftovers and won’t do that in the future. Unlike Julianne Moore who is always game!

END_OF_DOCUMENT_TOKEN_TO_BE_REPLACED

The Full Trailer For “Impeachment: American Crime Story” Is Here After teasing the first look at the series that will no doubt go on to sweep the Emmys and cause massive waves of mid-90s nostalgia for The Gap, FX has dropped the first trailer for Ryan Murphy’s Impeachment: American Crime Story. We get to see what everyone looks like in Impeachment-era styling, wigs, and prosthetics. Just like all Ryan Murphy projects, the results are achieved with varying degrees of success. Some look great (Beanie Feldstein’s turn as Monica Lewinsky) and others will make you wonder what is going on (Clive Owen’s best estimate of a Bill Clinton impression). But I have to hand it to Ryan for the perfect casting in that television above. Nothing brings me back to 1998 like the low-frequency buzz and aggressive static shock I’d get from sitting too close to the ol’ Sony Trinitron tube TV.

END_OF_DOCUMENT_TOKEN_TO_BE_REPLACED 32 years. The number of years that Nutmeg, the oldest cat in the world, blessed us with his presence. The length of the First War of Scottish Independence. How long it’s been since the premiere of one of cinema’s finest farces, Big Business. Finally, 32 years is the age gap between partners Sarah Paulson, 45, and Holland Taylor, 77. These two have been dating since 2015, after Holland slid into Sarah’s DMs. Sarah discussed their high profile relationship for the October cover story of Harper’s Bazaar.