Open Post: Hosted By Ariana Grande Asking Jennifer Coolidge About The “Best Dick” She Got From Playing Stifler’s Mom Career-wise, Jennifer Coolidge has had a really great couple of years, thanks to The White Lotus. I cannot say the same about her personal life because I do not know her personally. But guess who does? Jennifer’s super-fan Ariana Grande. Ariana’s so Coolidge-obsessed that she cast Jennifer in the video for her 2019 hit thank u, next and pulled off a pretty impressive impression of her Best in Show character this past Halloween. Now Ariana has interviewed Jennifer for Entertainment Weekly’s 2022 Entertainers of the Year issue, and she didn’t shy away from asking the hard-hitting questions. For example: “Do you remember the best dick you got from playing Stifler’s mom?” Oh, sweetie, you never forget the best dick (shout out to the Newfie lawyer I met after an Arcade Fire concert in 2014). END_OF_DOCUMENT_TOKEN_TO_BE_REPLACED After the announcement that Ariana Grande will star in the film adaptation of the stage musical Wicked, I figured she would finally do something different with her hair. I mean, it’s Glinda the Good Witch, after all. She didn’t bungee jump from the heavens like Rapunzel with one long strand of hair. She floated in a bubble with her thick, luscious weave adorning the sky like clouds. Well, that may still happen, but after Ariana shared a pic of her new Glinda hair, I wouldn’t be surprised if Ari’s Glinda was also addicted to ripping out her hairline with non-stop ponytail action.

END_OF_DOCUMENT_TOKEN_TO_BE_REPLACED One-time Nickelodeon star, Jennette McCurdy‘s new book I’m Glad My Mom Died, is now out, and all the tea from her days as a potential victim of alleged child predators has been spilled. We know from her book that she turned down $300,000 in hush money to keep quiet about her experiences working with someone she refers to as “The Creator”– which is most likely Dan Schnieder who left the show during #MeToo. In her book, Jennette also writes about her “rivalry” with her Sam & Cat co-star Ariana Grande. But it seems like it had less to do with Ariana herself and more with the higher-ups on the show. Since Ariana was on a superstar trajectory during their time working together and was allowed to regularly skip filming, Jennette ended up picking up a lot of Ari’s slack. And in her memoir, Jennette reveals that when she was younger she was definitely not an Arianator.

END_OF_DOCUMENT_TOKEN_TO_BE_REPLACED Ariana Grande has had a restraining order against a stalker since he showed up at her home last September with a knife. It was a scary situation. But you know what they say about stalkers: they’re literally stalkers; so he came back and was arrested again, this time on her birthday–which was Sunday. Thankfully, Ariana Grande was not home at the time. Poor Ari, having to deal with this–her next song should be No Stalkers Left To Restrain.

END_OF_DOCUMENT_TOKEN_TO_BE_REPLACED It looks like Kanye West’s marketing angle for his next album Donda 2 is to get attention by acting like a 2-year-old brat throwing a tantrum and screaming at everyone over his favorite rattle going missing (only to find out later that he’s been holding his favorite rattle in his hand the whole time). Because fresh off from starting a one-sided fight with Billie Eilish over for something she didn’t do, Kanye has now made an enemy out of his friend and collaborator (correction: EX friend and EX collaborator) Kid Cudi and all because Cudi is friends with “you know who.” At this point, “you know who” could be anyone since Kanye is burning bridges left and right, but he’s talking about his estranged wife Kim Kardashian’s boyfriend Pete Davidson. And Cudi slapped back, calling Kanye a “dinosaur.” And because of that, I’m sure Barney is going to file a defamation lawsuit against Kid Cudi for that hurtful comparison.

END_OF_DOCUMENT_TOKEN_TO_BE_REPLACED

Cynthia Erivo And Ariana Grande Will Star In The “Wicked” Movie 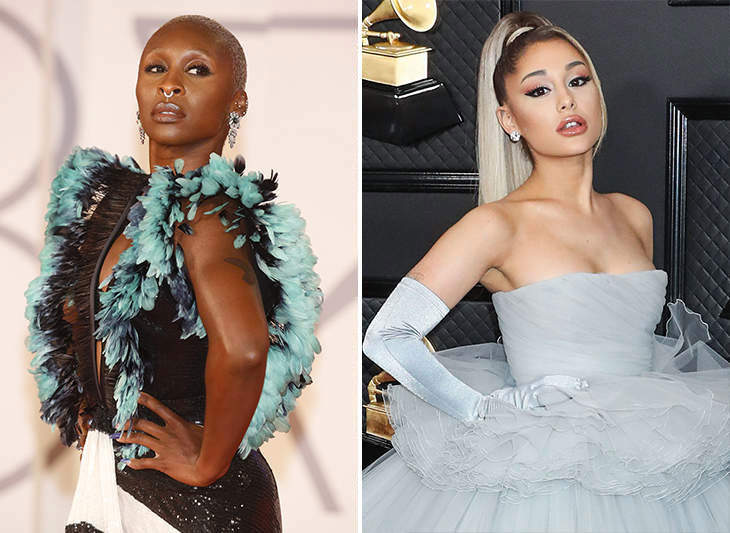 Last night Lea Michele was trending on Twitter so I knew instantly that she had lost another role to someone. She doesn’t trend unless she is shitting in a wig or losing roles. I soon found that 34-year-old Cynthia Erivo and 28-year-old Ariana Grande have been cast in the movie version of the Broadway musical hit Wicked, which Jon M. Chu will direct. And while everyone is plugging their ears in anticipation of Lea Michele scream-crying about losing out on another dream role, somebody should check on Dove Cameron too.