Since Hilaria Baldwin said that she’s most likely disarming her still-smoking baby cannon for good, she instead recently shat out a podcast called Witches Anonymous where she and her co-host, Michelle Campbell Mason, “explore women’s relationships with each other – both as the strongest support system and the fiercest adversaries.” The first episode debuted yesterday, and Hilaria hilariously said that she used to judge couples with a large age difference, but now that she’s in one, her previous thought that the younger person in the relationship had to be a gold-digging bimbo was a complete misconception.

END_OF_DOCUMENT_TOKEN_TO_BE_REPLACED

Hilaria Baldwin Says That She And Alec Baldwin Are Probably Done Having Babies, But “Time Will Tell” Hilaria Baldwin has a new podcast since her last one went so well. Hilaria’s new podcast will focus on “sisterhood in pop culture.” And since that topic isn’t interesting in the least or believable coming from her, she decided that stoking speculation that she and Alec will maybe keep the bebé train rolling by basically saying “never say never” would be the best way to go about promoting her new project–since she’s constructed her entire personality around being a womb on legs.

END_OF_DOCUMENT_TOKEN_TO_BE_REPLACED When Alec Baldwin is not busy combating his many enemies and withholding his phone from the authorities, he’s welcoming another kid into the world. Yes, there’s a brand new Baldwinito on the scene. I guess Hilaria Baldwin took that “somos un buen equipo” engraving on her wedding band seriously because she’s now just three kids short of un fútbol team! Alec might want to train up some of those kids in the legal arts instead of kicking a soccer ball because a new child isn’t going to win him sympathy points. Unless that baby comes with a Harvard law degree, Alec will still have to face the consequences of his actions in court.

END_OF_DOCUMENT_TOKEN_TO_BE_REPLACED It looks like Alec Baldwin is finally pulling the trigger (too soon?) on working to fulfill his promise to make the streets of New York a safer place for paparazzi to roam and for people to park cars by taking his Hispanophile wife and ever-growing litter of Baldwinitos and getting out of dodge to instead vex the unassuming people of Vermont. The New York Post reports that Alec has just put his Hamptons estate on the market shortly after selling his Central New York lake house.

END_OF_DOCUMENT_TOKEN_TO_BE_REPLACED 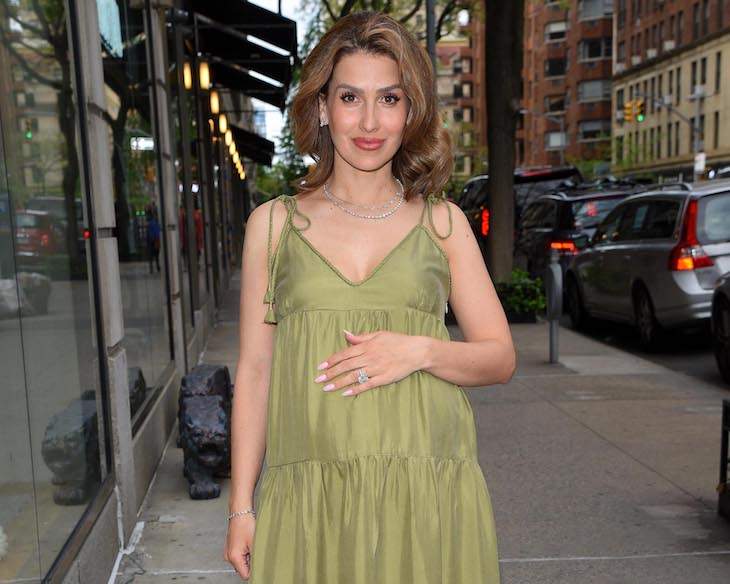 Hilaria Baldwin is currently pregnant with Bebé Baldwinito #7. But Hilaria’s many enemies and haters theorize that, actually, this señorita may be faking her pregnancy harder than her Spanish heritage. They accuse her of wearing a “moon bump,” which is a realistic-looking fake pregnancy belly made of silicone. Moon bumps come in an array of sizes, from a delicate 3-4 months pregnant to ready to burst. Based on Hilaria’s latest selfies, my guess is she’s currently sporting the 7-8 months model. Or… is she? Yesterday, 38-year-old Hilaria took to her Instagram Stories to address the “the psycho conspiracy theorists online” who think she’s faking #7. She jokes that they actually have “somewhat of a point,” because her “friends” (the three-way mirror at the Gap doesn’t count, girl!) told her that her belly “kind of looks fake… like I ate a ball.”

END_OF_DOCUMENT_TOKEN_TO_BE_REPLACED I had no idea Alec Baldwin was experiencing “psychological torture” as a result of being “dehumanized” by his “enemies” who “seek to destroy him” for the solitary crime of “speaking up for what [he believes] and for helping others,” but after reading Hilaria Baldwin’s most recent post on Instagram, I’m like, jeez, now I feel kinda bad for the guy. Here I thought the observation that Alec is a short-tempered, egotistical blowhard who doesn’t know when to quit was valid given his past, current, and predicted future behavior. But Hilaria is his wife and presumably knows the tortured soul hiding somewhere under that steely exterior better than anyone. And it’s not like Hilaria has never given us any reason to doubt her. After all, Spanish women are as well known for their candor as they are for their familia gazpacho recipes.