Open Post: Hosted By Harry Styles Splitting His Pants In Front Of His Crush Jennifer Aniston During His Show We can probably assume that 28-year-old Harry Styles has a little thing for women older than him. We watched in discomfort as he spent some time lapping up 38-year-old Olivia Wilde’s special salad dressing that Jason Sudeikis was willing to risk his life for. And about three years ago, Harry appeared on Ellen DeDeneres’ show and revealed during her usually awkward and humiliating “Burning Questions” segment that his first celebrity crush was Jennifer Aniston–who’s 25 years his senior. Last night, Harry was able to show his boyhood crush what he’s working with; because in the middle of his show, the crotch of his pants ripped open as Jennifer (and thousands of others) watched from the audience.

END_OF_DOCUMENT_TOKEN_TO_BE_REPLACED 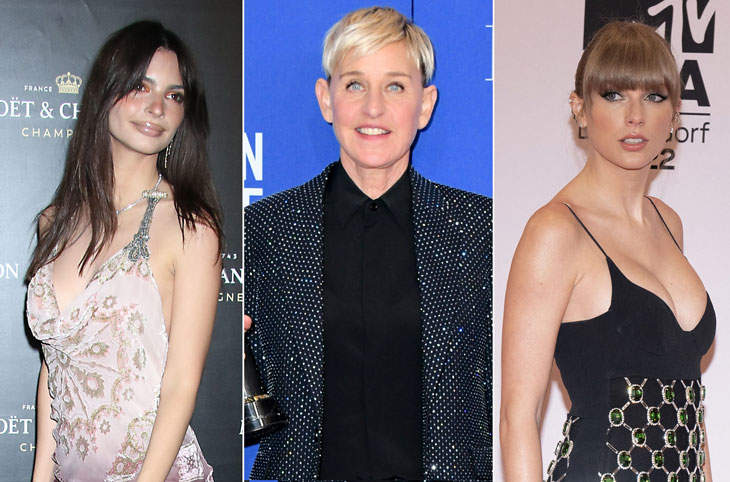 Now that we know the dance segments during Ellen DeGeneres‘ talk show were probably her attempt to bob and weave an invisible Satan finally coming to collect her rotted soul, her old interviews have become hard to watch. And since the internet loves to remind us of how things used to be, there are many examples of Ellen’s now infamous cruelty on display during a time when we thought she was just being funny and quirky. Now in hindsight, we realize Ellen’s kind of an asshole. And 2022’s reigning dinner date queen Emily Ratajkowski recently came across two ancient interviews with Ellen and Zane Lowe featuring the Baroness of Beautiful Gowns, Taylor Swift. And EmRata chose not to be kind in her response to Ellen’s behavior with Taylor.

END_OF_DOCUMENT_TOKEN_TO_BE_REPLACED Two quite petite blond women have significantly upgraded their living conditions with the $70 million purchase of a 9,000 square ft, 5-bedroom, 8-bath home on 3.5 acres and an additional 6.6-acre vacant lot in Carpinteria, CA, marking the “priciest residential deal in Santa Barbara County history,” according to Dirt. The women, married “entertainers” Ellen DeGeneres and Portia de Rossi, have no children and at this time, do not appear to have any plans to construct a gothic mansion on the property to house and educate orphaned children and teens with special powers. They do, however, reportedly have a lot of houseplants with special needs that weren’t being met at any of the couple’s other homes in the area, which include three “cottages” and a horse ranch in Montecito and an estate in Bel Air, presumably all with inadequate sun.

END_OF_DOCUMENT_TOKEN_TO_BE_REPLACED You may remember Greyson Chance as the young kid who got big for playing Lady Gaga‘s Paparazzi on the piano at school and going viral a decade ago. Here’s a refresher:

Ellen DeGeneres signed Greyson to her record label with Interscope and wanted to turn him into the next Justin Bieber. But that didn’t happen. And in a new interview with Rolling Stone, Greyson claims that Ellen was such a monster to him that he currently suffers from PTSD. Well, since that’s the case, Greyson may want to stay away from his phone because I have a feeling that this interview may unleash Hellen The Terrible on him again.

END_OF_DOCUMENT_TOKEN_TO_BE_REPLACED The Ellen DeGeneres Show is over. Not with a bang, but a whimper (from Ellen DeGeneres’ traumatized PAs). The series finale aired today, and, as previously announced, the final guest was Jennifer Aniston. Jenn has been on the show 20 times and was Ellen’s first guest ever, so it was a real full circle moment. The two reflected on that initial 2003 interview, and Ellen asked how Jenn dealt with Friends ending in 2004. Jenn joked, “I got a divorce and went into therapy.” Portia De Rossi, I hope you have an escape plan that involves a suitcase full of diamonds and a tell-all manuscript entitled, “No Eye Contact, Please: Sleeping With The Queen of Mean”.

END_OF_DOCUMENT_TOKEN_TO_BE_REPLACED I remember a time when Ellen DeGeneres was America’s second-favorite dancing queen behind ABBA until it came to light that her real favorite type of dance is stomping over her staff’s feelings with mean words. Of course, she immediately began to shimmy her way through the allegations with apologies, but they all fell upon deaf ears and ultimately led to her long-running talk show The Ellen DeGeneres Show getting a complete re-tooling in the form of a goodbye! Although she’s still trying to convince us she’s the same lovable, rhythmless dancing fool she was of days passed we no longer buy that act anymore. So in an attempt to get people to watch her sinking ship one last time, Ellen announced one of her final guests will be her very first guest, Jennifer Aniston.