⅓ of the BeckPelMez throuple, Brooklyn Beckham, has been trying to shove his basic-ass food down everyone’s throats for a minute now, ever since waking up one day and deciding that he wanted to be a “chef.” And so it was, since Victoria and David Beckham are his parents, and he has the means to put on any fleeting career-hat of his choosing. But he’s been catching so much flack for his lack of training and execution of recipes that Mommy Becks took a time out from feuding with Brooklyn and his wife, Nicola Peltz Beckham, to defend the roast beef he made on his reel the other day (as if she eats roast beef; we know she only eats fish and toast). If Brooklyn is keeping count of the people in his corner, he can now add another notch to his eyebrow because he just gained another defender in the form of sweary celebrity chef/Beckham family friend Gordon Ramsay. Though Gordon would scream, “IT’S FUCKENNNN RAWWWWE,” right in the face of anyone else who made that roast, he instead offered the insight that Brooklyn can’t help who his parents are and things are really hard for him, so everyone needs to cut him a break.

END_OF_DOCUMENT_TOKEN_TO_BE_REPLACED If you’ve recently been experiencing headaches, vertigo, and persistent tinnitus, it may be because the high-pitched, squeaky wails of David Beckham bounced off the Tower of London, traveled the halls of Buckingham Palace, and then made their way across the English Channel and Atlantic floating directly into your earholes. Reportedly, Daddy Beckham had finally had enough of the drama that’s been plaguing their family ever since his son, Brooklyn Beckham, married Nicola Peltz. Apparently, Nicola’s recent magazine interview where she aired out some of the rumored drama between her and mother-in-law, Victoria Beckham, was the straw that broke the wee church mouse’s vocal cords, and David finally reamed out Brooklyn hoping to put a stop to the feud.

END_OF_DOCUMENT_TOKEN_TO_BE_REPLACED 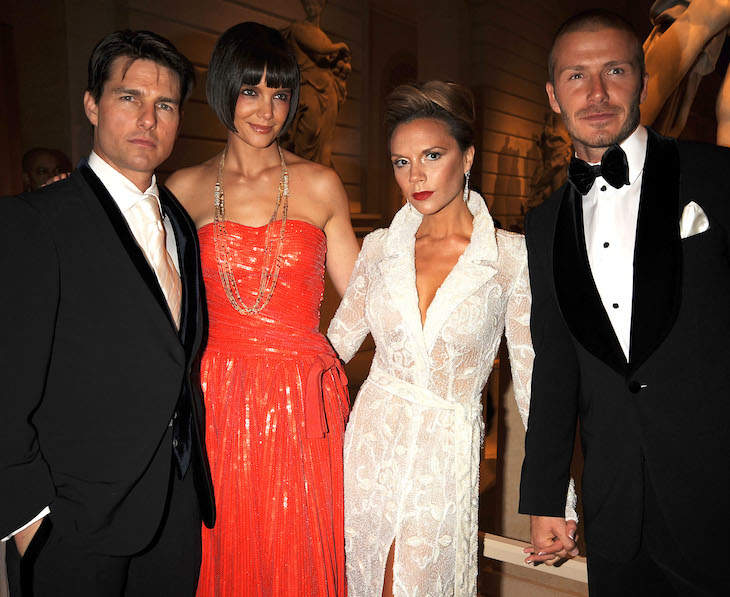 For example, those John Travolta gay rumors. 67-year-old Mike claims that, back in the day, he was chatting to John in a hotel suite when a male masseur walked in the room and kissed John on the mouth. Whoops! Then there’s the failed wooing of David and Victoria Beckham. Apparently, Tom Cruise wanted David to be in Scientology so bad that he built a soccer field. But it didn’t work. Whomp, whomp! Finally, there’s the Nicole Kidman stuff. Mike claims that David Miscavige felt Tom was pulling away from the cult while filming Eyes Wide Shut with Nicole in London, so he sent one of his cronies to “audit” Tom. The audit drew Tom back into Scientology and created a distance between him and his wife. Obviously, Scientology denies all of Mike’s allegations. They tell Page Six that he’s an “inveterate liar.” Google says “inveterate” means: “chronic, deep-seated.” So that’s two words Scientology has taught me: “inveterate” and “glib.” END_OF_DOCUMENT_TOKEN_TO_BE_REPLACED I’ve got to be honest with you, I thought initial reports that Victoria Beckham was in a blood feud with her new daughter-in-law, Nicola Peltz, were a bit of a goof. Just a fun, petty little diversion. I certainly could not have predicted that in just a matter of months, the Beckhams and the Peltz would be settin’ up on their palatial porches, shotguns at the ready, willing to risk it all to become the Hatfields and McCoys of the 1%. Boy was I wrong. Page Six reports that Brooklyn Beckham’s parents, the model and the footballer, are going toe-to-toe with Nicola’s parents, the billionaire and his wife, over the future of the burgeoning Peltz Beckham empire. Sources say the cessation of mutual Instagram liking between Victoria and Nicola is merely “collateral damage” in a fight that is threatening to destroy them all, or at the very least, Thanksgiving in Turks and Caicos.

END_OF_DOCUMENT_TOKEN_TO_BE_REPLACED Newlywed and dramatic actor Nicola Peltz is putting her theatric skills to test in a new Instagram post. If you’re wondering, “Uh, who?” Nicola is THE New Mrs. Beckham a.k.a. Brooklyn Beckham’s wife. In the short time that she’s been with Brooklyn, Nicola has become Victoria Beckham’s new nemesis, knocking Crocs from the top spot. It’s no secret that Victoria does not care for her daughter-in-law and the resulting feud has led to some discord amongst the family members. Nicola can no longer take the bad vibes and posted her private, intimate FEELINGS on social media for the public to consume.

END_OF_DOCUMENT_TOKEN_TO_BE_REPLACED

Victoria Beckham And Her New Daughter-In-Law, Nicola Peltz, Are Reportedly Not Talking And Can’t Stand Each Other Ever since Brooklyn Beckham dared to choose going on summer holiday with new wife Nicola Peltz’s “gorgeous family” to celebrate her grandmother’s 94th birthday rather than yachting in Europe with his parents, David and Victoria Beckham, the family feud they were already embroiled in has only continued to fester. Who would have thought that a woman who’s eaten the same meal every day of her life for the last quarter century, hates smiling, and has a bucket containing all of her beloved children’s lost teeth wouldn’t get on with her firstborn’s wife who happens to be the child of a billionaire and was first introduced to the scene as New York’s alleged premier nanny abuser?