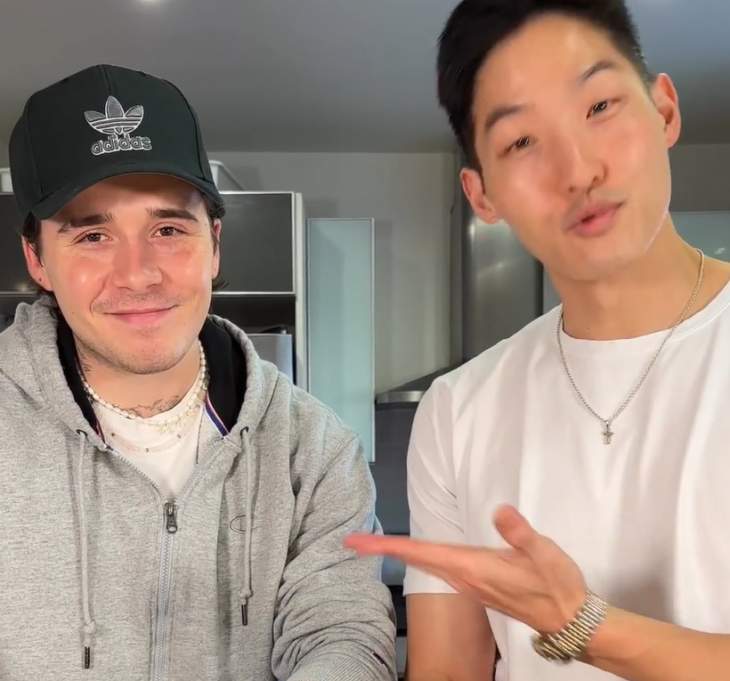 I’m sure Victoria Beckham couldn’t be any more proud of her son, Brooklyn Beckham, for not only keeping up with his pandemic hobby for two entire years, but also for making a career for himself out of it. To think, had Brooklyn taken up drinking too much and masturbating in the middle of the day like the rest of us, instead of learning how to cook; well, he’d be broke and bloated with a raw pee-pee/woo-woo like the rest of us. Instead, his business is thriving. So much so he’s had to bring on help! And not just in the kitchen. We all know that the concepts of “dining” and “cuisine” were heretofore foreign to Victoria, but now that they are the only things separating Brooklyn from reaching his full potential and professional destitution, she’s had to step out of her comfort zone to defend Brooklyn against charges of under-cooking a roast of beef in his latest sizzle reel.

Victoria Beckham jumped to Brooklyn Beckham’s defense after his recent cooking video caused quite a stir on social media.

Posh Spice had a firm response to critics who called her eldest son’s roast beef “raw” as he proudly shared a clip of the dish with his 14.7 million Instagram followers.

The “Wannabe” singer added that she will be “attempting this” for her husband David Beckham, and her three other kids.

Here’s the video. What Brooklyn lacks in technical knowledge, skill, kitchen hygiene, or star power, he more than makes up for in greasy splashing and forceful dumping.

Looks good to me if I could unsee the ocean of redundant saturated fats that went into it. But lord knows there’s nothing quite as strong as a *mother’s love, and Victoria’s is so strong she was willing to tell a little fib in order to facilitate the manifestation of her son’s destiny by pretending she might try a recipe that calls for no fewer than six sticks of butter, a few cups of beef fat and a glug or two of olive oil, for the health. A recipe, mind you, I had to chase down on Kevin’s Instagram page (where nobody seemed concerned about its done-ness) because his boss at Brooklyn Inc. neglected to either tag him in the video or include a single written word of actual instruction in his post. I have to wonder if Brooklyn needing to bring in reinforcements means that he and his wife Nicola Peltz Beckham‘s throuple situation with Selena Gomez of HBO’s Selena+Chef fame was nothing more than a failed audition on her part. OK, and his part.

*some mothers may not apply. It’s fucked up, I know. Sorry.

Tags: Brooklyn Beckham, Nepotism Stories, Nicola Peltz, Selena Gomez, Top Chef, Victoria Beckham
SHARE
Our commenting rules: Don't be racist or bigoted, or post comments like "Who cares?", or have multiple accounts, or repost a comment that was deleted by a mod, or post NSFW pics/videos/GIFs, or go off topic when not in an Open Post, or post paparazzi/event/red carpet pics from photo agencies due to copyright infringement issues. Also, promoting adblockers, your website, or your forum is not allowed. Breaking a rule may result in your Disqus account getting permanently or temporarily banned. New commenters must go through a period of pre-moderation. And some posts may be pre-moderated so it could take a minute for your comment to appear if it's approved. If you have a question or an issue with comments, email: [email protected]
src="https://c.statcounter.com/922697/0/f674ac4a/1/"
alt="drupal analytics" >