Chris Cuomo was locked in his basement with coronavirus for weeks, so maybe he’s emerged a new man? And part of that includes wanting to be naked all the time? Because he’s free of the bonds of coronavirus and the bonds of clothing? He’s thrown off the shackles of the name “Fredo” as well as the shackles of wearing anything on his body? It would help explain why he appeared naked in the background of his wife’s Instagram-live yoga session–giving her followers a full view of his chakras. Namaste, indeed!

END_OF_DOCUMENT_TOKEN_TO_BE_REPLACED 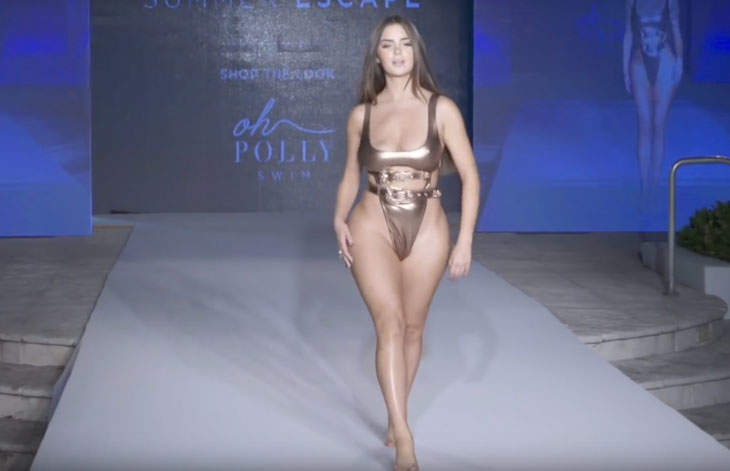 Since I graduated from Barbizon School of Modeling with honors* and was head of my runway walking class**,  I am an authority on the art of the catwalk right up there with my colleague Naomi Campbell, so I have earned the right to shake my head at British bikini model Demi Rose for strutting down the runway like a college student with severe diarrhea who while running to the dorm bathroom sees the dude she has a crush on in the hallway so is trying to keep it calm and sexy. Demi Rose’s awkward stumble walk made the rounds, and after everyone made fun of it, she said that she’s laughing too, but she’s not much of a runway model (girl, we know), her shoes were too big, and she was going through it emotionally.

END_OF_DOCUMENT_TOKEN_TO_BE_REPLACED

Tags: Demi Rose, Get Thee To A Barbizon, Struttin' That Ass
SHARE

Ass Is Always The Answer

In news that will make you rethink your every-decision-you’ve-made-since-fucking-junior-high-school, the Daily Mail says there’s an now ex teacher’s assistant in Florida who is single handedly turning around her state’s reputation for bad decision making by dropping her boring TA job to drop her booty in a much more lucrative T&A career full time. Twenty two year old Jessica “Two First Names” Vanessa turned her sensible suits in for satin booty shorts and now bitch is getting PAID to twerk it (That’s why it’s called tWORKING bitches – Jessica). In related news, why the fuck did I take the colleges? I want a refund.

If you thought that Miley Cyrus killed twerking by humiliating it before setting fire to it and spinning out on its face with a camouflage paint jobbed 4-wheeler, watch the video and let Jessica’s mesmerizing ass moves restore your faith and take you up and away from that sadness. Her ass is like the Mozart of Twerk. It undulates, it goes back and forth, it goes up and down, side to side, and in and out. It’s the Hokey Pokey of ass. It’s part waterbed and part clacker and completely awesome.

Some people have tried slut shaming Jessica and girl, forget those jealous bitches. They’re just mad that they didn’t pick shaking it over Excel spreadsheets. Jessica says that she didn’t have to be an ex math teacher’s assistant to understand that 6 seconds of work > 4 months for the same pay. Thank you for making us all re-evaluate our careers and teaching us to understand that maximizing on our unique as(s)ets is the way to go.

Tags: #getmoneybitch, Elegance Has A Name, From The Department Of Random, Struttin' That Ass
SHARE I’ve only been to confession a couple of times and not once did the priest end our session by saying, “Say ten Hail Marys and before you go in peace, would like to buy some meth?” I feel so cheated.

I’ve been waiting for the Global Catholic Network to get into scripted television and now here’s the perfect plot for their first dramedy. Monsignor Kevin Wallin, former pastor at St. Augustine’s Cathedral in Bridgeport, CT, was charged earlier this month for being part of a nationwide drug ring. The CTPost (via JMG) says that Msgr. Kevin was indicted on six charges and he could face a life sentence if convicted. St. Augustine’s issued a statement saying that they are “shocked,” but that they stand by him and are ready to help him through this difficult time. But the fuckery doesn’t stop there. This isn’t just your regular old-fashioned Catholic priest turned meth dealer story.

Msgr. Kevin resigned as pastor of St. Augustine’s two years ago due to “health and personal problems.” “Health and personal problems” is just Catholic priest talk for “getting caught with legal dick up your ass, ” because the CTPost says that he was forced to resign after the church found out that he was fucking “odd-looking” cross dressers in the rectory while wearing women’s clothes. (More like fucking in the rectumory.) Church officials also found sex toys in Msgr. Kevin’s room. They suspended him and continued to pay him a stipend all the way up until he was arrested for selling meth.

After Msgr. Kevin left the church, he continued to sell meth and at his peak, he was making $9,000 a week. He used some of that money to open up a sex shop in North Haven called Land of Oz. Investigators believe that he used the store to launder the thousands of dollars he made in selling meth. Msgr. Kevin still kept in contact with officials from the Catholic church and he used to go see musicals with his mentor, former N.Y. Cardinal Edward Egan and parishioners

A rep for the Diocese said:

“We had no indication he had a drug problem and never had complaints regarding him and drugs. We approached him and he admitted he was struggling a bit and shortly after that he resigned (July 2011) and the bishop granted him a sabbatical.

The rep went on to say, “And at least he wasn’t raping underage boys. That’s a first!“

So to recap: Msgr. Kevin is a meth-addicted, drug-dealing former Catholic priest who hollered out show tunes while getting butt banged by a cross dresser in the rectory. Walter White seriously has nothing on this bitch! If priests told stories like this during mass, I’d be in church every single night. Hell, I’d be in church right now. These are the kind of stories I want to hear.

When the CTPost asked one of St. Augustine’s parishioners for a quote, she said, “There is an evil invading our world and it has come to our church.”

Well, somebody’s jealous that Msgr. Kevin looks sexier than she does in a pink négligée.

Miley Cyrus completed her transformation into the chipmunk Billy Idol last night when she screamed out “Rebel Yell” at VH1 Divas Live. Since she’s a hardcore rock bitch now, Miley grabbed at her cooter, molested her own chipmunk chichis and screeched out an ear drum-bursting sound that made Billy Idol pick up the phone and call a suicide prevention hotline. Who ever “she” is needs to stop crying out for MORE MORE MORE, because all of us want LESS LESS LESS of this mess. People call animal control when they hear sounds like the sound that came out of Miley’s mouth last night.

Not only does Billy Ray’s finest kin need to step away from rock songs forever, but she also needs to step away from all bottles of peroxide. Bitch is looking more and more like Jane Child’s toddler son who was fed moonshine instead of milk as a baby. But on a positive note, I will slap a gold star on Miley’s forehead for wearing a formal version of The Slut Dress.

Tags: Miley Cyrus, Struttin' That Ass, You Tried It
SHARE As his ice block of a wife shot scenes as Grace Kelly with Milo Ventimiglia for Grace of Monaco, Keith Urban wrapped his huevos in Spandex to go swimming in the pool of his hotel. It’s nice knowing that when the hot pavement burns the bottom of Keith’s feet, he makes the same pained look he makes when he breaks his boner after making the mistake of gently slapping his peen against Nicole’s concrete forehead.

Personally, I prefer vintage Keith Urban when he looked like a Til Tuesday era Aimee Mann as hipster Colonel Sanders, but I’d still hit Keith Urban of today. The meatball with tentacles tattoo really did it for me.

And it was really smart of Nicole Kidman to make the hotel put statues of her all around the pool area, so Keith never forgets her while she’s working. The resemblance is uncanny and I’m sure Keith also made the mistake of gently slapping his peen against that statue’s forehead.