It’s been a long time since we’ve heard new music from Miley Cyrus, and I think the world was fine with that. However, since she’s a singer, she felt the need to entice the world with her twenty-packs-of-Newports voice on a new song titled Flowers. This time she’s keeping it cute and contemplative as she rings in the new year by talking about loving herself more than any man ever could. And by any man, she probably means her ex-husband, Liam Hemsworth, because not only is the video a wonderful teaser trailer if she decides to create an OnylFans page, but it also speaks to the new era in her life where self-love is the most important thing.

END_OF_DOCUMENT_TOKEN_TO_BE_REPLACED While shit at CNN was mostly sober, over at NBC on New Year’s Eve, the peacock was definitely snorting some mind-alternating hallucinogenics. Miley Cyrus hosted her second annual Miley’s New Year’s Eve Party on NBC with help from extremely special co-host, her godmother and universal angel Dolly Parton. Never mind that Miley’s special was way too fucking light on the Dolly; she had other guests like Latto, Sia, Rae Sremmurd, Parasite Hilton, and David Byrne of Talking Heads. Since Dolly is Dolly, she was the bright shining star of the show without even trying, but a close second was David Byrne!

END_OF_DOCUMENT_TOKEN_TO_BE_REPLACED 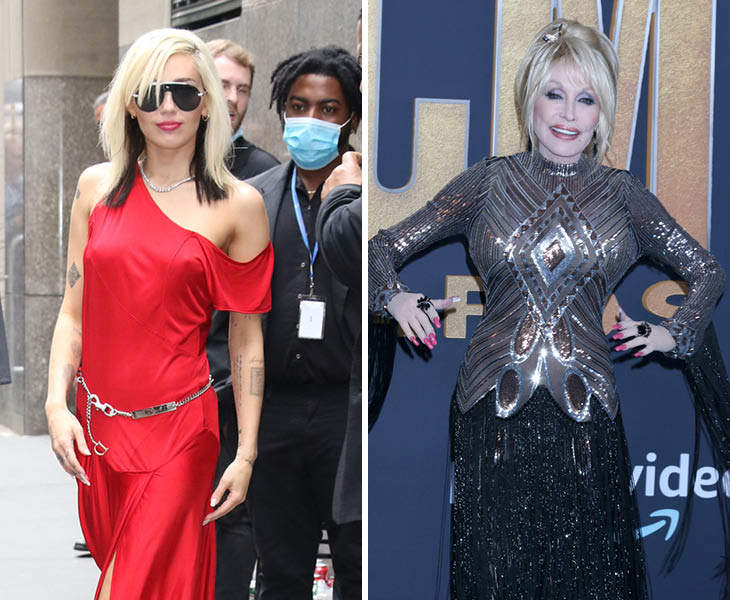 We’re almost another year around the sun, and who better to guide us home than down-home country gal Miley Cyrus? She’ll be hosting Miley’s New Year’s Eve Party alongside her godmother/American saint Dolly Parton and will be crooning her greatest hits, all while keeping her shirt on. To promote the program, Miley shared the story of how she almost gave Dolly a heart attack. Look, the last thing we need to cap off 2022 is something happening to Dolly, especially at the hands of Miley Cyrus!

END_OF_DOCUMENT_TOKEN_TO_BE_REPLACED Miley Cyrus is obviously really jealous of the positive energy her father Billy Ray Cyrus was able to engender from the black community with his feature on Lil Nas X‘s Old Town Road because she really let the flood gates of apology flow open when she was recently called out again for her previous remarks on hip-hop culture during part of her “I’m not urban, I’m a country bumpkin now” musical era.

Miley is again doing hip-hop-ish music on her new album so I guess she’s trying to highly emphasize how sorry she is for all her past transgressions. Well, your dad certainly has nudged the door open for you, we’ll see how you play this…

END_OF_DOCUMENT_TOKEN_TO_BE_REPLACED Apparently it’s Messy Cake Feuds Week. Except unlike yesterday’s cake battle, in which a woman got pissed at Walmart not getting anywhere near the cake she wanted, this feud is about Miley Cyrus getting exactly the cake she wanted. Problem is, she allegedly didn’t ask first before she stole the design from the baker, and now that baker is pissed.

END_OF_DOCUMENT_TOKEN_TO_BE_REPLACED Continuing the recent trend in thin-skinned celebrity overreaction to criticism, Miley Cyrus #tooktotwitter to express her extreme displeasure at a bad review for her latest EP “She Is Coming”. The review titled “Miley Cyrus’ ‘She Is Coming’ Is a Directionless Hot Mess Express” appeared in Highsnobiety. It gets 5 stars from me for the headline alone, but Miley feels otherwise and implored its author to suck her nuts.