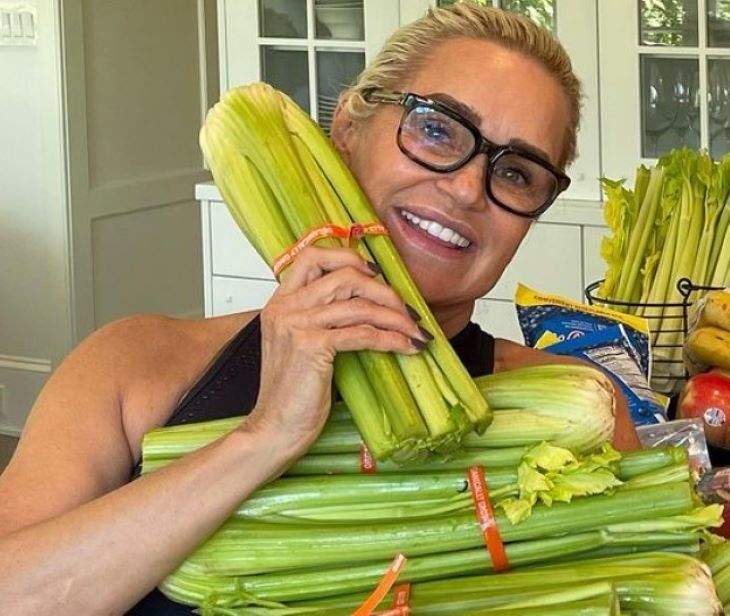 The Real Housewives of Beverly Hills alum Yolanda Hadid’s beautiful glass refrigerator was really her only positive contribution to her four-year tenure on the show that ended in 2016, but when it came to her daughters Gigi and Bella Hadid, the food inside was for display purposes only since she was constantly up their asses about their eating. Yolanda wanted them to be successful models; apparently, nourishment was counterproductive to that goal. Gigi and Bella did eventually become supermodels (Gigi is such a super supermodel that she’s over 25 but still managed to catch Leonardo DiCaprio’s attention), but Yolanda’s questionable parenting choices along the way were outlined in a TikTok that went viral this summer. Now, Yolanda just responded by making her own TikTok where she sarcastically called herself “#worstmomever.”

END_OF_DOCUMENT_TOKEN_TO_BE_REPLACED The world was shocked, shocked I say!, when it was discovered that Leonardo DiCaprio was breaking his own rule of never dating a haggard, old maid (read: women over 25). Rumor spread that Leo was hanging out with Gigi Hadid who is a full TWO YEARS older than 25. Initially, we all thought it was just Yolanda Hadid trying to get some easy press for her daughter, but after being seen ”getting cozy” at a party and anonymous sources saying that they’re having a “good time,” the Leo-Gigi affair might be true love. Now they’ve been spotted at the same hotel in Paris. At this rate, we may have to upgrade them to canoodling!

END_OF_DOCUMENT_TOKEN_TO_BE_REPLACED

The Weeknd Played A Voicemail Apology At Coachella, And People Think It Was From Bella Hadid This year’s Coachella began with a whole lot of drama, by way of Kanye West pulling out at the last minute, possibly due to the drama in his personal life. He was quickly replaced by The Weeknd, who might have brought some of his own personal life drama to his Coachella set. No, he didn’t sing out an itemized list of all the ways Coachella organizers like to mess with performers’ bank accounts. The Weeknd played a real-sounding voicemail at the end of one of his songs, and a whole lot of people believe it was a very real voicemail from his ex-girlfriend, Bella Hadid.

END_OF_DOCUMENT_TOKEN_TO_BE_REPLACED At 14 years old, you’re a ball of hormones with hair growing in places, pimples breaking out, emotional instability; and it only continues for several years before your literal body chemistry balances out and you become a grown adult human person. During this time, many people transform, going from gangly pre-teens to not-as-awkward teenagers that Scott Disick would totally hit on. But at 14 years old, Bella Hadid permanently changed her face with surgery by getting a nose job. And people are mad about that! After Bella admitted to Vogue that she got her nose done at 14 and regrets it, people called Yolanda Hadid a “bad mother” for allowing her daughter to make that big change at so young. Clearly, none of these people watched Yolanda police her daughter Gigi Hadid‘s food intake during her stint on Real Housewives of Beverly Hills, because this is old news.

END_OF_DOCUMENT_TOKEN_TO_BE_REPLACED Bella Hadid appears on the April issue of Vogue, and inside she reveals what pretty much everyone has suspected each time an old picture of her resurfaces on the internet – that her current nose is not the nose she was born with. But anything else on Bella’s face that might raise suspicion is just your mind playing tricks on you, according to Bella. Bella says nothing else has been done to her face.

END_OF_DOCUMENT_TOKEN_TO_BE_REPLACED

Gigi Hadid Showed Support For Ukraine And Palestine, And Vogue Edited Out “Palestine” From Her Statement As many celebrities have done ever since Putin declared war on Ukraine, Gigi Hadid showed support for Ukrainians and vowed to donate everything she made from walking in shows during the Fall 2022 fashion season to the country. But Gigi’s donation will not only go to helping Ukraine, but it will also go to helping Palestine (where her father is from), which has been in conflict with Israel for decades. Vogue reported on Gigi’s actions, but after getting shit for it, they made sure to edit out Palestine from Gigi’s message. END_OF_DOCUMENT_TOKEN_TO_BE_REPLACED