Damn, Madge Looks Hot For Just Having Had Cataract Surgery As Baby Brahim and Casper Smart had a toddler slap flight in the backstage daycare area at the Billboard Music Awards in Las Vegas, his sugar mami accepted an award for being the top touring act of 2012. Everybody bow downed to the zombie vampire queen as she showed us the finger she uses to pop one of Baby Brahim’s stubborn doody bubbles. She’s maternal like that. And here’s Madge taking off those pretentious cataract sunglasses while accepting her trophy, which looks like Tommy Lee’s gilded dick:

Yes, several pairs of fetus ass cheeks were used to make Madge’s newest face and she looks like a pimp who has fallen on hard times and had to get an extra job as a morning-shift stripper, but she still looks hotter than Ke$hit (although, that’s not hard to do)!

This Is The Look: Elena Lenina At The Cannes Film Festival 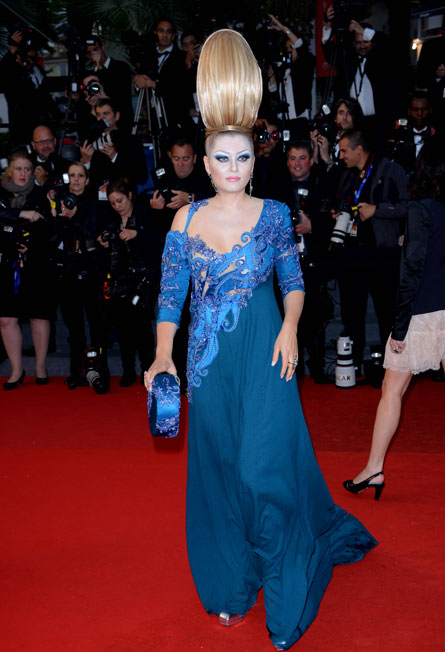 Who cares if the name “Elena Lenina” makes your mind go blank the same way White Oprah’s does when she tries to think of the name of the youngest Lohan kid. The only thing you need to know about Russian TV personality type Elena Lenina is that she brought the glamour to the Cannes Film Festival premiere of Jimmy P., Psychotherapy of a Plains Indian when she sashayed onto the red carpet with a giant butt plug of hair on top her head. Elena looks like a Martian Girl from Xenu’s home planet. If this is Elena’s way of trying to become the next Mrs. Tommy Girl, it’s totally going to work. The quickest way to Tommy’s heart is through his butt.

I am jealous of the lucky ho who got to sit behind Elena Lenina during the movie. Staring at a blond butt plug is totally better than watching some movie. Backdoor Farrah just put out the welcome mat in front of her backdoor for Elena. Just bring your butt plug hair, Elena. Farrah’s already got the lube.

And here’s some others at tonight’s premiere who obviously didn’t get the memo that the theme of the night was “sex toy hair.” In order after Elena: Jennifer Lawrence, Liam Hemsworth, Cheryl Cole, Jane Fonda, Eva Longoria, Bai Ling and the all-natural Queen of Cannes Chicken Cutlets.

Phoebe Price Has Some Competition At Cannes If you ranked all the greatest supermodels of the world past and present, Phoebe Price would be at the very top and all the other supermodels would be in big pile far, far, far below her. But at the Cannes Film Festival premiere of The Great Gatsby today, Cindy Crawford put her fingers on PP’s toes when she sashayed out onto the red carpet looking like this. Cindy Crawford came hard for Chicken Cutlets (that visual, I know) by looking like a Botoxod leather vision in white. Richard Gere’s former gerbil handler also gets extra points, because the top of her dress sort of looks like two bedazzled antelopes kissing.

Meteorologists in Cannes reported that today was the first day in the history of weather reporting that there was not one single gust of wind in Cannes. Cindy Crawford’s hair just naturally looks like the wind is blowing through it. On the last night of Cannes, Cindy and PP should have a pose-off at the top of the stairs. The world as we know it would never be the same again!

Here’s a few others who tried to out-glamour Cindy Crawford tonight. In order after Cindy: Basement Baby, Nicole Kidman (the hell is that hair?), Bai Ling, Carey Mulligan with the Gatsby dudes, Leonardo DiCatchAho with Tobey Maguire and Lana Del Taco with Florence Welch. (Yes, Florence was standing too close to Cindy when that picture of her drowning in her own hair was taken).

Out Of The Way, Bitches! True Glamour Coming Through! Taxi cabs stopped honking, pigeons stopped pecking at other pigeon carcasses, Amanda Bynes stopped hiding her face with her purse and Donald Trump stopped being an asshole for five seconds, because they all stared at Christina Hendricks as she strolled down the street in Manhattan looking like a ginger goddess in sparkly gold shoes. You know passengers gave up their cabs even though she didn’t need a ride and traffic stopped. Christina is looking like the kind of power bitch who is coming for your company, your man, your apartment, your vacation house, your 401k, your charge account at Lord & Taylor and your everything else! Who cares if Christina probably choreographed this walk in her hotel room for hours before she came out? This is some fresh out of a vintage Vogue shit and that soulless ghoul Anna Wintour better eat her bangs over this.

And later, Christina Hendricks came out of The Daily Show with her magnificent chichis looking like two sunsets. Bitch closed down the night and then some.

Everything Is Perfect About The “Behind The Candelabra” Trailer

HBO finally released a full trailer for Liberace biopic “Behind the Candelabra” and I think it made me butt birth out a rhinestone-covered baby unicorn. In under two minutes, they gave us sequined vests, gallons of lip gloss, exquisitely applied eyeliner, bubbles, Matt Damon in a white Speedo, feathers, fur, a crystal-encrusted Rolls Royce chariot, gay drama and more wigs than a Knowles family reunion. If there was a close-up shot of a massage therapist’s dick, it would look exactly like John Travolta’s daily thought process.

And more importantly, the trailer gave us this: When Rob Lowe puts on a middle-parted long wig he looks like a coked up Princess Stephanie in the middle of an orgasm and who knew looking at that would give me the puckers.

Scientologists don’t believe in anti-depressants, because when they want to get happy, they fuck themselves in the butt with an e-meter can while humming the theme to Close Encounters of a Third Kind. So it’s not exactly surprising that Kirstie Alley is throwing ten balls of hate at the anti-depressant Abilify for using cartoons in their commercials. The Jabba the Hutt of Scientology spent yesterday and today ranting on Twitter about how Abilify is targeting children by using cartoons. Kirstie may not have a PhD in pharmacology, but she has a PhD in batshit lunacy, so she definitely knows what she’s talking about. Here’s the truth according to Dr. Kirstie: So Kirstie is hating on a pill that claims to help with depression and yet she’s the member of a “religion” that claims to cure gayness? Oh, Kirstie, never stop being you. This bitch needs some Abilify. And you know, I think I’d rather suffer from dizziness and have trouble swallowing (I can’t believe I just typed that, my social life is ruined) than be a Scientologist. So Kirstie, you stay worshipping an alien god and we’ll stay pilled up.