Billie (20) and her new man Jesse (31) already made their Instagram debut as a couple on Halloween, “seemingly poking fun at their age difference” with Billie dressed as a baby doll and Jesse dressed as “an old man, complete with bald cap and a gray mustache.” Jesse is friends with Billie’s brother Finneas (who was also at the LACMA Gala with his girlfriend Claudia Sulewski) and has known Billie since 2017 when she was 15. But Billie and Jesse were “getting cozy” prior to making it official; they kept it under wraps. But now they’ve pulled back the covers on their relationship to reveal … pajamas, duh! Good thing these two were already dressed to call it a night because, as I mentioned before, the sun was sent packing early when Salma showed up with her titty balls and sent the Earth’s usual orbit into a tailspin. There’s a reason her husband, French billionaire husband François-Henri Pinault resembles a blind mole rat. Poor fellow hasn’t been able to see anything but the insides of his eyelids since Salma’s chichis scratched his retinas and sent his eyeballs rotating on an entirely new axis. The same thing must have happened to Sydney Sweeney because there’s no way she picked out this outfit while sighted. You’d think she’d be immune to Salma’s chichi’s given her own ample bosom reduced her grandparents to slobbering tit fiends. Here are some of the other stars who attempted to shine despite the mammoth mammary meteor shower on display. 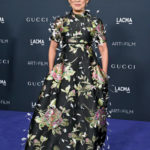 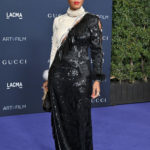 Tags: Andrew Garfield, Billie Eilish, Carey Mulligan, Fashion, Finneas O'Connell, Heidi Klum, Idris Elba, Janelle Monae, Jared Leto, Jodie Turner-Smith, Jude Law, Julia Garner, Kim Kardashian, LACMA, New Couple Alert, Olivia Wilde, Quinta Brunson, Salma Hayek, Sandra Oh, Sebastian Stan, Sydney Sweeney
SHARE
Our commenting rules: Don't be racist or bigoted, or post comments like "Who cares?", or have multiple accounts, or repost a comment that was deleted by a mod, or post NSFW pics/videos/GIFs, or go off topic when not in an Open Post, or post paparazzi/event/red carpet pics from photo agencies due to copyright infringement issues. Also, promoting adblockers, your website, or your forum is not allowed. Breaking a rule may result in your Disqus account getting permanently or temporarily banned. New commenters must go through a period of pre-moderation. And some posts may be pre-moderated so it could take a minute for your comment to appear if it's approved. If you have a question or an issue with comments, email: [email protected]
src="https://c.statcounter.com/922697/0/f674ac4a/1/"
alt="drupal analytics" >