Drake And Rihanna Awkwardly Reunited At A Child’s Birthday Party Even though that picture is beyond blurry, I can fully recognize the emotion Rihanna is feeling on the side of that ball pit. I know, RiRi, it’s just not fair that they’re never big enough for adults.

Drake and Rihanna haven’t been a thing since they broke up for the 1,385th time back in October. Only Drake’s diary knows how many times they’ve seen each other since then. But over the weekend, they attended the same child’s birthday party. Billboard says the moment was captured by a mutual friend’s Snapchat. That friend figured if Drake and Rihanna had to endure an afternoon of awkward tight smiles, the rest of us should have to suffer with them for at least 50 seconds.

That awkward moment when you and your ex show up to the same party #rihanna #drake pic.twitter.com/OydtPkcMSq

I don’t know what’s more awkward for Rihanna: running into her ex, or seeing him crouched in a corner by himself at a kiddie party like a weirdo.

Those Snapchats never show us if Rihanna and Drake ended up talking to each other. I want to believe they didn’t, and that it was Rihanna’s choice to avoid his ass. Drake lives his life like it’s a goddamn romance novel, so you know it would have been only be a matter of time before he approached Rihanna with a piece of birthday cake and whispered something about how it’s not the sweetest thing at the party. 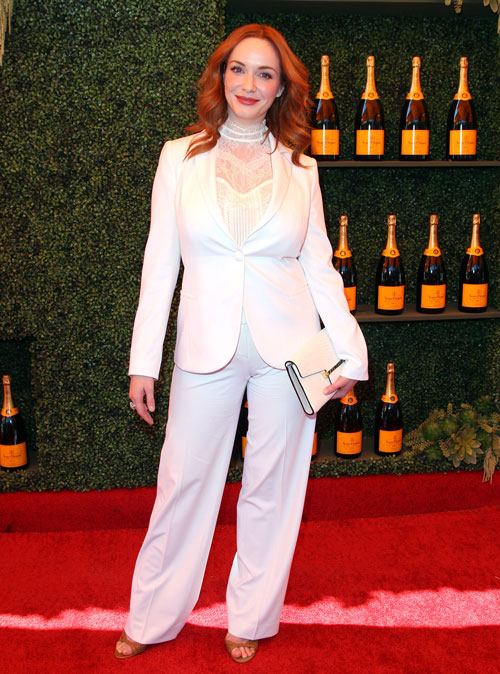 Christina Hendrix showed up to the 5th Annual Veuve Clicquot Polo Classic in Pacific Palisades, CA yesterday, and for some ungodly reason she chose the Napoleon Dynamite reject outfit above to wear to the event. NO. Awkward Family Photo 70s tux/doily combo Christina…really?? I can’t.

I know that the whole world yells at her to put her ridiculous pillowlicious chi chis away once in awhile but this is taking it way too far. That “ensemble” is tata jail. Illegal. FREE THE TATAS!!! And not only is it tata jail, it’s face/hair/shoes/body/all of it jail that sucks the life from everything else in a 5 mile radius into a vortex of fuckugly. We’re so sorry Christina!!! Please please PLEASE bring back the tatas. We’ll even seat them in the front row so they feel special.

Did Christina plan this outfit, or was she attacked by my Grandma’s window sheers and ridiculously long dresser runner before falling into a “vintage nobody wants” Goodwill box on her way to the red carpet? I don’t know. All I know is that the next time someone shades her for always having Tha Girls on display, she should show them this picture and they will immediately retract their statement and fluff her boobs for her. Everybody wins. 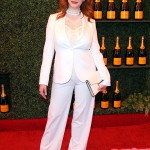 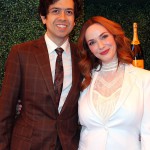 Tags: Christina Hendricks, Illegal, Makeovers, Uncomfortable, What The Fuck Were You Thinking
SHARE

After centuries upon centuries of hearing that Brit Brit’s going to bring her Arm Waving And Lip-Synching Spectacular to Las Vegas, she finally announced on Good Morning America today that she’s doing a two year residency at Planet Hollywood. Thousands of her fans dressed up in her …Baby One More Time school girl outfit and dragged themselves to the middle of the Nevada desert at 2 in the morning to hold up a giant sign for her. Brit Brit saw the sign from a helicopter and she later told Sam Champion that she got the sicks during the ride. Yack, bitch! And yes, Brit Brit barfing up in the helicopter before announcing has Las Vegas shows is foreshadowing.

When Brit Brit finally landed on the ground and rinsed the voms out of her mouth with pork rind-flavored Listerine, she told Sam Champion that her new album is coming out on December 3rd and her Las Vegas show “Britney: Piece of Me” will start on December 27th. She’s (and by “she” I mean Daddy Spears and her other wallet holders) supposedly getting $30 million to do 96 shows during a 2 year period.

In the pre-recorded interview with RedFace McVeneers, Brit Brit didn’t look that uncomfortable and she didn’t look like a pilled up robot deer caught in the headlights. She looked semi-alive-ish! But then in the live interview, she was fidgety, over it and looked like she would’ve rather been eating a plate full of organic, farm fresh vegetables than be in the middle of the desert with Sam Champion. It’s hard to blame her, because standing on top of the graves of people who messed with the mob while being surrounded by a bunch of screaming crazies in school girl costumes sounds like a Hell worse than Burning Man.

And why was she dressed like a Hong Kong-based lady pimp? Tags: Britney Spears, Do You Need A Moment?, Uncomfortable
SHARE

A few days ago, a lawyer for Khyati Shah, the victim in the airborne teabagging gone wrong incident at the Billboard Music Awards, told the media that she was very close to slapping him with a lawsuit. Khyati’s lawyer, Vip Bhola, said that she suffered injuries that might affect her for the rest of her life. Now he’s saying that Miguel’s bad acrobatic decisions might’ve done serious damage to her brains.

Vip tells TMZ that some of the difficulties that Khyati’s experiencing “are cognitive in nature and lead to suspicion of a neurological head injury.” Vip also said the Billboard Music Awards were wrong for giving Khyati a piddly little ice pack for her head injury instead of rushing her ass to the ER. She is waiting for her test results and if there is any evidence of damage done to her brain, then it will be payday, bitches.

Khyati not only suffered injuries to her head, but she will forever be known as the poor girl who almost got her head ripped off by Miguel’s weapon of mass destruction (aka his leg). It’s kind of obvious that she suffered some kind of brain injury, because right after Miguel almost killed her, she said that she was a huge fan of his. She obviously wasn’t in her right mind, because at that moment she should’ve only been a fan of Larry H. Parker and ambulance who will take her to the hospital to get her head checked out. Give Khyati all the moneys!

And I’m sure Miguel’s lawyers will argue that he obviously suffers from some serious brain damage himself and look at him, he’s a star and performed at the Billboard Music Awards! When dumb stupid buffoon Miguel violently teabagged a girl at the Billboard Music Awards, I started to countdown from 10 and figured that when I got to 5, Gloria Allred would’ve already announced in a press conference that the girl is suing his ass for zillions of dollars. Well, it took longer than I thought and Gloria Allred, surprisingly, isn’t involved, but the girl is getting close to dropping a lawsuit right on Miguel’s head.

Khyati Shah, the chick whose head became the meat in a Miguel and stage sandwich, hired lawyer Vip Bhola and he tells E! News that she’s been experiencing psychical “difficulties” since the Billboard Music Awards and is considering legal action. Vip says that Khyati’s doctors are going to examine her injuries and once they get the results back, they’ll decide whether or not to sue. Vip hasn’t spoken to Miguel’s lawyers yet, but he says he’s open to settling out of court.

Shortly after, Miguel kicked one girl in the face and nearly decapitated Khyati, they were both interviewed backstage:

Khyati made the mistake of going on camera and smiling like everything was peachy cream (copyright: Jennifer from Basketball Wives). I’d have a brace on my neck, a cast on my head, a metal back brace on my body and I’d be sipping Ensure while sitting on a wheelchair. If they interviewed me backstage, I’d be like, “Huh? What? Who are you? Where am I? The pain! The pain! Jesus, is that you? Jesus, hug me, I’m ready!” Then I would’ve sued Miguel, Billboard, the venue and Sir Isaac Newton.

Miguel should’ve known better. He really thinks he’s Prince and Janelle Monae. Prince wouldn’t have only landed that jump, but he would’ve done so while wearing 10-inch glossy heels. Leave the stage jumps to the professionals, Miguel.

FYI: RiRi Loves The Pain Of Having A Brazilian Wax If you woke up this morning and told yourself that your day is incomplete unless you hear about RiRi’s waxed coochie box, you’re in luck. Your day won’t be incomplete! When RiRi was with Chris Brown, her chocha hairs burned off at the sight of his face. But now that she’s no longer with Chris Brown, she keeps her crotch as smooth as a naked mole rat’s armpit by getting a Brazilian wax.

Some chicks say that getting a Brazilian wax is as pleasant and comfortable as riding a crocodile naked, but the chicks that I know that have gotten a Brazilian wax have all said that it’s not that bad. (Maybe they just have the crotch of a viking?) Since we’re on the subject of crotch grooming, one friend told me that her friend’s puss lips once got caught in an Epilady. That dumbass is obviously an amateur, because I’ve used an Epilady several times and it’s never gotten caught on my droopy as- I’m going to stop.

Anyway, the staff at Fuzz Wax Bar in Toronto tells The Daily Star (via Zap2It) that RiRi came in for a Brazilian wax and told them that she didn’t want any numbing cream, because she loves the pain of it all.

RiRi refused the numbing cream they apply as a standard process. “No way, I love the pain,” Rihanna tells the esthetician. “It feels good to me.”

On top of that, she never screeched or squealed during her full-bore bikini wax. The salon staff says the walls are very thin, so they could tell Rihanna was actually enjoying herself. “She was singing and humming songs all through the treatment,” says the source. “None of us could stop laughing.”

Now you know where to go if you want to get your flower waxed in a place where the walls are so thin that everyone can hear you scream in pain (or goat yodel with pleasure if you’re RiRi).

I’m actually surprised to hear that RiRi feels any kind of sensation down there. I’d think that fucking Chris Brown’s nasty ass for all those years would’ve left her snatch traumatized, numb and scared for a while.

Here’s RiRi patting her freshly waxed bits while performing in Bilbao, Spain the other night.