Drake And Rihanna Are Over (Sort Of), Again 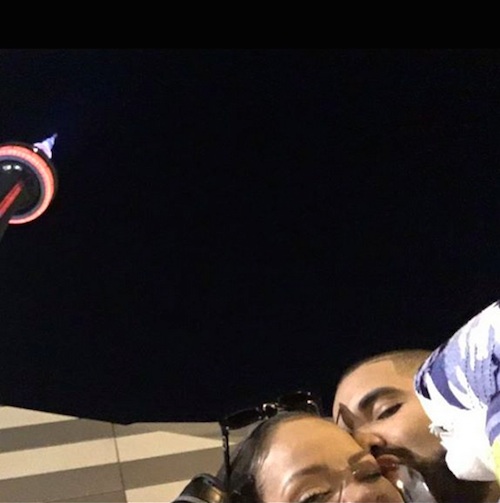 Sorry Toronto’s CN Tower, but it looks like you won’t be lighting up in pink and red to announce the marriage of your Prince to his Princess any time soon.

Back in May, there were rumors that Drake and Rihanna had been humping each other for several months. They sort-of confirmed that rumor a bunch of times throughout the summer. They went to clubs together. Drake made a joke about knocking Rihanna up. Drake went full Jared commercial while presenting her with the Video Vanguard Award at MTV VMAs. They even brought ten tons of So In Love couple realness on stage during tour stops. Sadly, Drake never got the chance to gross out his family members by romantically feeding forkfuls of gravy-soaked turkey to Rihanna at Canadian Thanksgiving Dinner over the weekend.

Both E! News and UsWeekly are reporting that Drake and Rihanna’s on-again/off-again relationship is once again in the “off-again” phase. Pray for the absorbancy of Drake’s emotions-collecting pillow; I’m sure it’s going to be collecting a lot of sad tears this week. A source says that RiRi pulled broke up with Drake because she doesn’t want to be “held down.”

Another source says that they’ll always be close and that they might end up together, they’re just not together right now. A source tells E! that both Drake and RiRi are currently seeing other people. Drake is batting his eyelashes at model India Love, who he might have gotten with Addicted to Love-style after Rihanna maybe-cheated on him with India’s ex Cliff Dixon.

However, People has another take on this situation. They say Drake and Rihanna haven’t broken up, they just have an open relationship. A source tells People that Drake and Rihanna are still a thing, but that the metaphorical doors to their crotches are open and accepting applications at the present time.

For reference, this is what Drake’s new lady India Love looks like.

Part of me feels bad for India, because no matter how many boners Drake is getting for her, the biggest hardest boner his heart will get will be for Rihanna. On the other hand, who cares? Drake is rich and famous. Drake also commits to the cute boyfriend thing 100%. That picture way up top was taken after Drake took Rihanna on a date to the aquarium. Drake bought Rihanna a stuffed shark from the gift shop, and I bet he paid extra to pet the stingrays too. Get that good boyfriend business, India! Pet all those stingrays!

Tags: Another One Bites The Dust, Drake, Rihanna
SHARE
Our commenting rules are pretty simple: Don't be racist or bigoted, or go way off topic when not in an Open Post. If you see an offensive or spammy comment you think should be deleted, flag it for the mods and they'll be forever grateful and give you their first born (although, you probably don't want that).
src="https://c.statcounter.com/922697/0/f674ac4a/1/"
alt="drupal analytics" >