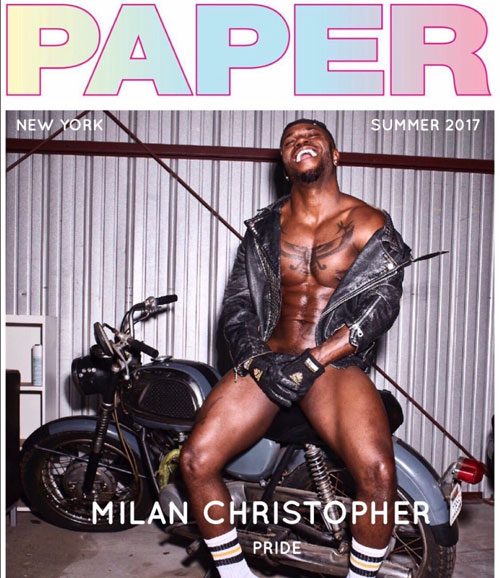 I’m pressing pause on my regularly scheduled program of making bad dick jokes and slobbering at the mouth about dick like dick is the only thing that matters (it is) to bring you pictures of an actual dick!

Milan Christopher is an out and proud hip-hop artiste, model and Love & Hip Hop: Hollywood cast member, and he decided to celebrate Gay Pride Month by bringing out the Wienerschnitzel franchise on his crotch for Paper Magazine. Milan tells Paper that he decided to let his south-pointing lubed-up salchicha hang out for the sake of activism. Milan feels like it’s time for society to be okay with the sight of a greased-up naked man. Sure, Milan bared his perfectly pruned dick shrub (which is giving me Kid from Kid ‘N Play meets Bart Simpson) and oily peen for attention, but he is still my hero. Anybody who uses his big dick as a sledgehammer to break down barriers and pave the way for more dicks in photo shoots is a real vanguard to me. Milan is putting the PEEN in pioneer. NSFWness ahead.

END_OF_DOCUMENT_TOKEN_TO_BE_REPLACED Tom Hardy is many things: an actor, a producer, a friend to puppies and a member of history’s greatest webcam hos. And now The Sun says that he’s also a heroic cock catcher.

Today, The Sun delivered an amazing story about how Tom Hardy single-handedly busted my favorite kind of arrest, a CITIZEN’S ARREST, on a thief in the London suburb of Richmond. Tom also loudly called the thief a “cock.” If you’re saying, “But Michael, you stupid, this is from The Sun, so it’s probably not true,” then I need to tell you to shut your fun-hating lips and stop ruining it for those of us who want to believe that a story about Tom Hardy catching a cock is true! Besides, the cops say it happened.

END_OF_DOCUMENT_TOKEN_TO_BE_REPLACED As Duchess Kate sat in her royal hair brushing salon (yes, she has one of those) at Kensington Palace this morning, she started to do the usual 100 brushes she does every day and when she got to 8, the rage inside of her boiled over and she slammed down her silver princess brush before screaming so loud that Prince George awoke from his deep slumber, sat up and thought, “Err, isn’t screaming my thing?” Duchess Kate knows she married the wrong British prince, because Prince William’s weak ass never defended her like this. She’s so going to switch Prince William’s hair growing vitamins with laxatives.

A quick second after everyone heard the rumor that Prince Hot Ginge betrayed my loyal heart (it’s okay, I still have my DIY Prince Hot Ginge Pillow Person) by getting serious with Rachel from Suits (government name: Rachel Meghan Markle), the tabloids got to work. The paparazzi stalked Meghan’s mom, The Sun allegedly got an interview with her half-sister (who called her a superficial fame whore), they got all Ancestry.com by writing about her ancestors and The Daily Mail shit out this wreck of a headline: Harry’s girl is (almost) straight outta Compton: Gang-scarred home of her mother revealed.

Since the rumor came out over a week ago, Meghan and the royals haven’t said anything, but Prince Hot Ginge had enough and this morning, he lifted his royal shield of honor to try to block the shit balls that the media and trolls are throwing at his lady love. The dusty DOS machine that operates my emotions is shaking and spitting out smoke, because it doesn’t know whether to swoon myself inside/out over PHG romantically defending his girlfriend or spit out rays of jealousy at Meghan over PHG romantically  defending her.

END_OF_DOCUMENT_TOKEN_TO_BE_REPLACED

Madge Is Living The Life!

“Why do I hear what sounds like the screams of a dozen boy toys?” said everyone in the room when Madge spread-eagled.

A few days before Madge maybe-sunk her fangs into Idris Elba’s flesh at some club, she was at an art exhibition, where she did a reboot of her highly artistic “drunk clown” act by rolling her horny ass around on the floor while dressed up like a fancy biker. The Daily Mail posted screen shots from an Instagram video that was taken at Mert Alas and Marcus Piggott’s photo exhibition at Phillips Auction House in London. The Daily Mail says that guests were SHOCKED by Madge acting a mess and crotch-fucking the air. Okay, you show me a guest who was “shocked” by Madge acting like Madge, and I’ll show you someone whose permanent address has been “1544 Under A Rock Lane” for the past few decades and doesn’t know that she’s a giant attention whore.

But really, Madge is usually out of touch, but this is the first time in a long time that I’ve completely related to her.

When you find yourself at a boring art show, the best way to pass the time is get a glass of ro-zay, get on the floor and kick, stretch and kick. Keep fucking that chicken, Madge!

Tags: Madonna, MESS, My Hero, What A Fucking Lady
SHARE

Since Kate Hudson is hawking workout clothes and trying to be all sporty and shit, it’s time for all of her to get completely on brand and that includes the tastes of her legendary coochie. So it makes sense that Kate Hudson might be climbing aboard the 6’5″ football playing mountain named J.J. Watt. Kate Hudson’s chocha needs a travel blog NOW, because I really want to see the places it visits.

Kate Hudson may have either finally dropped Nick Jonas as a fuck buddy, or she has temporarily pushed that Jonas peen to the side. Because everyone seems to think 36-year-old Kate may have started dating 27-year-old J.J., who plays for the Houston Texans. Kate and J.J. are the ones who started the dating talk. I guess they wanted everyone to know that they were on a date, because last night, J.J. made an appearance on one of her Snapchat videos during dinner at a restaurant. The video is annoying, but J.J. calls it a “date.”

Major update: He called it a DATE! 😲😲 #jjwatt #jjwattladies

UsWeekly says that this morning, Kate put up another Snapchat video where she brought up the date while hanging out with her son Ryder. At one point, Kate said to him, “How does it feel that mommy got to sit next to J.J. Watt at dinner?” Slap yourself until you’ve developed a sense of real taste if you thought I was calling Cate Blanchett the “best-dressed person” at the Oscars. Although, she may be a close second, because she looks like the ethereal wedding cake of two faeries who are on Pinterest a lot.

I’m talking about two-time Oscar-winning and one-time Hot Slut winning costume designer Jenny Beavan who picked up her second Academy Award on Sunday night while dressed like she had a Hell’s Angel pot luck to get to afterward. Jenny is known for slathering herself in many layers of WHO CARES when she goes to an awards show. And after she won the Oscar for the costumes she designed for Mad Max: Fury Road, she told reporters backstage that a gown would look dumb on her and in her opinion, she did dress up.

Because this has become news, Jenny wrote a piece for The Hollywood Reporter about the scandal that her hot outfit caused.