As Christmas quickly approaches, I’m convinced Kanye West is really Santa, because he continues giving out the unwanted gift of his words to the world. Or maybe I’m having trouble rearranging words myself, because when I typed Santa, I should have typed Satan. How else could you explain his cruel and callous statement alleging the brutal murder of George Floyd by police was actually caused by a Fentanyl overdose? Someone throw this dude on Jeff Bezos’ dick rocket and fling his ass into deep space because I think his time is up here on Earth. But before we send Kanye away, let’s allow George Floyd’s family, on behalf of his child’s mother Roxie Washington, and their daughter Gianna, to win their $250 million lawsuit against him first.

END_OF_DOCUMENT_TOKEN_TO_BE_REPLACED

“Cops” Is Back After Being Canceled Last Year Last June, in the wake of George Floyd’s murder and the Black Lives Matter protests, the Paramount Network canceled Cops after 32 seasons. Phew, right? Sigh, wrong. The streaming service Fox Nation (a spin-off from Fox News, but of course) just announced that they’re dragging Cops back from hell; they’ve picked it up for a 33rd season, and it will premiere on October 1. So let me get this straight: we permanently lost canceled-too-soon classics like GLOW, Happy Endings, and Santa Clarita Diet (OK, “classic” is a strong word for that last one, but it was… fine), but they bring back Cops? COPS?!?!

END_OF_DOCUMENT_TOKEN_TO_BE_REPLACED 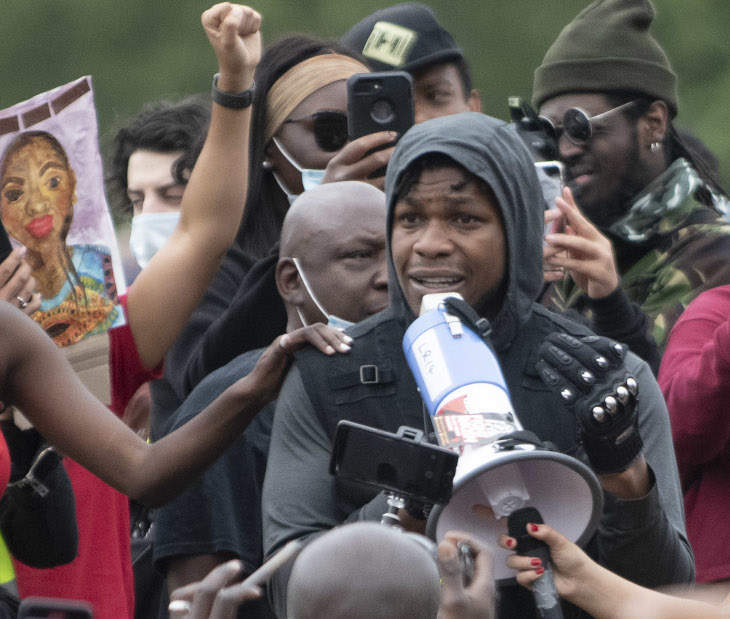 Back in June of last year when John Boyega was standing shoulder to shoulder with the throngs of people protesting police brutality and racial injustice, he stated that he wasn’t sure if his actions might jeopardize his career. Flash forward to June of this year and as IndieWire reports, John has exited from a starring role in the upcoming Netflix movie Rebel Ridge a week into filming under mysterious circumstances. Things got even more mysterious when this week on Twitter, John’s account lost its blue “verified” checkmark. Sources told The Hollywood Reporter that John disappeared without a trace and intimated that he was unprofessional. But Netflix and John’s agent have said he left for family reasons. John himself has not spoken out on the situation but whatever the case, John’s getting a lot of support on Twitter from folks who fear he is being blacklisted for speaking out against racism and for failing to kiss Baby Yoda’s ass with sufficient reverence.

END_OF_DOCUMENT_TOKEN_TO_BE_REPLACED Madonna’s 24-year-old daughter Lourdes Leon isn’t the only one in the family who can slap down a trick in Instagram comments. One woman named Karen decided to try Madonna in the comment section of an Instagram post about the police killing of 20-year-old Daunte Wright. Madonna snatched that Karen like her own cape snatched her at the Brit Awards years ago.

END_OF_DOCUMENT_TOKEN_TO_BE_REPLACED

Justin Bieber Responded To The Shit He Got For Using Clips Of Martin Luther King Jr. Speeches On His Album Last week, Justin Bieber got shit when he used clips of Martin Luther King Jr. speeches to introduce two of the songs on his latest album, Justice. Critics pondered why he’d use the audio at all, especially as a lead-in for a love song about Hailey Bieber. They accused him of being faux-woke and cashing in on Black Lives Matter. Conversely, MLK’s daughter Bernice King was all for it. On Tuesday Justin finally responded to all the criticism during an interview on the Bieber Nation Clubhouse.

END_OF_DOCUMENT_TOKEN_TO_BE_REPLACED

It has to be a felony to put those two names in the same sentence, so I’m a little fearful for my future right now. Justin Bieber, however, blithely goes about his day committing musical and fashion crimes of all kinds and manages to remain blissfully unfettered by concerns of consequences. Justin Bieber’s sixth studio album, Justice, was released yesterday, and in it, he uses clips of two speeches from Martin Luther King Jr. to introduce songs, including a love song. So, like Martin Luther King Jr., Biebs has a dream, and, as usual, it’s wet.

END_OF_DOCUMENT_TOKEN_TO_BE_REPLACED

Tags: Black Lives Matter, Crimes Against Humanity, Justin Bieber, Strange Bedfellows, Why Are You Doing This To Us?
SHARE
src="https://c.statcounter.com/922697/0/f674ac4a/1/"
alt="drupal analytics" >