END_OF_DOCUMENT_TOKEN_TO_BE_REPLACED

Michael Phelps Got Suspended From Swimming For Six Months I sometimes watch Dr. Phil (I know, I’m an idiot) and if I’ve learned anything from that super-smart talking walrus, it’s that people have a currency. As in, the thing which means the most to you. For example, my currency is Doritos. Michael K’s is heart-stopping elegance and sophistication. Obviously, Michael Phelps’ currency is swimming – the Geico Cavemen’s handsome half-brother loves to swim. So after getting busted for his second messy DUI last week and volunteering to go to rehab, People says that USA Swimming decided to punish Party Dolphin by suspending him from swimming for six months and forcing him to withdraw from next year’s world championships. They released this statement explaining why:

“Michael’s conduct was serious and required significant consequences. We endorse and are here to fully support his personal development actions.”

USA Swimming says that drinking and driving violates their Code of Conduct, so they also snatched away six months worth of his sweet government funding money. Damn, USA Swimming don’t play! Although really, they only give him $1,750 a month, so that’s – what – $10,000 gone? That’s nothing for Michael Phelps! Hell, that’s nothing for Mama Debbie – she spends at least $2,000 a month on tasteful statement necklaces from Chico’s.

The only real silver lining to all of this is that Party Dolphin already qualified for world championships in Russia next August, which is the thing you do if you want to compete for the Olympics. And since we all know Michael Phelps is the greatest swimmuh IN DA WORLD, this DUI mess probably won’t hurt his chances for taking home 1,864 more gold medals.

But what if there’s a swimming pool at rehab? Isn’t there always a fancy infinity pool at fancy rich person rehab? If you’re going to go through the mental and emotional distress of draining every ounce of party out of your system, at least they can try to make things a little better by letting you get your splish-splash on. So will USA Swimming be hanging out around the pool at Phelps’ rehab to make sure he doesn’t swim? Can he at least be allowed to float on a pool noodle or play marco polo? At least give him marco polo!

Michael Phelps Is Swimming Off To Rehab After getting caught for the second time driving too damn fast and drunk out of his damn dolphin mind, the gold medal-winning DURRR-looking water baby Michael Phelps will do the backstroke all the way to rehab. TMZ says that earlier this morning, the Geico Cavemen’s athletic younger half-brother dove onto Twitter (ok, I’ll stop with the swim jokes now) to grunt out another “I so sowwy” and confess that Mama Debbie will be driving his dumb double DUI ass to the ‘hab so he can dry out (that doesn’t technically count as a swim joke, right?)

END_OF_DOCUMENT_TOKEN_TO_BE_REPLACED 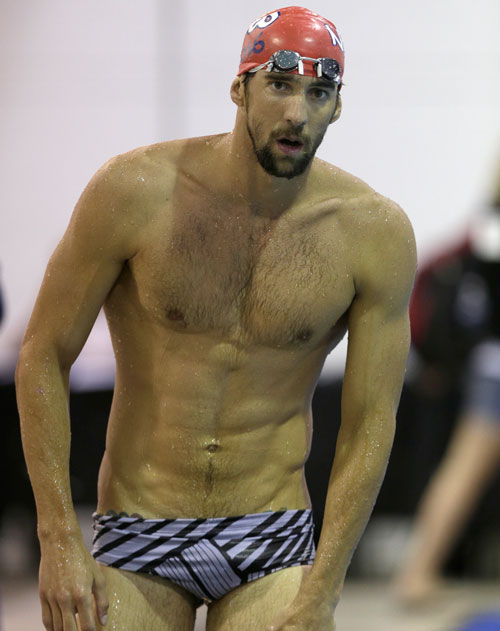 I know that celebrity deaths supposedly comes in threes, but do celeb whore DUIs really need to come in threes too? Two days after Amanda Bynes got put into handcuffs for driving while allegedly high on Adderall, the Geico caveman with a buzzcut known as Michael Phelps was arrested on suspicion of DUI in Baltimore, Maryland this morning. Bitch swims like a fish and drinks like a fish. Moron should’ve swam home! Something tells me that Debbie Phelps is not having a Chico’s kind of day today. Michael Phelps is to blame and he should be jailed for life for that.

The Baltimore Sun says that Michael Phelps’ white Range Rover was pulled over at around 1:40am on Interstate-395 after he was clocked by an officer’s radar going 84mph in a 45mph zone. The officer checked Michael Phelps’ speed while his dumb ass was going through a tunnel. During the stop, the officer noticed that the Cro-Magnon dolphin seemed drunk. In Michael Phelps’ defense, he always has that dead-eyed derp look about him. But Michael was plastered and according to the cop, he failed a series of standard field sobriety tests. He was arrested and charged with DUI, excessive speed, and crossing double lane lines. He was later released.

This is Michael Phelps’ second DUI. In 2004, he got caught drunk driving and later pleaded guilty in exchange for 18 months probation.

Well, the good news is that Animal Planet’s eventual biopic of the Olympian dolphin starring Adam Driver just got juicier.

TMZ asked Michael Phelps’ fellow Team USA teammate Ryan Lochte about this mess and he dribbled this out:

“I’m not concerned … he just makes dumb decisions. He has so much money to get a driver. I even have a driver. Just stinks for the sport of swimming. But he will become smarter from this. Luckily he did not hurt himself or someone else.”

When Ryan Lochte, whose head is filled with nothing but chlorine water and Cool Water fumes, comes off as the voice of reason and calls you out for making dumb decisions, then it’s time to swim off to a corner of the pool to get it together.

“Earlier this morning, I was arrested and charged with DUI, excessive speeding, and crossing double lane lines. I understand the severity of my actions and take full responsibility. I know these words may not mean much right now but I am deeply sorry to everyone I have let down.”

Crystal Harris Went Through With It This Time It’s a Happy New Year for Hugh Hefner. No, the medical community didn’t introduce a colostomy bag that doubles as a Viagra injector. Crystal Harris‘ trick ass stayed around for their wedding last night! Hef, 86, and his engagement ring-collectin’ ladyslave, 26, tied the knot in a small ceremony at the Playboy Mansion right before Playboy’s annual NYE party. It doubled as their wedding reception, according to TMZ.

Can you blame Hef for going for the twofer on parties? The last time he put a ring on this fickle ho’s finger, she took it, jumped the wall and told everyone how truly disgusting it was having sex with a flaccid mummy on a Hoverround. And then she pawned that ring! Cold-blooded.

He must really be in love to take her back and buy her another bauble. Either that or he has her family imprisoned in the secret dungeon under that grotto. Whatever works, Hef.

These pics are from Crystal’s Twitter and Instagram. Check out the one from the ceremony. Hef has an equally ancient friend standing up for him. It’s very Brothers Grimm, with the wizened warlocks and terrified-beyond-reason village slut being forced into marriage.