Open Post: Hosted By Ina Garten’s Skepticism Of The Significance Of Bay Leaves When Ina Garten isn’t fielding steamy texts from her husband Jeffrey Garten, she’s Cooking For Jeffrey. Ina loves to host dinner parties for negligible-to-most reasons to celebrate–like the 37th anniversary of the time she and Jeffrey got caught over-the-pants rubbing at the drive-in. But even though Ina is an old pro in the kitchen, she couldn’t give a definitive answer when someone pondered the usefulness of bay leaves in any recipe that calls for them.

END_OF_DOCUMENT_TOKEN_TO_BE_REPLACED

Open Post: Hosted By Ina Garten’s Husband, Jeffrey, Accidentally Sending A Love Text To Someone Who Wasn’t Her If you’ve ever seen Ina Garten’s cooking show, Barefoot Contessa, you probably gathered that she loves two things: using the hardest-to-find, most pretentious ingredients in her recipes and her husband of over 50 years, Jeffrey Garten. Jeffrey was a fixture on the show; most of the time, Ina was cooking for him or for an occasion centered around him, which was likely her chosen method of foreplay since it’s clear that the two of them like to get it in. Apparently, Jeffrey’s approach to getting Ina as moist as her famous roast chicken is with his words; and if you can’t deliver Ina a heartfelt letter using handmade heavyweight ylang-ylang scented stationary with a seal made from the wax of Madagascan bees, a cringey sexual boomer text sent to the wrong person is fine.

END_OF_DOCUMENT_TOKEN_TO_BE_REPLACED Inside you there are two wolves. They’re both wealthy, bourgeois wolves, but they are wolves just the same. These wolves two, have been pitted against each other in a battle to the death by Reese Witherspoon, a mere cub who knows not what carnage she hath wrought. A couple of weeks ago, Reese shared what she thought would be an inspirational post about healthy habits to bring into the new year. And now, because of Reese’s almost criminally banal post, Martha Stewart and Ina Garten are at each other’s necks over how best to deal with the COVID-19 pandemic stress. Ina says drink your cares away, advocating for “more large cosmos.” Martha does not agree with “taking to drink,” nor does she find it charming. Martha says work your cares away, advocating for her new Chardonnay collab. So go ahead and pick your fighter. Chardonnay or cosmo? CHARDONNAY OR COSMOS? And don’t you dally, the fate of a weary world hangs in the balance!

END_OF_DOCUMENT_TOKEN_TO_BE_REPLACED If you’re outside in NYC right now, then take your dumb ass inside NOW, you’re not supposed to be out. But while you run inside, watch for falling coochies since the poons of Carrie Bradshaw, Samantha Jones, Charlotte York, and Miranda Hobbes blew off in excitement after seeing the recipe for Ina Garten’s breakfast time cocktail for one.

Ina Garten tried (emphasis on “tried“) to come for Sandra Lee’s title of Queen of Cocktail Time by whipping up a Godzilla-sized cosmopolitan. But please, Sandra Lee is looking at that amuse bouche of a cocktail like, “Awww, did that tiny thing come from the children’s menu? Cute.”

END_OF_DOCUMENT_TOKEN_TO_BE_REPLACED

Open Post: Hosted By Seth Meyers Getting Drunk With The Barefoot Contessa If you don’t have your own distillery, dive bar-bought whiskey is fine…I guess? Since Martha Stewart has a leg up in the millennial department by latching herself to Snoop Dogg and implying she’s a rich white lady stoner, Ina Garten has to do something beyond hang out with Taylor Swift to show she’s a cool old broad. So she went day drinking with Seth Meyers. As part of his sometimes day-drinking segment, Seth had Ina meet him at the Corner Bistro in the West Village to toss back a few of her favorite cocktails and then talk shit on fast food condiments.

END_OF_DOCUMENT_TOKEN_TO_BE_REPLACED

Ina Garten Talks About Why She Doesn’t Have Any Kids 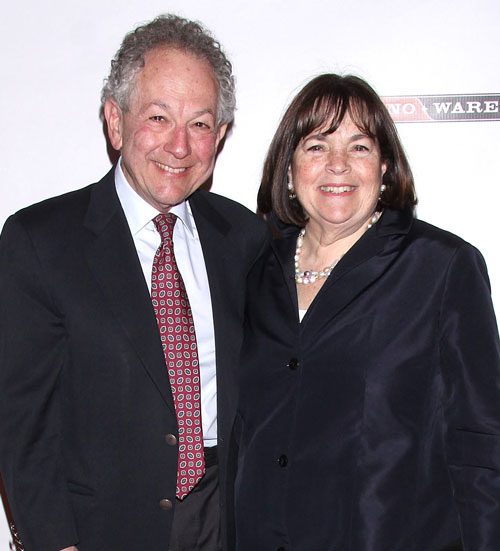 Ina Garten, host of Barefoot Contessa and chef who always makes my lazy ass feel guilty for using store bought tomato sauce, is the secondary star of her Food Network empire. The real star is, of course, her husband of 48 years Jeffrey Garten. Every time Jeffrey pops in to their home in East Hampton, they’re all over each other like a bunch of horny teenagers. They seem like the type of couple who have a dozen kids that still have nightmares of seeing their mom and dad sneak a bowl of strawberries and a canister of whipped cream up to their bedroom. But they don’t have any children.

69-year-old Ina recently revealed during a recent appearance on Katie Couric’s podcast (via People) that not having kids was something she and 71-year-old Jeffrey specifically chose not to do. I can hear the people at Make-A-Wish saying, “Oh, is it because you hate children???”  It’s because Ina wanted to be a professional food person.

“We decided not to have children. I really appreciate that other people do and we will always have friends that have children that we are close to but it was a choice I made very early. I really felt, I feel, that I would have never been able to have the life I’ve had. So it’s a choice and that was the choice I made.”

Ina made a smart choice. Kids get into everything, and there’s no way she’d be the Ina we know today if she had kids. Telling viewers “This is where I’d add a pinch of really good saffron, but those little brats dumped it all on the carpet” just doesn’t have the same relaxing ring to it.