Lots of Famous People, Like Usher And Taylor Swift, Are Calling For Juneteenth To Be A National Holiday Today is June 19th, aka Juneteenth, a holiday that calls for both celebration and sobering reflection, while examining the history (and ongoing history still being written) regarding slavery in America. My Canadian public school education failed to teach me that slavery wasn’t technically abolished until June 19th, 1865, when slaves in Texas were finally made aware of the Emancipation Proclamation two years earlier. Juneteenth has been observed since 1866, and was more widely recognized starting in the 1970s, but the conversation around Juneteenth is significantly louder this year, due to the ongoing activism surrounding Black Lives Matter and anti-police brutality protests. And according to some people, like Usher and Taylor Swift, it’s high time Juneteenth became an officially recognized national holiday in the United States.

END_OF_DOCUMENT_TOKEN_TO_BE_REPLACED

Justin Bieber Admits He Has Benefited From Black Culture Justin Bieber’s Instagram page looks like a Black Lives Matter Bingo card at the moment which I have to chuckle at, but I’m not going to criticize. I would rather see a million pleas for the arrest of the police officers who killed Breonna Taylor than one single #blessed image of Justin’s marital bed. And to his credit, in his most recent post, Justin has taken the unusual step of acknowledging that he’s inspired by and has benefited from Black culture, probably sending The Kardashians into a white hot panic to get their lawyers to send him a cease and desist letter. Which is crazy because you’d think by this point in her legal education, Kim could handle a simple C&D herself.

END_OF_DOCUMENT_TOKEN_TO_BE_REPLACED

The Weeknd Accused Usher Of Ripping Him Off 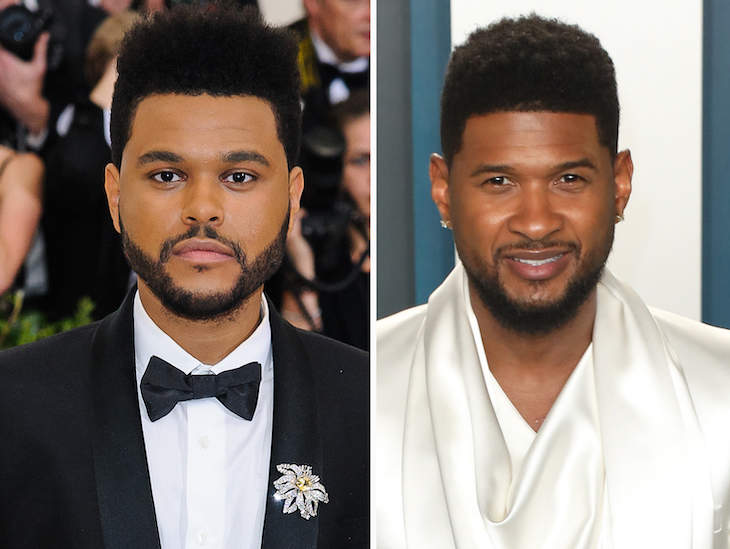 No, Usher hasn’t dropped the E and started going by Ushr. This has to do with music. The Weeknd recently spoke to Variety to promote his latest album, After Hours. The interview took a little detour when The Weeknd decided to publicly accuse Usher of copying him.

END_OF_DOCUMENT_TOKEN_TO_BE_REPLACED

FKA Twigs Wanted To Sing During The Prince Tribute At The Grammys, But They Didn’t Ask Her Ass Jehovah’s Sexiest Witness became the Afterworld’s Sexiest Resident in April 2016, and at the next Grammys in 2017, they paid tribute to him with a performance from Bruno Mars and The Time. And at last night’s Grammy Awards, they paid tribute to him again, and while I think every Grammy Awards should have a Prince tribute, I wondered why exactly they were doing one. Turns out, it was an informercial to promote the Grammys tribute concert to Prince that will record tomorrow and air on CBS later this year. Usher is a part of the Grammys tribute concert, so he did the tribute last night, and I give that entire dull glitter mess of a performance 5 out of 5 Prince side-eyes:

And that bland tribute mostly got 5 side-eyes due to Sheila E getting pushed to the back, and FKA Twigs being used as a glorified Usher back-up dancer. And she claims it wasn’t her choice to not sing.

END_OF_DOCUMENT_TOKEN_TO_BE_REPLACED Usher is taking some legal action of his own against one of the people accusing him of giving them herpes. During a recent deposition in the case of Usher being sued for allegedly being fast and loose with his peen-maintenance–one of Usher’s accusers refused to answer questions and now Usher is saying she needs to be fined and he can come to collect the $2,500 he’s owed at the court’s earliest convenience.

END_OF_DOCUMENT_TOKEN_TO_BE_REPLACED I’m not exactly sure what the hell is going on with Usher these days but he’s been doing way too much. Perhaps he’s still celebrating the recent victory in his herpes lawsuit, or maybe he’s just rich and bored. Either way, this dude is seriously transitioning into the text book definition of mid-life crisis. And instead of buying an expensive sports car or constantly hitting on young chicks in the club (because that’s probably how his ass got in trouble in the first place), 40-year-old Usher has decided to say, “fuck the future!“, by permanently ruining the back of his neck with a tattoo that looks like a pentagram for witches at MIT.