END_OF_DOCUMENT_TOKEN_TO_BE_REPLACED

Sinead O’Connor Is Retiring From Recording And Touring Sinead O’Connor is officially OVER. IT. After a week of telling more alleged horror stories about Prince, Sinead downed a few whiskey drinks and took to Twitter to announce that she is retiring from the music biz, including touring and recording. Her upcoming album No Veteran Dies Alone will be her final release. Sinead says at age 54 she’s “gotten older” and she’s tired of playing clubs with no toilets and pissin’ in alleys (fair). She assures fans it’s not sad news; it’s actually “staggeringly beautiful news,” and “a warrior knows when he or she should retreat.” Deep.

Sinead adds that all her 2020 shows that were Corona-postponed and rescheduled for 2022 will also be canceled. So that idyllic post-COVID world we all imagined… where we can go to an indoor Sinead O’Connor concert with all our friends and family? That dream is dead. END_OF_DOCUMENT_TOKEN_TO_BE_REPLACED END_OF_DOCUMENT_TOKEN_TO_BE_REPLACED

Sinead O’Connor Is In A Bad Place, Both Mentally And Physically (UPDATE) Don’t let that stunning cityscape behind Sinead O’Connor fool you. She’s not sitting on a private boat somewhere in the Hudson River, marveling at the sunset. She’s in a motel room in New Jersey, and she’s really sad right now. And no, she’s not sad because she’s stuck in New Jersey (although that’s definitely part of it).

END_OF_DOCUMENT_TOKEN_TO_BE_REPLACED 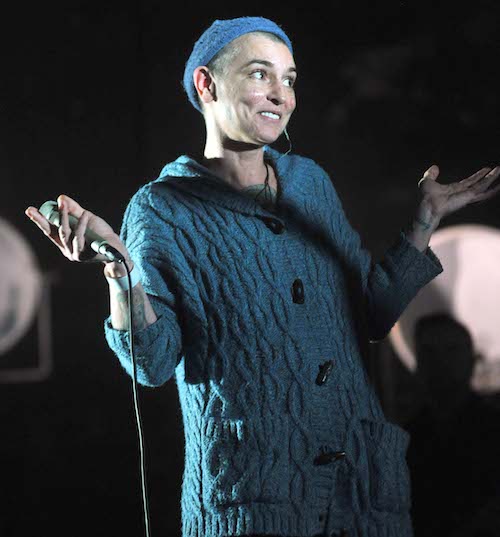 Sinead O’Connor found herself on the receiving end of a $5 million defamation lawsuit from Arsenio Hall in May 2016 after she suggested on Facebook that Prince died from drugs that were supplied to him by his “bitch” Arsenio. She also alleged that Arsenio once tried to drug her drink at a party at Eddie Murphy’s house years ago. Initialy, Sinead responded to Arsenio’s lawsuit by telling “Arse-inio” to suck her dick, but only if he wasn’t “too busy sucking someone else’s dick.” Sinead’s feelings have now changed.

END_OF_DOCUMENT_TOKEN_TO_BE_REPLACED DNAinfo Chicago says that the police are once again searching for Sinead O’Connor after she went messing and reportedly told family members in Ireland some disturbing shit. The cops in Dublin contacted the cops in Chicago and told them that Sinead was suicidal. Chicago PD issued two all-call radio messages to officers today, telling them to be on the lookout for Sinead. Sinead told her family members that she was on a bridge in Chicago and was going to jump. This is the message that has gone out to the police:

“All units stand by for the All Call message. … Word from Ireland police Sergeant Claire Mulligan, Dublin, Irleand, is saying that at 15:30 hours Sinead O’Connor called and said ‘I’m on a bridge in Chicago and I’m going to jump’. If officers could keep an eye out for the celebrity.”

TMZ adds that the cops spotted someone who they thought was Sinead but it turned out not to be her.

Last May, Sinead went missing after going for a bike ride in Wilmette, which is a suburb of Chicago. Sinead is currently staying in the Chicago area with friends. The cops were told that Sinead may be suicidal. She was later found safe in a hotel in Chicago. Sinead has also been going through it lately. She’s in a custody battle with her ex Donal Lunny over their 12-year-old son Shane. And she’s still dealing with the lawsuit that Arsenio Hall threw at her for saying that he was Prince’s drug pusher.

Hopefully, like last time, Sinead is currently safe in a Chicago hotel room where she’s either crank calling “Arse-nio” or better yet, writing a sequel to her adventures with the difficult brown, because many of us have been waiting for years for one.

UPDATE: Sinead made a grand return to Facebook to deny that she wanted to off herself. She’s jumping, but she’s not jumping off of a bridge. She’s jumping for joy about BREXIT.

Anne Harris…. YOU JUST GOT FUCKED BY GERRY ADAMS!
IRELAND IS OFFICIALLY NO LONGER OWNED BY BRITAIN!!!!
CONGRATS TO EVERY MAN, WOMAN AND CHILD WHO EVER DIED FOR THE CAUSE OF IRISH FREEDOM, AND ALSO TO ALL THOSE INCLUDING MYSELF, WHO HAVE BEEN PERSECUTED MERCILESSLY BY THE IRISH SO CALLED FREE-STATE FOR HAVING DECLARED SUPPORT FOR SINN FEIN AND THE REPUBLICAN MOVEMENT.
OUR DAY HAS COME !!!!!!!
(Oh and by the way it’s bullshit I jumped off a bridge, some stupid bitch up at Swords Garda station decided she’d like to throw a bit of false and malicious gossip about is all). AM FAR TOO FUCKING HAPPY FOR THAT!!
IRELAND 4 ENGLAND 0!!!