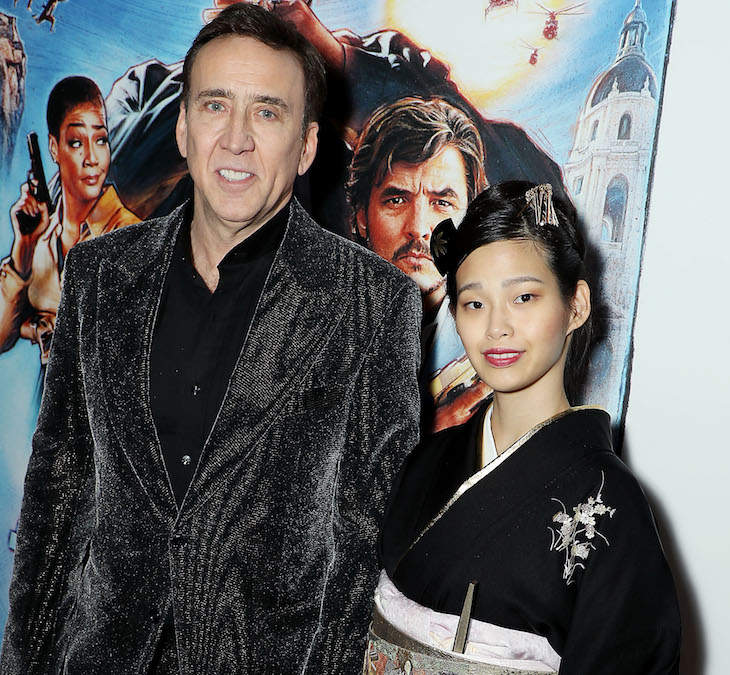 People is reporting that Nicolas Cage and his wife Riko Shibata have welcomed their first child together, daughter August Francesca Coppola Cage. Baby August arrived yesterday, making her exactly one week off from actually being born in August. And one day off from being a potential vessel for the reincarnated soul of THE QUEEN. So close! END_OF_DOCUMENT_TOKEN_TO_BE_REPLACED Nicolas Cage was interviewed for the April issue of GQ, and it’s exactly what you’d expect from a long-form celebrity profile on Nic Cage: pointing out all the eccentric knick-knacks in his house, dissecting the highs and lows of his wild career, and philosophizing about life, death, and illegal dinosaur bones. In the piece Nicolas, 58, once again confirms that Wife #5, 27-year-old Riko Shibata, is the final Mrs. Cage. He also reveals what they’re planning on naming the bun in Riko’s oven. Nic’s sons are Weston, 31, and Kal-El, 17. By this logic, each kid gets an exponentially weirder name, right? WRONG. After Nicolas realized “X Æ A-Xii” was already taken, he settled on weird-lite options: Akira Francesco if it’s a boy and Lennon Augie if it’s a girl.

END_OF_DOCUMENT_TOKEN_TO_BE_REPLACED No matter how weird he gets, women keep marrying Nicolas Cage. His latest wife is 27-year-old Riko Shibata, who said “I do… want to eventually divorce you” to Nicolas last February. But Nicolas, 57, says Wife #5 Riko is a keeper. He tells The Los Angeles Times, “I know five is a lot, but I think I got it right this time.” Awww, bless your heart, you old five-timer, you!

END_OF_DOCUMENT_TOKEN_TO_BE_REPLACED It’s a good thing Nicolas Cage was probably going to use his own wardrobe anyway for his portrayal of Joe Exotic in the series for Amazon that was announced last year. Variety reports that that project has been cancelled so Nic will just have to find another excuse to bust out the sequin blouses and leather fringe. Unfortunately they didn’t make an appearance at last night’s premiere of his latest movie Pig. Nic kept things shockingly demure when he and his 5th wife, 26-year-old Riko Shabata, made their red carpet debut as man and wife. I don’t know which is more shocking, that he dressed like a normie, or that he has managed to stay married for 4 whole months! He even washed and pressed his good rug for the occasion. It must be true love.

END_OF_DOCUMENT_TOKEN_TO_BE_REPLACED

Nicolas Cage And His Busted Wedding Tuxedo Walked Down The Aisle A Fifth Time, And No, He Didn’t Marry The Tuxedo 57-year-old serial husband, part-time actor, collector of freaky museum shit nobody needs, and proud owner of a pimped-out tomb that’s going to host his weddings in the afterlife, Nicolas Cage made another totally solid relationship decision and realized he was missing the peace, bliss, and security of married life. Naturally, he fetched his still-warm, get-hitched duds and proposed to girlfriend of one year, 26-year-old Riko Shibata, via FaceTime for a fresh, modern spin on a much-abused question. Then on February 16, the lovebirds’ swirly rays of Spring-Autumn passion lit up the Wynn Hotel in Las Vegas and they made it official.

This is Nic’s fifth round of “I do, at least until I don’t anymore” and Riko’s first, heady hit of gleaming, forever-and-ever metal on her ring finger. Call me cynical, but something tells me it won’t be her last.