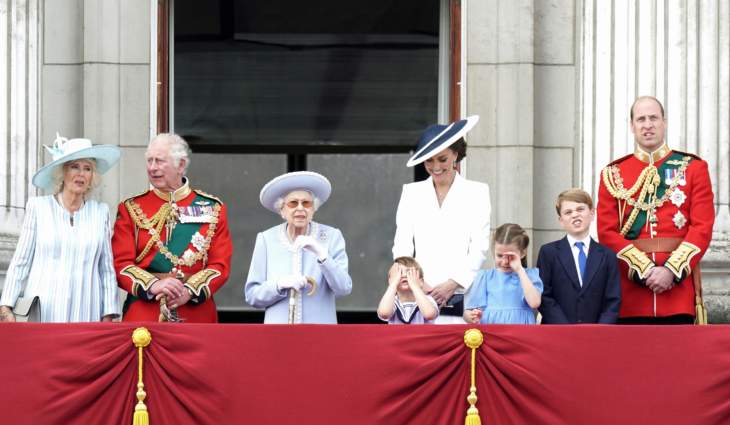 Trooping the Colour is an annual event dating back to the 1700s meant to mark the monarch’s birthday, which for The Queen was in April, and features a big ass parade (sadly not the good kind even though it’s Pride), a processional of the Royal Family riding around in carriages culminating with a balcony flypast by the Royal Air Force which I can all but guarantee Tom Cruise asked Prince William and Duchess Kate if he could do when they attended the Top Gun 2 premiere. I hear he was trying to get footage for Top Gun 3: Long Live The Stunt Queen. But Tom’s got a little competition in that department from young Price Louis. Louis was joined by his parents, great-grandmother, grandfather Prince Charles and that weird lady who keeps handing him a tampon whenever he asks her for some candy from her purse. He thinks she’s named Duchess Camilla or something but he tries not to get too involved. People reports:

Prince Louis was a mood — and is now a meme — on the Buckingham Palace balcony Thursday.

The 4-year-old royal, who stood alongside his big brother Prince George, 8, and big sister Princess Charlotte, 7, didn’t hold back at Trooping the Colour, the annual celebration of his great-grandmother Queen Elizabeth’s birthday.

The little prince could be seen alternately covering his ears with his hands during the noisy flypast, waving to the crowd and chatting with the monarch, 96, who appeared amused by his antics. Meanwhile, his mom Kate Middleton repeatedly reminded her youngest child to take his hands out of his mouth, at one point saying, “Good boy.”

Here are some of Prince Louis’ greatest hits including Say What?, Look I’m Prince Philip! and Who The Fuck Are All These People Anyway?

Before the balcony, the Royal Family participated in the processional where Prince Louis was again the center of attention when his sister Charlotte proved what we’ve all suspected for a while now, that she’s actually close personal friends with Blue Ivy Carter. Watch as she uses the same move on Louis that Blue Ivy used when her momma was trying to do too much.

People reports that 4-year-old Louis was wearing the exact same sailor suit Prince William wore to Trooping the Colour in 1985 when he was 2. LOL, all that money and they are dressing these poor children in hand-me-downs and rags. As for the Disney’s Elephant featurette in the room, being inside meant Megan and Harry were free to roam the halls of Buckingham Palace and apparently came upon The Queen’s secret Mummy Room. I hear she likes to hang out in there when she’s missing Prince Phillip.

They also entertained the lessor royal children, regaling them with stories about what might happen to them if they ever talk about them to the press.

“Shhh, now. Don’t say a word unless you want to get locked in the Mummy Room overnight!”

They also “beamed” at the crowds from their car:

Prince Harry and Meghan roll down car window and beam at crowds as they are reunited with royal family https://t.co/45qs0OtVTv

Sadly, it’s all downhill from here. Wait, I take that back. Maybe things are looking up after all.

Prince Andrew has tested positive for Covid and will miss Jubilee thanksgiving service on Friday https://t.co/82Lxn50Szz

Here are some more shots from the 2022 Platinum Jubilee Trooping the Colours. Tags: A Royal Spectacle, Duchess Camilla, Duchess Kate, Meghan Markle, Prince Andrew, Prince Charles, Prince Charlotte, Prince George, Prince Harry, Prince Louis, Prince William, THE QUEEN, Trooping the Colours
SHARE
Our commenting rules: Don't be racist or bigoted, or post comments like "Who cares?", or have multiple accounts, or repost a comment that was deleted by a mod, or post NSFW pics/videos/GIFs, or go off topic when not in an Open Post, or post paparazzi/event/red carpet pics from photo agencies due to copyright infringement issues. Also, promoting adblockers, your website, or your forum is not allowed. Breaking a rule may result in your Disqus account getting permanently or temporarily banned. New commenters must go through a period of pre-moderation. And some posts may be pre-moderated so it could take a minute for your comment to appear if it's approved. If you have a question or an issue with comments, email: [email protected]
src="https://c.statcounter.com/922697/0/f674ac4a/1/"
alt="drupal analytics" >