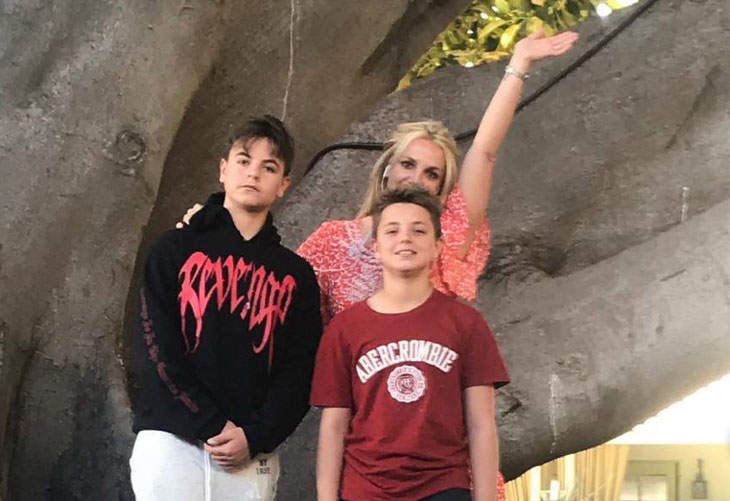 Somebody please pull Kevin Federline out of the backyard shed he turned into a recording studio, and tell him to stop recording PopoZão II: PopoZãoier, because nobody wants that and what we do want is for him to pull his 13-year-old son Jayden Federline (in front of Brit) off of Instagram Live!

To be honest, I’m not even sure this IG Live video is of Jayden. Shit, I’m not even sure it’s of an actual 13 year old, because I thought all 13 years olds thought IG was for the olds and did their Q&As on TikTok while doing that Doja Cat Say So dance. But everyone says that Britney Spears’ 13-year-old Cheetoling let loose on IG Live, saying that his grandpa, Daddy Spears, can die, his mom shouldn’t quit music since she makes a ton of money from it, and that KFed is Jesus. Why do I have a feeling that KFed was off to the side, threatening to blast PopoZão unless Jayden calls him Jesus? I mean, it’s something he might be able to use if he ever tries to become Brit’s new conservator.

In case you’re not up to date on the sad and messy current state of the Saga of Brit Brit, in September 2019, KFed took out a restraining order against Brit’s dad Daddy Spears after Daddy Spears got into a verbal fight with her 14-year-old son Sean Preston, which allegedly led to him breaking down a door and shaking the child violently. Brit was reportedly upset with her dad for jeopardizing her relationship with her sons. Daddy Spears was never charged, but he later stepped down as Brit’s conservator and a temporary new conservator was put in place (although, it’s been reported that Daddy Spears controls her money while the new conservator is in charge of Britney: The Person). There was also talk that Brit wanted to end the conservatorship altogether and that she and her mother Lynne Spears were trying to push Daddy Spears out. Nothing ever came of that, and the conservatorship, which Brit has been under since 2008, is still in place. Last month, a judge extended her conservatorship until April 30, 2020. That takes us to last night when Jayden spilled out his 13-year-old thoughts on his pepaw and his mom’s career.

JFed did a little Q&A on Instagram Live with his followers and Brit’s fans. Jayden said that Britney, who currently has 30% custody of her sons, wants to quit music and that his pepaw can die. Jayden should expect a visit from Hilary Duff who will school him on using “gay” as an insult. Here’s a piece of last night’s Cheetolings Town Hall:

Q: Is your mom releasing new music soon? Have you heard it?

A: Actually, I haven’t seen her doing new music at all. I don’t know, dude. Actually, I don’t even know. I remember one time I asked her, ‘Mom, what happened to your music?’ And she was like, ‘I don’t know, honey, I think I might just quit it.’ And I’m like, WHAT, what are you saying? Do you know how much bank you make off of that stuff?

Q: Is your grandpa a jerk?

Q: Are you going to visit your mom Britney?

A: Um, I’m going to visit her in like a couple of weeks. Cause I’m with my dad right now.

Q: Will you get in trouble for doing this?

A: No. I mean, my dad doesn’t care. I have the best dad ever. My dad’s literally Jesus.

The entire Q&A is fuel for the #FreeBritney fire, and when Jayden was asked about his feelings on the #FreeBritney movement, he said he doesn’t know how he feels about that. He promised that he’ll spill more about his mom’s conservatorship when he reaches 5,000 followers. But that’s probably not going to happen since his Instagram was wiped clean including all of the videos.

So to recap: A 13-year-old boy went on IG Live and a bunch of growns asked him questions about his mom’s life and he promised to tell more about his mom’s legal situation if he gets more followers. This is the darkest Black Mirror episode I’ve ever seen. Jesus, take the wheel! And no, not you K-Jesus. The other Jesus.

Tags: Britney Spears, Cheetolings, Kevin Federline, MESS
SHARE
Our commenting rules: Don't be racist or bigoted, or get into long-ass fights, or go way off topic when not in an Open Post. Also, promoting adblockers is not allowed. And some comment threads will be pre-moderated, so it may take a second for your comment to show up if it's approved.
src="https://c.statcounter.com/922697/0/f674ac4a/1/"
alt="drupal analytics" >