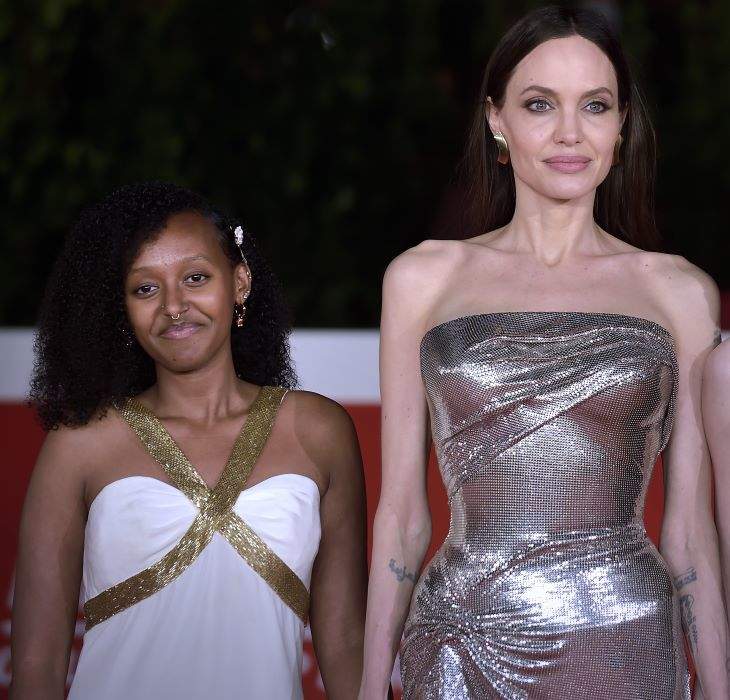 It seems like just yesterday that we watched a toddler Zahara Jolie-Pitt often grace the paps with a masterful, cutting side-eye (seen here) while out and about with her Hollywood elite parents–mom, Angelina Jolie, and dad, Brad Pitt, and her child army of siblings (Maddox, Pax, Shiloh, Vivienne, and Knox Jolie-Pitt). But we blinked, time flew by, and now she’s headed off to college this fall. Angelina took to Instagram to share that Zahara will be attending Spelman College, an HBCU. Around the same time, a TikTok of Angelina attempting to participate in the “Electric Slide” at a Morehouse & Spelman alumni event in LA was posted. Her electric sliding went about as well as you’d expect a white lady’s dancing at an HBCU event to go–not well. Now that Zahara’s side-eye is full grown and I’m sure she cut Angie with it while watching that mess, someone should probably assess her pulse since if anyone’s looks could kill–Zahara’s could–and it might have been low to begin with judging from those lethargic body movements.

And according to HuffPo, Angelina’s “dancing” was posted on TikTok by @watchtheyard, whose bio says that they’re “the center of Black college culture + Black fraternity & sorority news/culture.”

After Jolie’s announcement, a video simultaneously posted on TikTok showing the actor attending a Spelman event with her teenage daughter.

In the clip, which has already garnered more than 125,000 views, the actor showcases her dance moves as she attempts to join in on the electric slide during an event at the acclaimed college.

Jolie can be seen blushing as she other dancers before getting some supportive high-fives for her effort.

Those “supportive high fives” for her “effort” were probably just code for “please donate lots of money and we’ll name a lecture hall after you.” Here’s Angelina making Zahara most likely second-guess her decision to invite her to the event:

You know, I would usually rip on someone for even trying it, but the fact that she gave it a shot and is clearly embarrassed by her failure can be a reassuring lesson for all of us: you can be Angelina Jolie and still not be cool enough if you’re in a room full of people who all know the same least-impressively choreographed line-dance of all time; we should all stop trying so hard. Be complacent. Take a seat. Do the absolute least. Actually, not sure where Brad is, but maybe he’s the real expert in this lesson since the “least” here is not even showing up. Well-played, sir.

Tags: Angelina Jolie, Brad Pitt, Child Army, The Chosen Ones, TikTok, Your Mama Don't Dance, Zahara
SHARE
Our commenting rules: Don't be racist or bigoted, or post comments like "Who cares?", or have multiple accounts, or repost a comment that was deleted by a mod, or post NSFW pics/videos/GIFs, or go off topic when not in an Open Post, or post paparazzi/event/red carpet pics from photo agencies due to copyright infringement issues. Also, promoting adblockers, your website, or your forum is not allowed. Breaking a rule may result in your Disqus account getting permanently or temporarily banned. New commenters must go through a period of pre-moderation. And some posts may be pre-moderated so it could take a minute for your comment to appear if it's approved. If you have a question or an issue with comments, email: [email protected]
src="https://c.statcounter.com/922697/0/f674ac4a/1/"
alt="drupal analytics" >