Jay Cutler And Tomi Lahren Might Be A Thing, But She’s Denying It 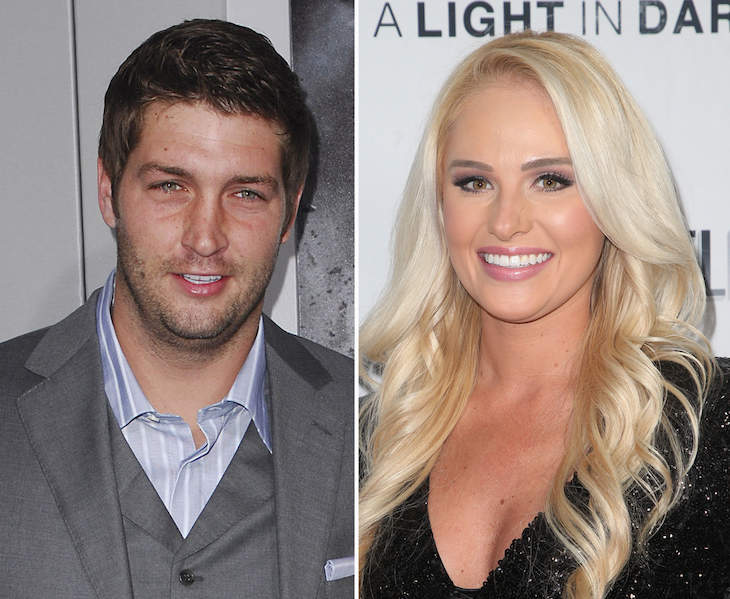 It’s been just over four months since Kristin Cavallari filed for divorce from her former football player husband of nearly 7 years, Jay Cutler. A split that became 100% messy, thanks to rumors of cheating and alleged laziness and withholding money out of spite. Well, if being in close proximity of a person is a sign that they’re dating, then it would look like Jay has decided to keep all that messy energy at a maximum by possibly dating right-wing sweetheart Tomi Lahren.

E! News says that 37-year-old Jay and 28-year-old Tomi were seen together, along with friends, at a bar in Nashville on Friday. Both Jay and Tomi live in Nashville, so this could just be a case of two famous people that happen to be friends, getting a drink on a Friday night. Except E!’s source believes that they were definitely there in a dating kind of way.

“The two of them were having a lot of fun together at a table along with two other friends,” the source shares. “Tomi and Jay were passing a bottle of tequila back and forth and taking shots together directly from the bottle. The two of them left together.”

So it sounds like they could be a thing. Even Twitter thinks so. And as such, Twitter has been having a field day (no pun intended). Jokes about Jay’s shitty passing and lazy quarterback work, to jokes about Tomi being a member of Team Trump.

Jay Cutler and Tomi Lahren are dating.
She can rest easily that, if he tries to make a pass at another woman, it won’t get there.
Geez, I crack myself up.

But, all those jokes might be for nothing. Because another source who spoke to E! News says that Jay and Tomi are just friends. Barstool Sports also claims to have an inside source that says they’re not together.

Per my high level sources. Jay Cutler is currently not dating anyone. Carry on with your day #BackInTheCircleOfTrust

And Tomi herself has personally come forward to accuse the internet of making up rumors about her personal life.

I love it when the internet tells me who I’m dating. Good one.

So there you have it, but I can’t help but point out the timing of all of this. Kristin announced that she was done with Jay on April 26th. She filed for divorce, citing “marital misconduct.” On April 29th, Tomi confirmed to People magazine that she had called off her engagement to Brandon Fricke (she had last been pictured wearing her engagement ring on social media in January). Two weeks before she announced she was done with Brandon, it was reported that she had just bought a home in Nashville.

And now, Tomi Lahren is reportedly sharing swigs of tequila with Jay Cutler. And that might honestly be the most questionable thing about this alleged situation. Normally the mention that they left together would be enough to make me go, “Oh yeah, they’re doing it.” But since we’re still in the middle of a global health pandemic, it’s the mention that they were drinking out of the same bottle. You’ve got to be either extremely close, or excessively drunk, to want to toss liquid germs back and forth with someone during COVID. Then again, Jay isn’t exactly the Department of Health’s poster boy when it comes to quarantine rules.

Tags: Jay Cutler, Kristin Cavallariwhatever, New Couple Alert, Tomi Lahren
SHARE
Our commenting rules: Don't be racist or bigoted, or get into long-ass fights, or go way off topic when not in an Open Post. Also, promoting adblockers is not allowed. And some comment threads will be pre-moderated, so it may take a second for your comment to show up if it's approved.
src="https://c.statcounter.com/922697/0/f674ac4a/1/"
alt="drupal analytics" >