The Internet Is Turning On Taylor Swift (Or Something Like That) When we last left the drama going down in the quad at Famous Millionaire High, Calvin Harris sharted up a whine stream on Twitter after the story came out that Taylor Swift wrote the lyrics to “This Is What You Came For.” Taylor’s people also let us know through TMZ that she came up with the melody too, thankyouverymuch.

Katy Perry brought Hillary Clinton into it by responding with this GIF:

And then Katy re-tweeted a shady tweet that she tweeted around the time that Taylor burped up the video for “Bad Blood” (aka Taylor’s anti-Katy Perry anthem):

Meanwhile, the children on Twitter got the hashtag #TaylorSwiftIsOverParty to trend, and the children on Instagram trolled Taylor’s page by filling the comments with snake emojis. 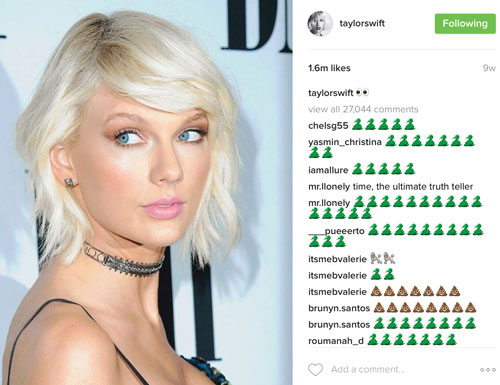 Taylor hasn’t said anything about any of this yet. I’m sure that as soon as she has an intimate dinner with Tom Hiddleston, her lawyers and an NDA for his ass to sign, she’ll deploy herself and her PR team to the situation room in her  Rhode Island mansion where they’ll work for hours on a damage control plan. I’m sure that damage control plan will include Tom and Taylor getting married and adopting two blind orphans during their honeymoon. And yes, Taylor will name her new orphan children “Katy” and “Calvin” to show us that she has a golden heart made of forgiveness. Tags: Calvin Harris, Katy Perry, Taylor Swift, The Drama Of It All, Tom Hiddleston
SHARE
Our commenting rules are pretty simple: Don't be racist or bigoted, or go way off topic when not in an Open Post. If you see an offensive or spammy comment you think should be deleted, flag it for the mods and they'll be forever grateful and give you their first born (although, you probably don't want that).
src="https://c.statcounter.com/922697/0/f674ac4a/1/"
alt="drupal analytics" >