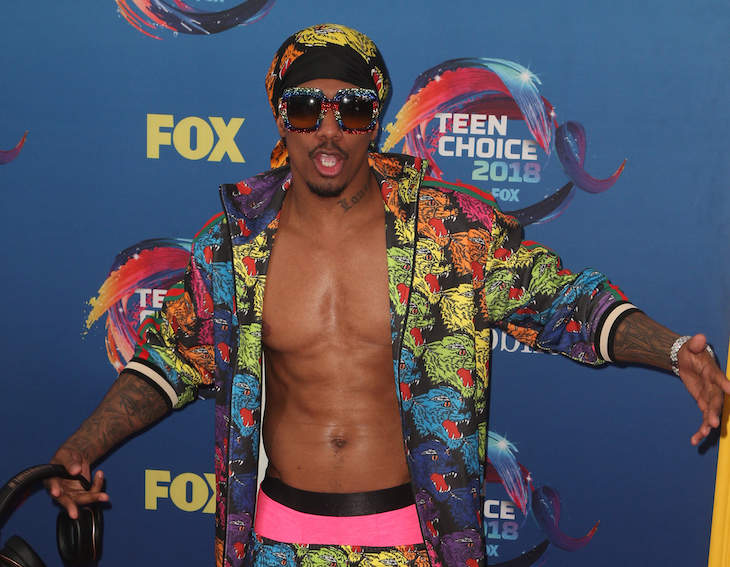 It’s entirely appropriate that Nick Cannon created a show called Wild n’ Out because that’s also how you could explain what his penis has been doing over the past year or so. Just absolutely going wild and popping off, fertilizing every vagina possible. Less than a month after it was confirmed that Abby De La Rosa was pregnant with Nick’s second set of twins, we learned that he had allegedly gotten another woman pregnant, a former Wild n’ Out model named Alyssa Scott. Nick’s appearance in a recent maternity shoot posted to Instagram has confirmed the rumors that he’s expecting his seventh child. Nick better stock up on Sharpies now, because at the rate he’s going, he’s bound to run out of ink every time he attempts to draw his family tree.

This news comes four days after we learned that 40-year-old Nick Cannon had welcomed his fifth and sixth child into this world, twin boys that were named Zion Mixolydian Cannon and Zillion Heir Cannon. Zillion Heir better not expect to be a zillionaire when it comes time to open his trust fund, because all of Nick’s kids just got downgraded to a lower cut of The Masked Singer residuals. On Father’s Day (or as Nick probably calls it, The Day of So Many Phone Calls), Alyssa posted a picture of herself and Nick, with his hands holding her big baby belly. Also, according to Alyssa, she’s due any day now. via People magazine:

While Cannon’s face cannot be seen completely in the image, the man’s tattoos are noticeably consistent. He appeared shirtless in the maternity photo with Scott, holding her baby bump.

“Celebrating you today,” she wrote to Cannon, posting the photo on her Instagram Story.

She noted in the comments that she was 34 weeks along in her pregnancy. In another post from last week, she said she was in “the final days” of her pregnancy with what will be her second child.

Congrats to Nick Cannon who is welcoming his 7th child with former ‘Wildin’ Out’ model Alyssa Scott 💕 pic.twitter.com/B9cY6SZlOA

Alyssa has since deleted her original pregnancy announcement that she made on Instagram back in May (the one in which she claimed she was pregnant with Nick’s son, and that she planned to name him Zen S. Cannon). Nick Cannon has yet to speak about his seventh child on social media. Nick hasn’t said why he’s so committed to getting women pregnant. But, Nick has gotten pseudo-religious over the past few years, so seeing him spread his seed like a Duggar has my fundamentalist warning sign radar pinging a little too hard. Especially since Nick is definitely rich enough to afford at least one box of condoms. Nick’s current set of kids includes:

Why do I get the feeling that on the same day Alyssa posts a maternity ward selfie with her new bundle of joy, another woman will be using the same social media platform to break the exciting news that she’s pregnant with Nick’s next child. The odds of it are really good! People magazine probably has a post titled “Nick Cannon expecting 8th child” in their drafts, just to save time.

Tags: BABIES!!!, Here We Go Again, Nick Cannon
SHARE
Our commenting rules: Don't be racist or bigoted, or post comments like "Who cares?", or have multiple accounts, or repost a comment that was deleted by a mod, or post NSFW pics/videos/GIFs, or go off topic when not in an Open Post, or post paparazzi/event/red carpet pics from photo agencies due to copyright infringement issues. Also, promoting adblockers, your website, or your forum is not allowed. Breaking a rule may result in your Disqus account getting permanently or temporarily banned. New commenters must go through a period of pre-moderation. And some posts may be pre-moderated so it could take a minute for your comment to appear if it's approved. If you have a question or an issue with comments, email: [email protected]
src="https://c.statcounter.com/922697/0/f674ac4a/1/"
alt="drupal analytics" >