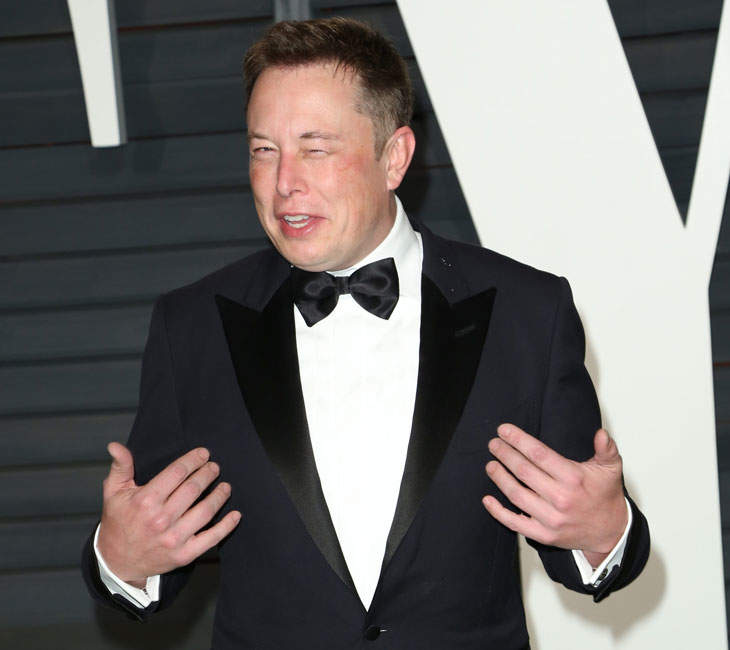 This is also good news for doctor’s office nurses and teachers whose brains will throb with confusion while trying to say the name X Æ A-12 Musk before throwing up their hands and going, “Fuck it, I’m going to lunch early, I don’t need this!” Although, little Aeon Flux A24 Musk will probably never see the inside of a doctor’s office since his ills will be treated with moon water-dipped crystals applied to his body by a cyborg drone in a nurse’s hat. And he’ll never see the inside of a classroom since he’ll get his schooling from an Elon Musk hologram that will just repeat his tweets on a loop.

But the news here is that Elon Musk and Grimes will have to choose a new name that’ll let their newborn baby know that they already hate him. Because if they wrote X Æ A-12 down on their baby’s birth certificate, a California state official will throw the same “did I eat a ton of acid for lunch or is that name for real” look that Elon is throwing in the picture above before stamping DENIED on that shit.

As Mieka posted about yesterday, Grimes confirmed that they really did name their newborn X Æ A-12 and explained that they chose the name because X is the unknown variable, Æ is the elven spelling of AI, A-12 is the precursor to their favorite aircraft, and A is also for Archangel (the name of Grimes’ favorite song by the musician Burial). And because Elon is Elon, he publicly called out Grimes for a mistake she made in her description and she let him know that she just gave birth, dammit. Basically, their love is heartwarming and will live on forever.

CNN says that they’ll have to come up with another name because California state law does not allow some Scientology captcha ass shit:

Names can only use the 26 alphabetical characters of the English language, according to the state constitution.

Not only does this spell trouble for X Æ A-12 Musk, it also means bans on diacritical marks, such as accents in names like “José.”

I did not know this. Excuse me while I cross, “Legally change my name to Concepción 69” off of my bucket list.

So I guess Elon and Grimes will have to think of other things they love that they can name their child after. They should keep it simple this time and name him after what they love the most by naming him Attention Musk. But knowing them, they’ll give him an even worse name. They’ll name him A (after Archangel) and Null (since it’s an unknown value). A Null Musk! I need to stop giving them horrific ideas. Someone needs to call CPS on me for that.

Tags: Baby Names, CPS Is On Line One, Elon Musk, Grimes
SHARE
Our commenting rules: Don't be racist or bigoted, or get into long-ass fights, or go way off topic when not in an Open Post. Also, promoting adblockers is not allowed. And some comment threads will be pre-moderated, so it may take a second for your comment to show up if it's approved.
src="https://c.statcounter.com/922697/0/f674ac4a/1/"
alt="drupal analytics" >