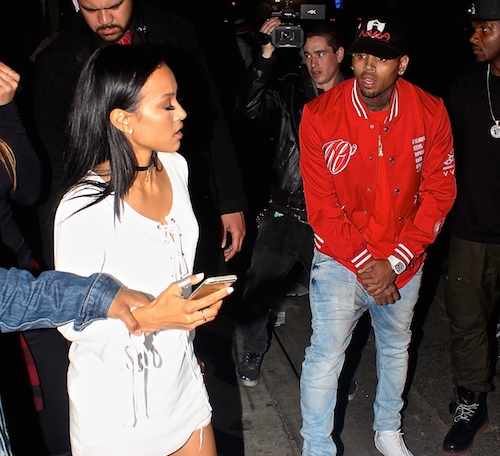 According to TMZ, Chris Brown spent most of last night proving he’s still as awful as ever by getting into a loud screaming match with his ex-girlfriend Karrueche Tran outside her house at 3am. Yeah, someone should inform Chris Brown that that’s not typically how you win someone back.

The tragic tale of unrequited douche love began last night when Chris Brown decided to show up to a club he knew Karreuche would be at in his new Lamborghini. He then got a VIP table next to hers, something she wasn’t having, so she decided to leave. That’s when Chris Brown decided to follow her and her friends outside and get into their car, abandoning his Lamborghini. “Uh…he only pulls that shit with cars, right?” thought the mother of Chris Brown’s baby. You can see Chris sort of push his way in and hear someone tell him to “Get out of the car” around the 0:54 mark below.

Sadly, he didn’t get very far; “sources” say Karrueche was pissed off at him and dumped his ass at a friend’s house on the way home. Then around 3:30am, Karrueche had a Say Anything moment when she heard some noise outside her house and saw Chris Brown standing there. Except instead of holding a boombox playing “In Your Eyes“, he was screaming like a raged-up maniac and slamming his fists against her door.

Karrueche wouldn’t let Chris Brown inside, and eventually the police showed up. But they didn’t charge Chris Brown with anything, because he hadn’t really committed a crime. Once they left, Karrueche agreed to meet Chris at a diner so they could talk. Naturally, the screaming kept on going at the diner, so Karrueche left and went home.

There’s so much of this story that is a damn MESS, but the messiest part to me is what happened in the diner. Chris did that diner dirty. A 24-hour diner is a place for stuffing as many eggs and toasts and syrup-soaked pancakes into your mouth as possible in an attempt to prevent the next-level hangover you’re going to get the next day, not for screaming at your ex. RUDE!

Here’s Chris following Karrueche out of the club last night. I will say this: I am feeling Karrueche’s Guns N’ Roses out-of-town groupie couture. Tags: Chris Brown, Karrueche Tran, MESS, The Drama Of It All, You Would
SHARE
Our commenting rules: Don't be racist or bigoted, or post comments like "Who cares?", or have multiple accounts, or repost a comment that was deleted by a mod, or post NSFW pics/videos/GIFs, or go off topic when not in an Open Post, or post paparazzi/event/red carpet pics from photo agencies due to copyright infringement issues. Also, promoting adblockers, your website, or your forum is not allowed. Breaking a rule may result in your Disqus account getting permanently or temporarily banned. New commenters must go through a period of pre-moderation. And some posts may be pre-moderated so it could take a minute for your comment to appear if it's approved. If you have a question or an issue with comments, email: [email protected]
src="https://c.statcounter.com/922697/0/f674ac4a/1/"
alt="drupal analytics" >