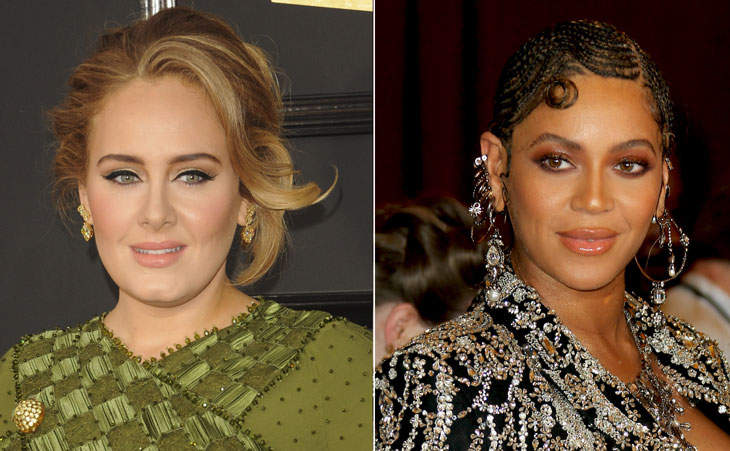 One way to drum up interest in your new album is to hint at a collaboration with Jesus. We’ll see how far that gets Kanye, but another way to do it is to claim you’re collaborating with The Queen (Bey). And if you really want to get people to Google “What is One Republic”, you claim that Adele and Beyoncé are both going to be on the same track. You can leave out the whole part about Gwyneth Paltrow’s brother Chris Martin laying down a piano riff on it, even if that turns out to be the only part that’s actually true.

According to Fader, while speaking backstage at a concert this past weekend, Ryan Tedder of One Republic announced that Bey, Adele, and Chris had all collaborated on a track for their upcoming album. Given what we know about Adele’s status as the branch manager of the Bey Hive of Greater Great Britain, this was huge news. I honestly felt weird having never heard of this band before because they must have some serious juice to pull off a collaboration of that caliber. Turns out they don’t.

Despite explicitly saying “[OneRepublic] have one song featuring Beyoncé and Adele, with a Chris Martin piano solo on the bridge”, setting both the Beyhive and the Daydreamers (that’s the collective noun for Adele fans, per Pop Buzz) into a tizzy, Pop Crave reports Ryan was only “joking”. Here’s Ryan hitting the Bey Hive with a stick.

Unsurprisingly, this news took off like a swarm of angry bees, getting picked up as fact by a number of legitimate news sources.

"Rumor Has It" that Adele and Beyoncé are teaming up!https://t.co/iy9DNUzxqM

It's actually happening: Beyoncé and Adele have collaborated on an upcoming song 🤯 https://t.co/J9IqmJs8CK #Beyonce #Adele pic.twitter.com/h3czdqK9w5

But it was too good to be true. Here’s Ryan, face and ass all swollen with apitoxin, trying to take it all back once he realized there are 2 things you just don’t joke about; one of which is The Holocaust.

Ryan Tedder of One Republic clarifies that there will *not* be a collaboration with Adele, Beyonce and Chris Martin on the group’s new album: pic.twitter.com/AAZ2M3fOk6

This dum dum really thought The Hive and the Daydreamers would have sufficient chill to hear their queens’ names in the same sentence and not get in formation immediately, instead of first checking the batteries in their sarcasm meters?

So he really played us like this, it's on sight now pic.twitter.com/u8nleMonjS

Good thing for Ryan he may have some earned immunity from the wrath of the Beyhive (and whatever punishment the Daydreamers dole out, they probably fill your comments with sleeping guy emojis). According to Rolling Stone, Ryan wrote Halo for Beyoncé and Rumor Has It for Adele. So his joke makes a little more sense in that context. All the same, I think it best if Ryan sleep with one eye open from now on. I heard the Coldplay stans do not fuck around. If Ryan doesn’t watch his back, One Republic’s new album is going to get a mediocre review on Goop!

Tags: Adele, Beyonce, One Republic, Rumor Has It, Ryan Tedder
SHARE
Our commenting rules: Don't be racist or bigoted, or post comments like "Who cares?", or have multiple accounts, or repost a comment that was deleted by a mod, or post NSFW pics/videos/GIFs, or go off topic when not in an Open Post, or post paparazzi/event/red carpet pics from photo agencies due to copyright infringement issues. Also, promoting adblockers, your website, or your forum is not allowed. Breaking a rule may result in your Disqus account getting permanently or temporarily banned. New commenters must go through a period of pre-moderation. And some posts may be pre-moderated so it could take a minute for your comment to appear if it's approved. If you have a question or an issue with comments, email: [email protected]
src="https://c.statcounter.com/922697/0/f674ac4a/1/"
alt="drupal analytics" >