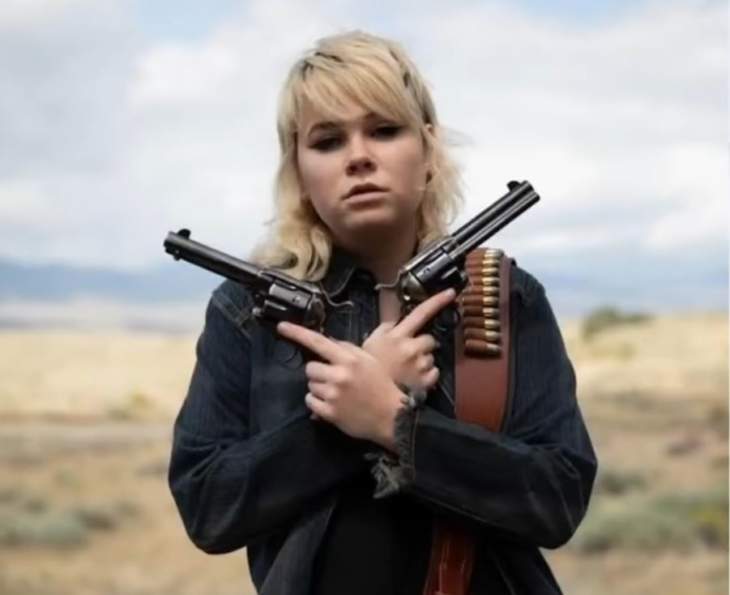 Hard to imagine things being any messier and more dramatic than they already were but Rust armorer Hannah Gutierrez-Reed’s lawyer appeared on Today this morning screaming SABOTAGE. And Alec Baldwin has posted a 7-part screed on Instagram denying that things were messy and dramatic on set. As we know, Alec accidentally shot and killed Rust cinematographer Halyna Hutchins and injured director Joel Souza using a gun that was handed to him by assistant director Dave Halls, who reportedly told him that the gun was “cold,” meaning it contained no live rounds. But the Santa Fe County Sheriff’s Department collected 500 rounds of ammunition from the set and determined that they included “a mix of blanks, dummy rounds and, possibly, live rounds.” Hannah’s lawyer previously stated that Hannah “had no idea” where the live rounds came from and on Today suggested that a “disgruntled” crew member might have introduced a live round to the box of ammunition from which Hannah loaded the gun Halnya was killed with.

Jason Bowles, Hannah’s attorney, is wasting no time digging into the alleged on-set turmoil that found the Rust camera crew walking off in protest to long hours and unsafe working conditions the very day Halyna was killed. Hannah’s team initially pointed their fingers at production, which includes Alec himself, but now they’re pivoting to sabotage by way of production. According to The New York Post:

Hannah Gutierrez-Reed, 24, loaded the gun Baldwin used on the set of “Rust” from a box of ammo that should have been only dummy rounds, her attorney, Jason Bowles, told the “Today” show.

“We know there was a live round in a box of dummy rounds that shouldn’t have been there — at least one live round,” said Bowles, a former federal prosecutor.

“I believe that somebody who would do that would want to sabotage the set, want to prove a point, want to say that they’re disgruntled, they’re unhappy.

Jason identified “a time frame between 11 a.m. and 1 p.m… in which the firearms at times were unattended” and went on to reiterate how Hannah was working two jobs on the set that day, as armorer and as “key prop assistant,” and therefore “wasn’t able to keep an eye on the firearms,” giving the phantom saboteur time to… what exactly? Exact their revenge by introducing a zero-sum chance someone might die? This scenario is as convoluted as Hilaria Baldwin’s explanation for how she is Spanish. As for Alec, between posing for Halloween pictures with the family on Instagram and conducting ad hoc roadside press conferences, he’s taken some time to collate a TL:DR Facebook message from Rust’s costume designer Terese Magpale Davis in which she calls the camera crew that walked off the set “not heroes” and “jerks.” According to Deadline:

Having already this past weekend called the Rust production “well-oiled” despite weapons discharges and crew resignations before the October 21 fatal shooting of cinematographer Halyna Hutchins, Alec Baldwin is now advocating that claims of “unsafe, chaotic conditions are bullshit.”

the Rust star and producer on Tuesday reposted on Instagram costume designer Terese Magpale Davis’ lengthy October 30 Facebook defense of the making of the indie Western.

Attacking the camera crew members who resigned over safety and financial issues mere hours before the supposed “cold gun” shot Hutchins and Souza as “not heroes” and “jerks,” Davis lathers up Rust’s producers as “some of the most approachable and warm I have ever worked with.”

Approachable and warm, that’s our Alec! Here is 1 of the 7 individual posts on Instagram that Alec shared.

This has obviously been a hard time for everyone involved but it’s been especially hard for Hilaria because as she says in a post about their lost cat, “the paparazzi and tabloid media are calling every single connection to us, and I don’t want you to be harassed too, in their frenzy to make more money. As I write this, there are people, taking my picture, through the trees of the property we are staying at. They have not respected our ask to have space, even after the interview we pulled over to do the other day. We have been chased around in cars—with our children. Several scary moments…this is dangerous. Please listen.” In case you didn’t know, killing somebody, even accidentally, is a major inconvenience! In better news though, the cat came back the very next day.

Tags: Alec Baldwin, Halyna Hutchins, Hannah Gutierrez-Reed, Hilaria Baldwin, Rust, Tragedies
SHARE
Our commenting rules: Don't be racist or bigoted, or post comments like "Who cares?", or have multiple accounts, or repost a comment that was deleted by a mod, or post NSFW pics/videos/GIFs, or go off topic when not in an Open Post, or post paparazzi/event/red carpet pics from photo agencies due to copyright infringement issues. Also, promoting adblockers, your website, or your forum is not allowed. Breaking a rule may result in your Disqus account getting permanently or temporarily banned. New commenters must go through a period of pre-moderation. And some posts may be pre-moderated so it could take a minute for your comment to appear if it's approved. If you have a question or an issue with comments, email: [email protected]
src="https://c.statcounter.com/922697/0/f674ac4a/1/"
alt="drupal analytics" >