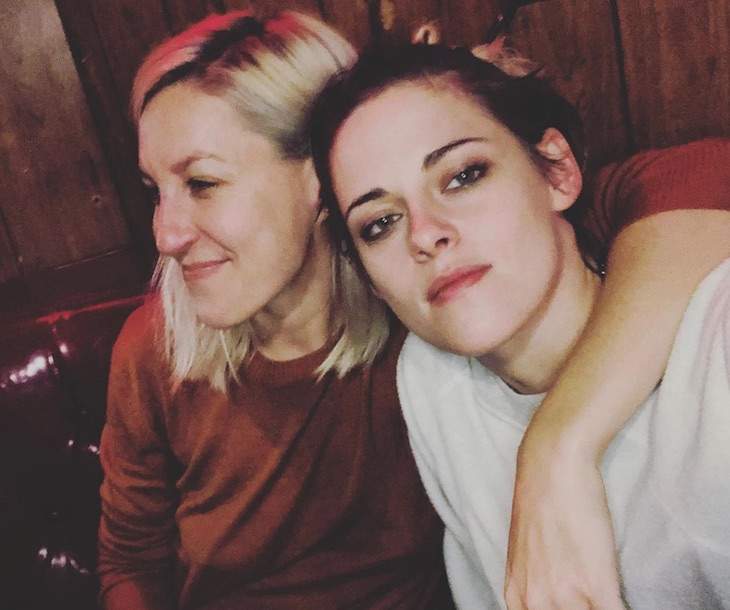 Almost exactly two years ago, Kristen Stewart told Howard Stern that she couldn’t “fucking wait” to marry her girlfriend, Dylan Meyer. Well, it looks like Kristen Stewart can officially retire her How Long Do I Have To Fucking Wait countdown clock because she recently returned to Howard Stern’s SiriusXM show and announced that she and Dylan are going to get married. It’s only Tuesday, and it’s already shaping up to be a great week for engaygements (to the LGBTQ+ community, I am so sorry for turning that word into such a terrible pun).

31-year-old Kristen started dating screenwiter Dylan (some outlets say she’s 33) in 2019, a little while after breaking things off with model Stella Maxwell, and then Sara Dinkin, who she dated for a minute. As for how the proposal went down, Dylan dropped down onto one knee, presented Kristen with her mother’s ring, and while staring at her with creepy CGI’d orange eyes, promised to love her for every moment forever, while asking her to do her the extraordinary honor of marrying her. Wait no, that’s the proposal scene from Twilight. The details of how it actually happened are something Kristen chose to keep private, but she did reveal that she was the one who was proposed to. via People magazine:

“We’re marrying, we’re totally gonna do it,” Stewart told host Howard Stern. “I wanted to be proposed to, so I think I very distinctly carved out what I wanted and she nailed it. It was really cute, she did very well. We’re marrying, it’s happening.”

Discussing Meyer’s proposal, the Twilight star said, “I wasn’t specific at all. It’s not a given that I would be the one. You know what I mean? With two girls, you never know like who’s going to fulfill what weird fucking gender role thing. We don’t do that or think about it in those terms. She just grabbed that bowl and made it happen. It was fucking so cute.”

Grabbed that bowl? I’m not familiar with that term. Is it a term? Maybe Kristen means Dylan literally grabbed a bowl. Did she hide the ring in a bowl of guacamole? Awwwww.

Dylan hasn’t confirmed the news that was dropped by her soon-to-be wife, but a week ago she did Instagram this picture of the two of them relaxing on the floor like two cats who got kicked off the couch.

It’s also not known when they’ll get married. Ah, the classic conundrum: Which will come first, the marriage or the Oscar nomination? But one thing is for sure, and that’s that on the day they do get married, Kristen Stewart will be wearing something designed by Chanel. Dylan is marrying Kristen, but Chanel comes too. Chanel is always there. I hope Dylan looks good in off-white tweed bouclé, tulle, and pearls because there’s about to be a whole lot of it in her future.

Tags: Dylan Meyer, Engaged, Engagements, Kristen Stewart
SHARE
Our commenting rules: Don't be racist or bigoted, or post comments like "Who cares?", or have multiple accounts, or repost a comment that was deleted by a mod, or post NSFW pics/videos/GIFs, or go off topic when not in an Open Post, or post paparazzi/event/red carpet pics from photo agencies due to copyright infringement issues. Also, promoting adblockers, your website, or your forum is not allowed. Breaking a rule may result in your Disqus account getting permanently or temporarily banned. New commenters must go through a period of pre-moderation. And some posts may be pre-moderated so it could take a minute for your comment to appear if it's approved. If you have a question or an issue with comments, email: [email protected]
src="https://c.statcounter.com/922697/0/f674ac4a/1/"
alt="drupal analytics" >