Open Post: Hosted By The Robot Dogs Of Singapore 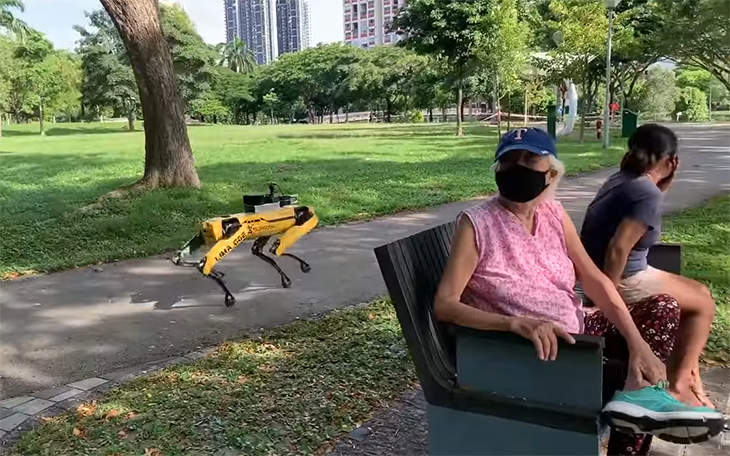 Well guys, it’s official. The end times are here. A disease is attacking the planet and forcing humanity into shelter and now, because we love to speed up our own destruction, there are robot dogs in Singapore that were supposedly created to help us with social distancing. The current state of this world really is a really long Black Mirror episode.

The Verge says that Singapore has turned to robotics to make sure people are social distancing. Boston Dynamics’ “Spot” robot has been deployed in Singapore’s Bishan-Ang Mo Kio Park for a two-week trial run. The robot broadcasts messages reminding people in the park to keep a safe distance. But don’t worry, Singapore’s National Parks Board (NParks) has promised the robots won’t collect personal data or use video surveillance to identify people. And when a group controlling a potentially harmful robot promises something, you should always believe them. Westworld, who?

The robot is controlled by remote, but has sensors to prevent collisions and will also be accompanied by a guide . Flyers have been posted reminding people not to fuck with the robot while it’s on duty:

Just received the most Singaporean pandemic content from a mate based in the little red dot pic.twitter.com/vqgnQ5F4D9

NParks said that the robot will help reduce the spread of coronavirus because it cuts down on the number of staff needed in the park. The board is also reportedly considering using the robots elsewhere in the city.

Well there you go. When you get tired of being stuck inside due to the pandemic, put on your mask and take a leisurely stroll through the park where a robot dog will shout out a prerecorded voice reminding you to keep your distance. Not at all creepy. Robot dogs being used to enforce order among humanity? I don’t see how this could go possibly wrong!

Tags: Black Mirror, Coronavirus, Quarantine
SHARE
Our commenting rules: Don't be racist or bigoted, or get into long-ass fights, or go way off topic when not in an Open Post. Also, promoting adblockers is not allowed. And some comment threads will be pre-moderated, so it may take a second for your comment to show up if it's approved.
src="https://c.statcounter.com/922697/0/f674ac4a/1/"
alt="drupal analytics" >