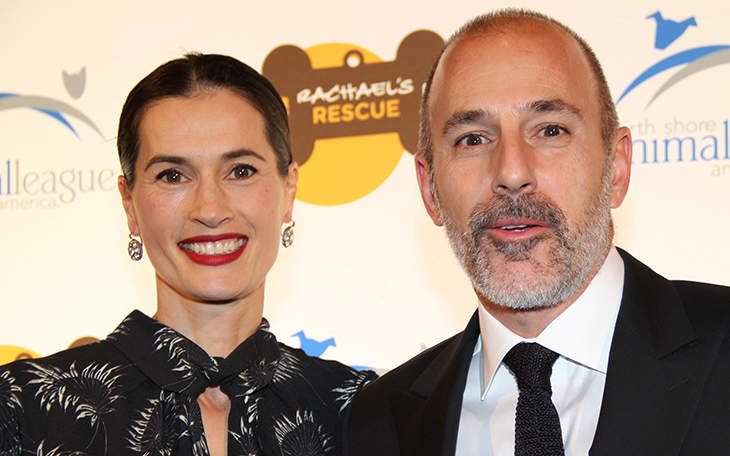 Matt Lauer and Annette Roque have officially, officially quit each other. After separating over a year ago, and battling it out behind closed doors over just how many zeroes he was gonna be putting on that check; the two have finally come to an arrangement, filed the papers, and a judge just signed them. According to the American Government, we now pronounce you ‘Ex-husband and wife‘. And all it cost Matt was a measly $20 million and a horse farm.

Well unless you also count the loss of his once-storied career, because… then it cost him a lot more. After Matt Lauer fell from grace harder than Paula Abdul off a stage and was fired for sexual harassment, Annette eventually left him. And their divorce fight got a little messy.

At first we heard reports of some squabbling–because a nasty divorce brought on by infidelity/perviness will definitely fray some emotions. Matt didn’t want to pay his wife half of his money, which was around $50 million.

Page Six says the divorce happened quietly between the two of them, which is a concept Angelina Jolie and Brad Pitt are like, “HUH?!”, about. And when they were ready, Annette officially filed for divorce and now a judge has just gone over the paperwork and signed it last Thursday. Here lies Matt Lauer and Annette Roque’s Marriage: 1998-2019. They share children: Jack, 17, Romy, 14, and Thijs, 11. Annette is apparently getting up to $20 million from Matt and will keep the horse farm in the Hamptons. The horse farm… in the Hamptons. If I divorced a guy it’s like: “Who gets the PS4?” Me–I’ll kill you for it.

Congrats Annette you had some fun times with Matt and had a bunch of kids and now it’s time to swing into your next phase of life. Join Wendy Williams in the Newly Single Established Woman category, because she seems to be living it up! But be aware that even though you and Matt are officially done, he will periodically send you notes on your life. But I guess it’s better than the other things he sends to people…

Tags: Annette Roque, Divorce, Matt Lauer
SHARE
Our commenting rules are pretty simple: Don't be racist or bigoted, or go way off topic when not in an Open Post. If you see an offensive or spammy comment you think should be deleted, flag it for the mods and they'll be forever grateful and give you their first born (although, you probably don't want that).
src="https://c.statcounter.com/922697/0/f674ac4a/1/"
alt="drupal analytics" >