Annette Roque Has Filed For Divorce From Matt Lauer 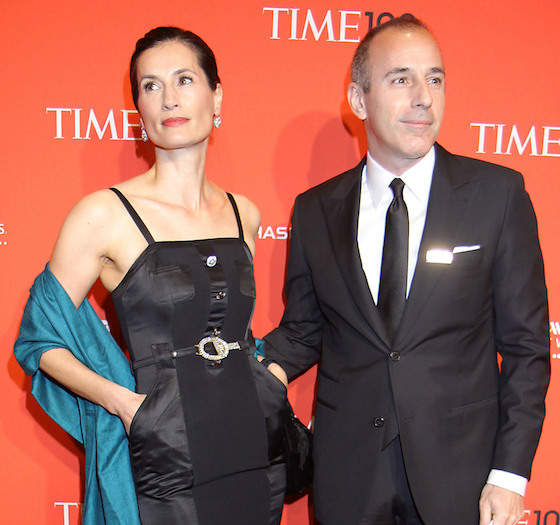 After Matt Lauer got canned from the Today show, his wife Annette Roque told him to get the hell out of their Hamptons home and started making million-dollar spousal support plans. That was last year and according to People, Annette just got around to filing for divorce.

Annette filed divorce papers on Tuesday in Suffolk County, New York. Lucien Chalfen, the director of public information for the New York State Unified Court System, confirmed that Annette filed for divorce, and it will probably a pretty quick process.

“The case, which is an uncontested matrimonial, was filed on July 9th in State Supreme Court in Suffolk County, New York and is awaiting judicial review of the agreement. Upon a judge’s signature, it will be sent to the court clerk’s office to be entered. The process could take up to a few months.”

According to Annette’s lawyer, who also spoke to People, it will most likely happen fast because the matter has been “settled.”

Annette and Matt were married in 1998 after meeting on a blind date. They split up in 2006 after Matt allegedly had an affair with NBC correspondent Natalie Morales, but he gave Annette $5 million and she stuck around. They had three children together: Jack (18), Romy (15), and Thijs (12). Annette and Matt have reportedly been working out the details of a settlement for about a year now. Annette reportedly wanted a one-time payout of $20 million and two family homes. Later it was reported that Annette wanted a $25 million one-time payout and $25 million in various properties and cash. Matt reportedly didn’t want to fork over that much of his net worth, and when we last checked in, it looked like Matt had allegedly agreed to to an amount in the neighborhood of $20 million, plus a portion of the sales of their multi-million dollar homes in Sag Harbor, the Upper East Side, and New Zealand.

It’s not known for sure how much Annette will actually walk away with. But it should be noted that Annette allegedly worked out a “post-nup” with Matt after his alleged cheating scandal back in 2006, that guaranteed Annette a whole wad of cash in the event Matt pulls some Matt-level shit again. Page Six says that Annette and Matt have agreed to share custody of their kids, and that Annette gets their Hamptons horse farm. Their $44 million Hamptons home is up for sale. I guess the only clue about whether or not Annette hit the divorce jackpot will be if she’s seen wearing a huge-ass smile this summer. Then again, that might just be what your face does when you realize you’re no longer married to Matt Lauer.

Tags: Annette Roque, Divorce, Matt Lauer
SHARE
Our commenting rules: Don't be racist or bigoted, or get into long-ass fights, or go way off topic when not in an Open Post. Also, promoting adblockers, your website, or your forum is not allowed. And some comment threads will be pre-moderated, so it may take a second for your comment to show up if it's approved.
src="https://c.statcounter.com/922697/0/f674ac4a/1/"
alt="drupal analytics" >