Programming Note: Brought To You By James Franco’s Barf-Colored Hair When James Franco Instagrammed a picture of his hair looking like four bottles of Sun-In pissed all over it, I figured it was for a movie since James Franco suffers for his art. But based on his look, I guessed he was playing a creeper junkie who is obsessed with Aaron Carter and is trying to become him. I was close! James is playing a real-life mess named Michael Glatze who was a gay activist in San Francisco, but later found Jesus and “prayed away” his love of hard dick and man ass. Here he is shooting that shit on Long Island yesterday. Yup, James’ look seems about right. But, that hair color better be for the “newly straight Michael Glatze,” because I don’t know any gay dude who would walk around outside with a hair color that looks like the color of your barf after you ate a tub of orange sherbet and pasta covered in vodka sauce. (Cut to me in the 90s walking around with a hair color like that because Sun-In did me wrong.)

Anyway, this will be my last post of the day. My partner in fuckery, Allison, will take over for the rest of the day and tomorrow. For a while now, I’ve been dealing with some acid reflux shit that just won’t go away. I’ve bitched about it on here a few times. It feels like an obese burping gerbil is stuck in my chest. I’ve taken everything and have tried everything. I knew it was serious when a few weeks ago, my doctor looked me in the eye and said, “Stop drinking coffee and alcohol.” He might as well have said to me, “Do you want euthanasia via injection or should I just let you slowly shrivel and die while thinking about a summer without booze?” I don’t even know how I’m still alive! So when being on a no booze, no coffee and no other fun things diet didn’t work, my doctor ordered THE SCOPE!

So this morning, my doctor will shove a tube down my throat and I can already hear you making a “Bitch, that’s probably the most action you’ve gotten in centuries” joke in your head, so I won’t do that. There will be no more posts from me today unless I manage to get to my laptop and drool out an incoherent post in a half-sedated state about some shit you don’t care about. You know, I think I just described my job description to a T. Goodnight! 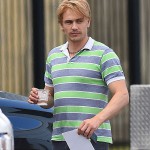 Tags: James Franco, Programming Note
SHARE
Our commenting rules: Don't be racist or bigoted, or get into long-ass fights, or go way off topic when not in an Open Post. Also, promoting adblockers is not allowed. And some comment threads will be pre-moderated, so it may take a second for your comment to show up if it's approved.
src="https://c.statcounter.com/922697/0/f674ac4a/1/"
alt="drupal analytics" >