The Greatest News In The Universe And Beyond: A Jem And The Holograms Movie Is Happening 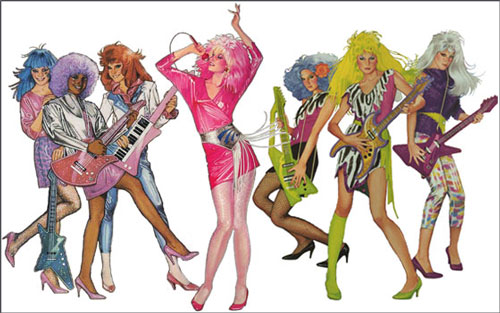 Fred Phelps is dead, there’s a Bea Arthur iPhone game, the world has been gifted with a boy pussy anthem and Hollywood is making a Jem and the Holograms movie! It’s not only the first day of Spring and International Day of Happiness, it’s also International Gay Day!

I don’t know how I’m typing this, because as soon as I read the headline, “Jon M. Chu is Directing a Jem and the Holograms Film,” I burst into a cloud of star-shaped pink glitter. The day every child of the 80s has been waiting for ever since Jem and the Holograms (and more importantly, my hot bitch idols The Misfits) disappeared off of our TV screens in 1988 has FINALLY arrived. In an announcement that is the video equivalent of God saying, “See, I answer your prayers sometimes,” director Jon M. Chu and producers Jason Blum and Scooter Braun say that they’re making a Jem movie and are asking fans for creative ideas. I hate Scooter Braun for helping to create the urethra plug known as Justin Bieber, but I hate him a little less today. Scooter Braun has somewhat atoned for his sins by trying to make this happen (but he’ll probably fuck it up):

I have 2 issues with this:

1. Jon M. Chu directed G.I. Joe: Retaliation and anybody who rented that mess on VOD and ten minutes in thought to themselves, “I should’ve spent that money on Monster Tacos from Jack in the Box instead,” knows how that turned out.

2. They are moving it to modern day. How can they take what is arguably the Hope Diamond of the 80s and 2014-ize it? Does my soul really want to be exposed to a Jem movie where all the songs are EDM, she communicates with Synergy through FaceTime and her pink star earring is an iEarring by Apple? A Jem movie NEEDS to be made, so I will deal with it.

My dream cast is obvious (Stacey Q in practically every role), so here’s my nightmare cast, which will probably end up being the real cast since Scooter Braun is involved:

But whatever, I’m still going to celebrate with a song!

Tags: Dreams Do Come True, Finally Some Good News, Jem and the Holograms, We Can All Go Home Now
SHARE
Our commenting rules: Don't be racist or bigoted, or get into long-ass fights, or go way off topic when not in an Open Post. Also, promoting adblockers is not allowed. And some comment threads will be pre-moderated, so it may take a second for your comment to show up if it's approved.
src="https://c.statcounter.com/922697/0/f674ac4a/1/"
alt="drupal analytics" >