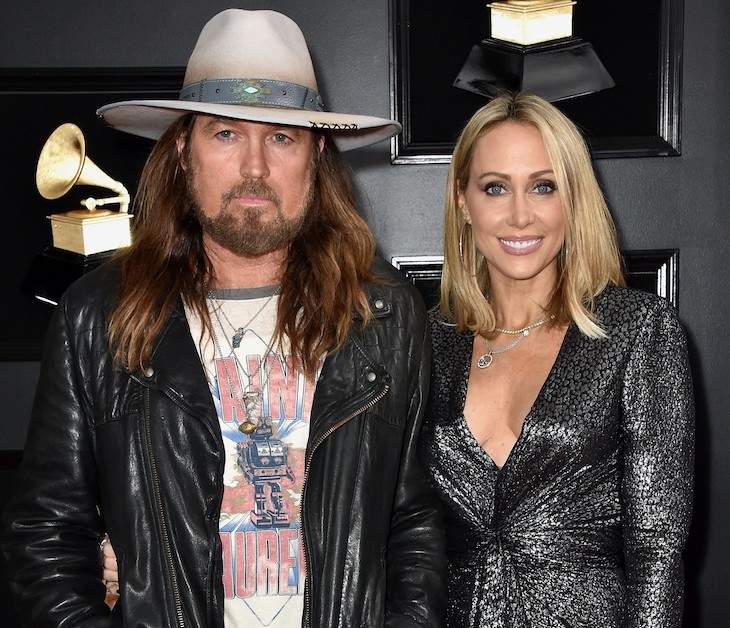 TMZ says that Tish went ahead and filed the appropriate paperwork to end her time as Billy Ray’s wife last week in Tennessee. Tish and Billy Ray live between Los Angeles and Nashville, Tennessee, so that would be why she filed divorce papers there. Although, saying they live there is a bit of a misdirect. E! News reports that Tish allegedly states in the divorce filing that they haven’t lived together since February 2020. She has listed the reason for the split as “irreconcilable differences,” and has asked for an equal split of marital assets. Somewhere Billy Ray is clutching a pile of ripped-knee stonewashed buns-hugging 90s jeans and yelling, “I don’t care what the courts say, these are all MINE!“. Someone should explain assets to Billy Ray because I don’t think that’s what Tish is after here.

As for the kids, Tish and Billy Ray share five between them: 29-year-old Miley Cyrus, 27-year-old Braison Cyrus, 22-year-old Noah Cyrus, and 34-year-old Brandi Cyrus and 33-year-old Trace Cyrus, who Tish brought into their marriage from a previous relationship and were subsequently adopted by Billy Ray. Since none of the kids are, well, kids, there’s no need for child support. TMZ doesn’t say whether she’s asking for spousal support.

Billy Ray and Tish got married back in 1993 in their living room (again, how could these two down-home honeys not make things work?). But, this isn’t the first time they’ve taken an off-road ATV trip down into Divorce Ditch. In 2010, Billy Ray filed for divorce for the first time. The following year, it was revealed they were back together and the divorce was off. Then in 2013, Tish decided to file for divorce from Billy Ray, but about a month later, they revealed they had been in counseling and were trying to work things out. Those two must have been too busy working on their marriage to check in with their lawyers and let them know their backwoods love was blossoming once more because Tish’s divorce filing from 2013 wasn’t officially voided out of the system until 2017.

While Tish and Billy Ray had plenty to say, statement-wise, after their first two divorce filings, neither has had anything to say publicly about this latest development. As such, we really have no idea what ended Tish and Billy Ray’s marriage. We might get lucky and one of them could get messy on an Instagram Live, where they spill that someone was getting their chicken n’ dumplins at someone else’s Cracker Barrel, so to speak. Until then, we can only speculate that Tish just couldn’t continue to live with the knowledge that her husband once revealed that he’d gladly twerk his achy breaky ass all over Robin Thicke’s crotch too. Tish is a big-time stoner, but no amount of weed can permanently wipe that image from one’s memory.

Tags: Another One Bites The Dust, Billy Ray Cyrus, Divorce, Splits, Tish Cyrus
SHARE
Our commenting rules: Don't be racist or bigoted, or post comments like "Who cares?", or have multiple accounts, or repost a comment that was deleted by a mod, or post NSFW pics/videos/GIFs, or go off topic when not in an Open Post, or post paparazzi/event/red carpet pics from photo agencies due to copyright infringement issues. Also, promoting adblockers, your website, or your forum is not allowed. Breaking a rule may result in your Disqus account getting permanently or temporarily banned. New commenters must go through a period of pre-moderation. And some posts may be pre-moderated so it could take a minute for your comment to appear if it's approved. If you have a question or an issue with comments, email: [email protected]
src="https://c.statcounter.com/922697/0/f674ac4a/1/"
alt="drupal analytics" >