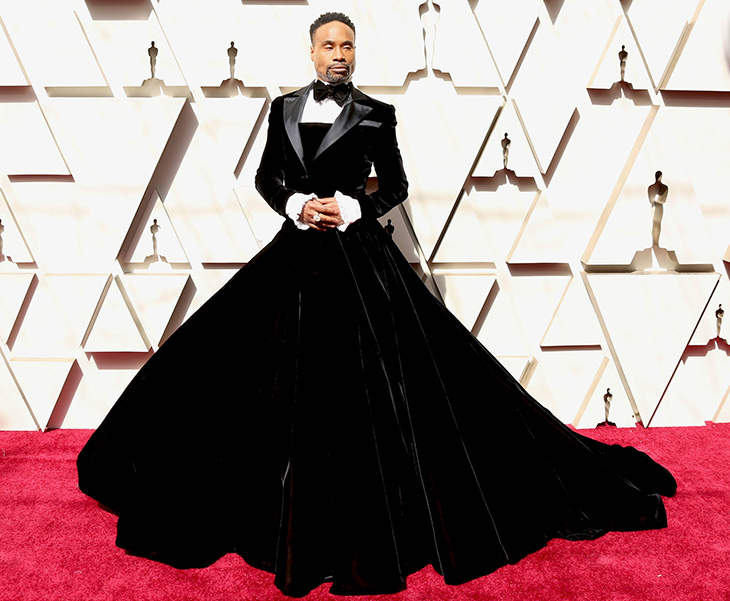 Anna Wintour can add herself to yet another shit list because Billy Porter is pissed. In a new interview with The Sunday Times, Billy came for Vogue and the magazine’s use of Harry Styles as the first male cover star in a dress. In case you live under a rock, Billy has been living his gown-phase for quite some time. And so to see a cis white boy getting attention for wearing a dress ruffled Billy’s golden feathers.

Billy is no newbie to the dress game. The header picture is of him working a Christian Siriano tuxedo gown at the 2019 Oscars. That look is actually one of his more demure looks. He’s been pounding the pavement of progress for generations, so he was a little miffed when the first dude to be featured in a dress on the cover of American Vogue was a 27-year-old who just started wearing dresses a second ago. Also, at the time the cover came out in December 2020, people criticized Vogue, saying that the cover should’ve gone to a trans person of color instead of Harry Styles:

Billy let the Sunday Times’ Style magazine know what he thought about the cover and left his modestly at the door. Billy wanted to make it clear that he’s not shitting on Harry Styles but added that Harry hasn’t struggled when it comes to wearing a dress like Billy has. via Business Insider:

“I changed the whole game. I. Personally. Changed. The. Whole. Game. And that is not ego, that is just fact. I was the first one doing it and now everybody is doing it… I feel like the fashion industry has accepted me because they have to. I’m not necessarily convinced and here is why. I created the conversation [about non-binary fashion] and yet Vogue still put Harry Styles, a straight white man, in a dress on their cover for the first time… I’m not dragging Harry Styles, but he is the one you’re going to try and use to represent this new conversation? He doesn’t care, he’s just doing it because it’s the thing to do. This is politics for me. This is my life. I had to fight my entire life to get to the place where I could wear a dress to the Oscars and not be gunned now. All he has to do is be white and straight.”

Welp, looks like Candace Owens and Billy Porter both agree that Harry Styles on the cover of Vogue wasn’t worth shit. Although, for wildly different reasons.

Unfortunately for Billy, Anna is a businesswoman and she knew that putting Harry Styles on a cover would generate a lot of buzz with the kids. I mean, look how many TikTok stars went to the Met Gala! So don’t be surprised if the next man in a dress on the cover of Vogue ends up being Bryce Hall.

Tags: Billy Porter, Harry Styles
SHARE
Our commenting rules: Don't be racist or bigoted, or post comments like "Who cares?", or have multiple accounts, or repost a comment that was deleted by a mod, or post NSFW pics/videos/GIFs, or go off topic when not in an Open Post, or post paparazzi/event/red carpet pics from photo agencies due to copyright infringement issues. Also, promoting adblockers, your website, or your forum is not allowed. Breaking a rule may result in your Disqus account getting permanently or temporarily banned. New commenters must go through a period of pre-moderation. And some posts may be pre-moderated so it could take a minute for your comment to appear if it's approved. If you have a question or an issue with comments, email: [email protected]
src="https://c.statcounter.com/922697/0/f674ac4a/1/"
alt="drupal analytics" >