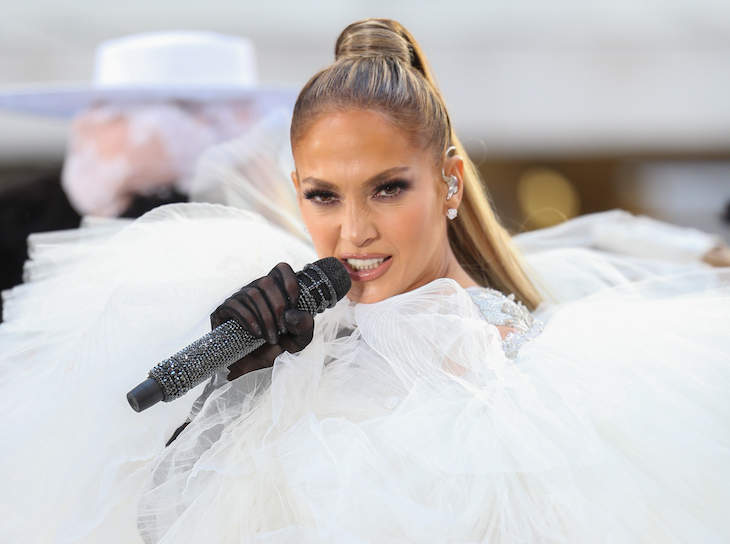 According to multiple sources that have spoken with Us Weekly, Jennifer Lopez is “in talks” to headline next year’s Super Bowl Halftime Show. So if you want to start your Super Bowl betting early, call up your favorite bookie and put $20 down on JLo! But only $20, because you’ve got to save your cash for the real money maker, the Puppy Bowl.

Super Bowl LIV will happen on February 2, 2020 in Miami, FL at the Hard Rock Stadium. This is usually around the time we hear whispers about who is “in talks” to headline the show. JLo hasn’t said anything about this yet, but she did hint she would be into it during an interview back in July with Entertainment Tonight.

“Yeah, we’ve thought about the Super Bowl and it’s in Miami, it’s a big deal but we’ll see. They make their own decisions over there [in the NFL].”

Alex Rodriguez grew up in Miami, and he and JLo spend lots of time there. JLo’s parents were from Puerto Rico, and the demographics of Miami are about 70% Hispanic. Not to mention that Jennifer released a new song last month (Medicine), and a lot of fans think she’s about to drop a new album. Her last album, AKA, was released back in 2014.

Jay-Z was also asked about the idea of JLo doing the Halftime Show during a press conference last month. He said:

“Sometimes it may happen and it may wind up that the person is from the city that they perform. But you don’t want to get in that space ‘cause then who performs in Tampa [in 2021]?”

First of all, JLo is from The Bronx. Second, Channing Tatum spent some time in Tampa, and I think I speak for all of us when I say it would be a real treat to watch Channing’s bare ass cheeks get sprayed with Pepsi while working a goal post like a stripper pole.

But I’m getting ahead of myself here, we’re still on Super Bowl 2020. You could probably say that JLo is totally going to headline Super Bowl 54’s Pepsi Halftime Show. That is, unless someone convinces her that it’s not a great idea. Like Rihanna, who reportedly turned down the chance to headline the Halftime Show this year, or Amy Schumer who called on this year’s Halftime Show sloppy seconds Maroon 5 to back out. Both took a side against the Super Bowl in support of Colin Kaepernick, who chose to knee during the national anthem in protest of police brutality (and subsequently found himself without a team to play on). At the very least, she might have Travis Scott suggesting she fight any possible bad publicity by donating some of the money she makes from her performance. To which JLo might reply, “Yeah, but can’t I just make an apology after instead?”

Tags: Jennifer Lopez, JLo, Super Bowl
SHARE
Our commenting rules: Don't be racist or bigoted, or post comments like "Who cares?", or have multiple accounts, or repost a comment that was deleted by a mod, or post NSFW pics/videos/GIFs, or go off topic when not in an Open Post, or post paparazzi/event/red carpet pics from photo agencies due to copyright infringement issues. Also, promoting adblockers, your website, or your forum is not allowed. Breaking a rule may result in your Disqus account getting permanently or temporarily banned. New commenters must go through a period of pre-moderation. And some posts may be pre-moderated so it could take a minute for your comment to appear if it's approved. If you have a question or an issue with comments, email: [email protected]
src="https://c.statcounter.com/922697/0/f674ac4a/1/"
alt="drupal analytics" >