Open Post: Hosted By Jason Momoa Stuck In An Elevator With His Dog 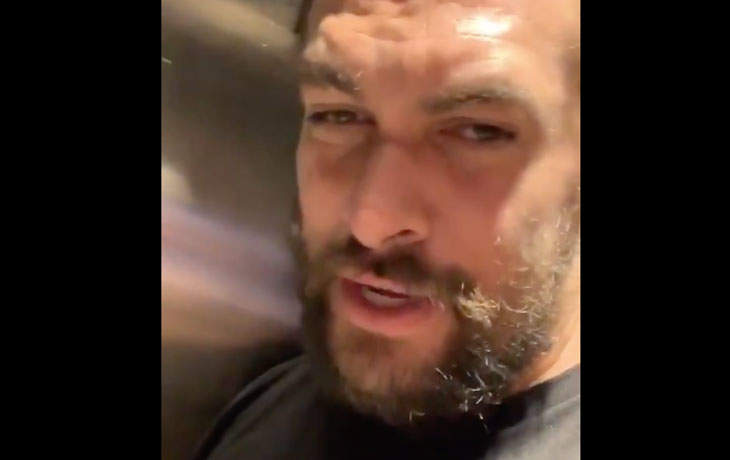 I’m sure there’s a lot of people out there who just wished genies were real, so they could wish to switch places with that dog. But I regret to inform you that Jason Momoa’s elevator ordeal involved other people. “Looks like I’m using my second wish on wishing them out of there.”

People magazine says that a whole lot of people’s fantasies came true on Tuesday when Jason, who is in Canada to shoot his Apple+ show, posted an Instagram Story explaining that he and his dog Rama, and several friends, got stuck in an elevator at the L’Hermitage hotel in Vancouver. Jason and friends were stuck for two hours. Two hours?! That sounds like a torture game from Saw, except the challenge is to see who can avoid getting dog pee on their leg.

Jason had some M&Ms that he shared with his hungry elevator cellmates. And that tells you all you need to know how #blessed Jason Momoa is. First, he looks like Jason Momoa. Second, he’s married to Lisa Bonet. Third, he got stuck in an elevator with M&Ms. I just know that if I got stuck in an elevator and my tummy started grumbling, fate would not be so kind to me. I’d probably reach in my bag and find an emergency buffet featuring the nut dust from the bottom of a snack sized bag of trail mix and a warm, expired strawberry yogurt.

Eventually Jason’s stunt team found their elevator to check on everyone inside, and he shouted out: “We’re just trying to get out. Trying to be Die Hard but it didn’t work out.” Shortly after, Jason and company made it out. But I can’t believe Jason wasn’t able to get people out faster. Honestly, they could have been out in about six seconds, and all it would have taken was Jason’s words. Science has shown that people can display superhuman feats of strength when they truly believe there’s an emergency at hand. All Jason had to do was say, “I’d strip down to nothing but my tattoos if someone was able to get us out of here!” and those elevator doors would be ripped off their tracks.

Tags: Jason Momoa, Open Post
SHARE
Our commenting rules: Don't be racist or bigoted, or get into long-ass fights, or go way off topic when not in an Open Post. Also, promoting adblockers, your website, or your forum is not allowed. And some comment threads will be pre-moderated, so it may take a second for your comment to show up if it's approved.
src="https://c.statcounter.com/922697/0/f674ac4a/1/"
alt="drupal analytics" >