Tom Cruise Hurt Himself On The Set Of “Mission: Impossible 6” David Miscavige better hop in Scientology’s private jet and get his ass over to London, England with his favorite nurse’s uniform, because his best buddy Tom Cruise needs some tender loving care today. Tom had a very real moment on the set of Mission: Impossible 6 yesterday, and it was more real and intense than a thousand couch-jumps and Matt Lauer “You’re glib” show-downs combined. According to TMZ, Tom was injured pretty bad during a stunt when he attempted to leap from one building to another.

The plan was for Tom, who was rigged up in a harness, to put that signature run to work and leap from the roof of one building in London to another. Unfortunately, Tom isn’t Mary Poppins, and he didn’t completely clear the roof jump.

TMZ says he attempted the jump twice, and didn’t make it both times. Here’s another video of Tom’s failed jump.

Hollywood actor Tom Cruise was left injured after falling off a building as he filmed a daring stunt in London: pic.twitter.com/jkf8O9zaiw

That’s such an awkward execution for a Mission: Impossible stunt. Even more awkward than Tom trying to look romantic with Vanessa Kirby.

TMZ says that the extent of his injuries are not known. But by the sound of his body making contact with the building and the footage of him bouncing like a schoolyard tetherball, I’m not sure this is the kind of workplace injury he can just walk off.

And all that for the sixth Mission: Impossible movie? Not to mention Tom is 55 years old. It’s not worth it! I know Tom is an on-set control freak, and I’m sure he’s convinced himself he got some kind of special intergalactic Scientology flying powers as a gift with purchase for spending so much money. But some things are better left to the professionals.

Here are some pictures of Tom attempting to clear the building yesterday in London. I will say this; even when he realizes he’s not going to make it, he still gives good face. 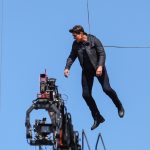 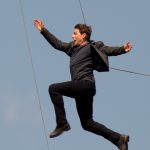 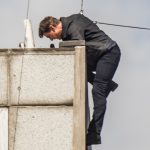 Tags: Tom Cruise
SHARE
Our commenting rules are pretty simple: Don't be racist or bigoted, or go way off topic when not in an Open Post. If you see an offensive or spammy comment you think should be deleted, flag it for the mods and they'll be forever grateful and give you their first born (although, you probably don't want that).
src="https://c.statcounter.com/922697/0/f674ac4a/1/"
alt="drupal analytics" >