Katy Perry performed her new single, Chained to the Rhythm, at the Grammys last night while simultaneously paying tribute to Wilson from Home Improvement. But before that, she walked the red carpet and caused some of the internet to start furiously typing after hearing Katy not-so-subtly drag Britney Spears not once, but twice.

Katy’s obsession with the 90s has clearly turned into a thing for the 00s, because twice she joked about Britney Spears’ head-shaving moment from 2007. The first happened after Entertainment Tonight asked Katy about her new-ish hair.

“The only thing left to do is shave my head, which I’m really saving for a public breakdown. I’m down for that.” Then Katy was asked by Botoxed sea-monkey Ryan Seacrest why she’s been MIA recently, and oops, she did it again.

“Yeah, that’s called taking care of your mental health…[it went] fantastic! And I haven’t shaved my head yet.”

Katy doesn’t call out Brit Brit by name, but she doesn’t exactly have to, since we all know who she’s talking about. Katy Perry has never been one for subtlety. Well, some people – Britney fans to be exact – didn’t think it was very funny of Katy and they let her know it on Twitter. They also got the hashtag #KatyPerryIsOverParty trending for a second. Why do I get the feeling a certain blonde serpent was hissing with delight at that one.

Britney’s fans might have been pissed, but Britney herself hasn’t said anything. She might be too busy countin’ sparkles and Instagramming bikini pics to care that Katy Perry might have come for her.

Katy Perry’s joke gets a shrug from me. What I’m more concerned with is that she seems to be doth protesting too much. Like, Katy, we get it. You want to be Britney Jean. You copied her denim gown eleganza, you bleached your hair to within an inch of its life, and now you’re hinting at head-shaving. Damn, is Katy trying to land the role of Hedy on NBC’s Single White Female reboot or what? 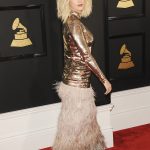 Tags: 2017 Grammys, Britney Spears, Katy Perry, You Pissed Somebody Off
SHARE
Our commenting rules: Don't be racist or bigoted, or post comments like "Who cares?", or have multiple accounts, or repost a comment that was deleted by a mod, or post NSFW pics/videos/GIFs, or go off topic when not in an Open Post, or post paparazzi/event/red carpet pics from photo agencies due to copyright infringement issues. Also, promoting adblockers, your website, or your forum is not allowed. Breaking a rule may result in your Disqus account getting permanently or temporarily banned. New commenters must go through a period of pre-moderation. And some posts may be pre-moderated so it could take a minute for your comment to appear if it's approved. If you have a question or an issue with comments, email: [email protected]
src="https://c.statcounter.com/922697/0/f674ac4a/1/"
alt="drupal analytics" >