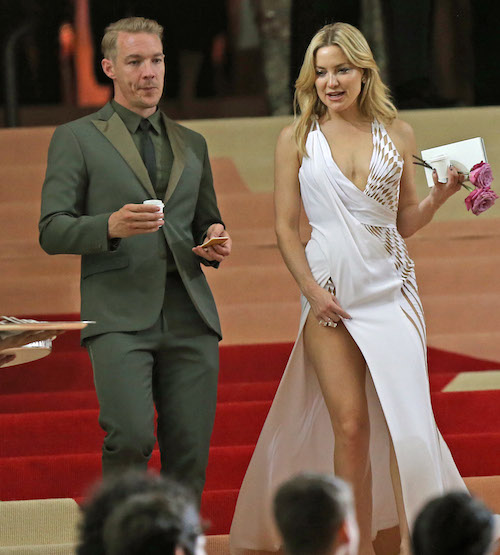 The last time we checked in with Kate Hudson, she was coming off a long casual thing with Nick Jonas and wrapping herself around football player J.J. Watt. That was three months ago. Kate’s groupie coochie may have gotten nostalgic for that music industry peen, because according to UsWeekly, she’s once again seeing someone with a recording contract.

A source tells UsWeekly that Kate Hudson is currently dating DJ and former Twitter troll Diplo. The half of Diplo that’s “half straight” allegedly got together with Kate Hudson in Ibiza a few weeks ago when he was playing a club and she was vacationing with some friends. UsWeekly can’t say for sure when they officially met, but as you can see from the picture above, they’ve been friendly since at least the Met Gala back in May.

Even if Diplo’s people are right and they’re not humping, they really should. Kate dating Diplo makes so much sense, it’s almost creepy. They’re both blonde. They’re both 37-years-old. They both have two sons. They even have a “Taylor” connection: Kate used to be the face of Ann Taylor, and Diplo once tried to get a butt for Taylor Swift.

In the event they are actually dating, I don’t know why Diplo would want to deny that. His last sort-of maybe-relationship eventually took his too-old-for-this ass to Taylor Swift’s metaphorical high school locker hallway. You’d think he’d be happy to tell people that he’s going on the kind of dates that don’t end with him slowly driving past Kate’s arch enemy’s house while she ducks down in the front seat asking “Can you see her? Is she being the worst? I bet she totally is.”

Tags: Diplo, Kate Hudson, New Couple Alert
SHARE
Our commenting rules are pretty simple: Don't be racist or bigoted, or go way off topic when not in an Open Post. If you see an offensive or spammy comment you think should be deleted, flag it for the mods and they'll be forever grateful and give you their first born (although, you probably don't want that).
src="https://c.statcounter.com/922697/0/f674ac4a/1/"
alt="drupal analytics" >