Do not want. Do not want now, do not want ever, do not want even as a joke. I didn’t think it got any worse than unhip white people trying to rap, but it did. It got soooooo much worse. These are the times I wish I had access to time travel, so I could go back to yesterday, hunt Jimmy Fallon down like the Predator, and tell him I’m a visitor from the future here to warn him that unless he single-handedly wants to re-define NOPE, he should think twice about accompanying Ann-WITH-AN-E Hathaway as she sings a medley of rap songs like a lounge singer.

Everything about this was just so…dorky. It was like a Dad Joke came alive and crashed your sleepover by asking if anyone wanted to see his impression of “Snoop Doggy Dog”. If there is a merciful God watching over us, I pray that he never makes us witness Ann-WITH-AN-E-SO-HELP-ME-GOD throwing up gang signs and trying to back that ass up (which looked about as comfortable as Tom Cruise trying not to barf in his mouth while describing a vagina). Oh, and AnnEEEEEE? If I wanted the poor man’s Liza, I’d call up Lea Michele.

Here’s more of annE Hatha-way-kewl getting ready to promote Rio 2 on Good Morning America this morning. I think she took that sing-rapping a little too serious, because she’s mean muggin like a straight gangsta. For those of you who don’t speak Hatha-hater (her words OF COURSE) it means she looks like a miserable bitch. She finally flashed a smile as she was leaving the studio, but I have no idea why; being seen in public looking like Uncle Terry fucking inside of an IKEA area rug is nothing to be smile about. 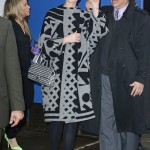 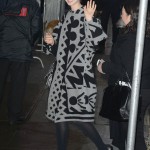 Tags: Anne Hathaway, I Can't With You, Jimmy Fallon, Nope
SHARE
Our commenting rules: Don't be racist or bigoted, or post comments like "Who cares?", or have multiple accounts, or repost a comment that was deleted by a mod, or post NSFW pics/videos/GIFs, or go off topic when not in an Open Post, or post paparazzi/event/red carpet pics from photo agencies due to copyright infringement issues. Also, promoting adblockers, your website, or your forum is not allowed. Breaking a rule may result in your Disqus account getting permanently or temporarily banned. New commenters must go through a period of pre-moderation. And some posts may be pre-moderated so it could take a minute for your comment to appear if it's approved. If you have a question or an issue with comments, email: [email protected]
src="https://c.statcounter.com/922697/0/f674ac4a/1/"
alt="drupal analytics" >