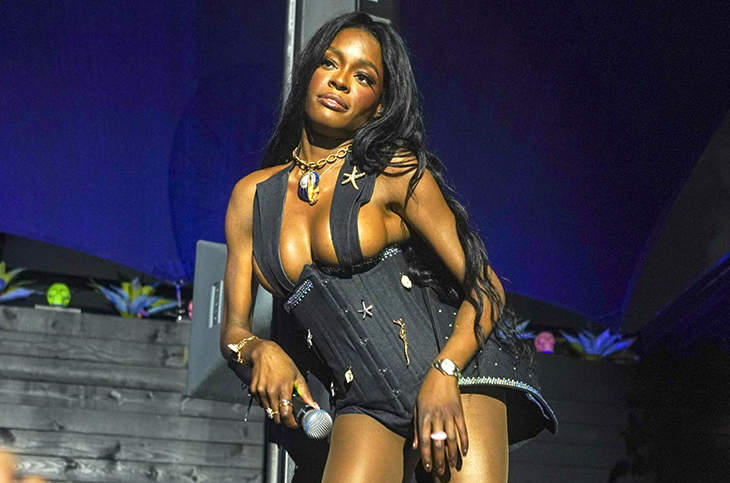 Azealia Banks is continuing her usual activities, which include throwing fits at ill-timed moments. Except for that Elon Musk mansion drama fiasco–that was the perfect moment. But this time, the 31-year-old rapper lost her shit while at a Pride event that she was working at in Miami. Normally, it’s hard to act out of pocket in Florida but Azealia found a way, as she complained about performing while performing to a degree that was so irritating to the show-runners, that they cut her mic. For Azealia’s sake, I hope she got paid up-front–for the promoters’ sake, I hope they called their bank to cancel the payment.

Azealia has had a messy relationship with the LGBTQ community for a while, as she’s said some crazy transphobic shit and has acted as dumb about HIV AIDS as DaBaby. But still, Wynwood Pride in Miami chose Azealia Banks and she was scheduled to perform all weekend.

But on Saturday morning, shit went sideways. Starting the weekend off with a flop! After taking the stage at 3 in the morning, TMZ says that Azealia went off about the show’s promoters:

The controversial rapper — who performed with her boobs all the way out — started ranting about promoters jerking her around about her set times and whether she’s the headliner.

She brazenly told the crowd, “I’m really not happy to be here.” Azealia rambled a little more, and said she knew it wasn’t the fans’ fault

Seems like the concert promoters had enough though, because when Azealia repeated her frustration by saying, “I really don’t wanna fucking be here” … someone cut off her mic.

That only pissed her off more, and pulled a spot-on mic drop … and left the stage in a huff.

Now, mind you … Azealia had only done about 4 songs at that point, so you can hear the crowd get restless — everyone started booing when they realized she wasn’t coming back.

Here’s video of a tits-out Azealia going off:

People says that Azealia spoke more about the debacle on Twitter in a thread where she said that “Wynwood Pride was way too ghetto. I had to bounce,” and also that it was “an absolute display of how Hispanic citizens in south Florida make poor attempts at selfish cash grabs by exploiting young undocumented gay boys for nightlife entertainment.” And she went on:

…[Azealia] claimed that her originally scheduled performance time of 10 p.m. was pushed to 1 a.m. and they ignored her tech rider that asks for no dry ice because she is “EXTREMELY allergic to it.” Banks added that the clouds from the dry ice “began to make me lightheaded to a point I could “barely stand.”

Azealia’s Twitter page is suspended no I don’t think it was related to her Pride event thread, but I think it’s related to her being permanently banned for some weird COVID-19 vaccine-slash-anti-trans tweets that Azealia made previously. But Azealia Banks is really gonna run out of places she can throw a fit at if she keeps this up. Soon, the only place she’ll be able to act out of pocket will be your local Wal-Mart, and so many people already do that already–she won’t be unique.

Tags: Azealia Banks, Gay Pride, Hissy Fits
SHARE
Our commenting rules: Don't be racist or bigoted, or post comments like "Who cares?", or have multiple accounts, or repost a comment that was deleted by a mod, or post NSFW pics/videos/GIFs, or go off topic when not in an Open Post, or post paparazzi/event/red carpet pics from photo agencies due to copyright infringement issues. Also, promoting adblockers, your website, or your forum is not allowed. Breaking a rule may result in your Disqus account getting permanently or temporarily banned. New commenters must go through a period of pre-moderation. And some posts may be pre-moderated so it could take a minute for your comment to appear if it's approved. If you have a question or an issue with comments, email: [email protected]
src="https://c.statcounter.com/922697/0/f674ac4a/1/"
alt="drupal analytics" >