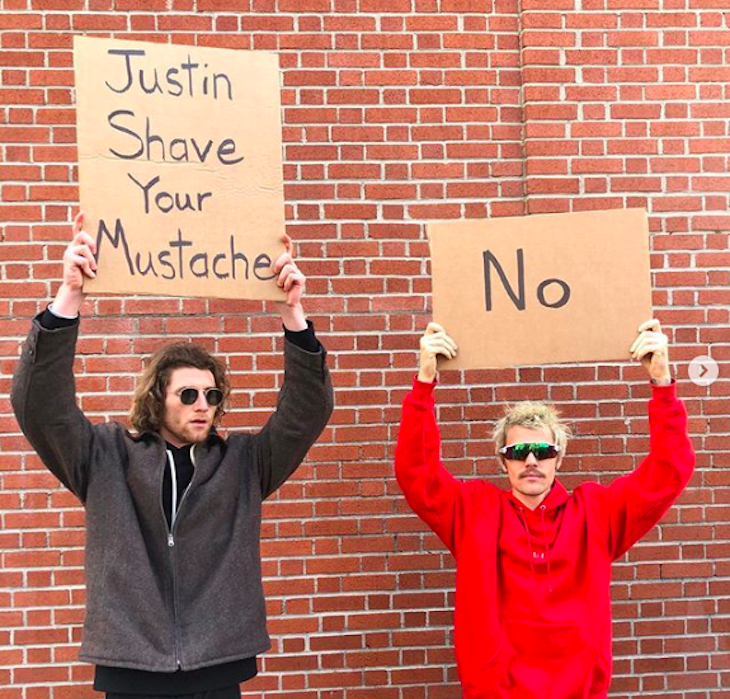 Justin Bieber still doesn’t care what anyone thinks – he will NOT shave his disgusting moustache. Not for his wife, not for his adoring fans, not for his SNL performance this past weekend, not even for actual real-life protesters.

Some guy known as “Dude With Sign” (allegedly a “viral sensation”… OK) “protested” Justin’s new stache in New York, and Justin replied with his own sign that just said “No”. First off, this is a vast conspiracy starting at the top (I’m looking at you, Scooter Braun). Both cardboard signs are made from the same box! The writing is identical! Finally, and this is what really clinched it for me… if you turn the signs around, there is promo for JB’s album release date:

Call me crazy, but I’m starting to think this “Dude with Sign” character is hardly the grassroots activist we thought he was. Just another cog in the machine! WAKE UP, SHEEPLE! But back to JB’s pubestache. A source tells Page Six:

“He feels that for years he’s been the pretty boy and loves how much everyone hates it and thinks it’s hilarious,” one insider shared.

“He doesn’t even like it himself, but the more people hate it the longer he wants to keep it”

See, if Justin were twelve, I’d fully support that logic. I wore the same BOCA sweatshirt every single day of the year in 2000, because my mom hated it (did America have BOCA? Your loss if you didn’t…). Anyway, it was a spite shirt. And this is a spite stache. But Justin is now a twenty-five year old man. And with that stache, he’s slowly transforming into the kind of guy who would perv outside a young, hairless, original Bieber’s schoolyard – JK! LOL! The Biebs never went to school!!!

Tags: Gross, Justin Bieber, Open Post
SHARE
Our commenting rules: Don't be racist or bigoted, or get into long-ass fights, or go way off topic when not in an Open Post. Also, promoting adblockers is not allowed. And some comment threads will be pre-moderated, so it may take a second for your comment to show up if it's approved.
src="https://c.statcounter.com/922697/0/f674ac4a/1/"
alt="drupal analytics" >