Jennifer Aniston Is Not Sad, Miserable Or Heartbroken 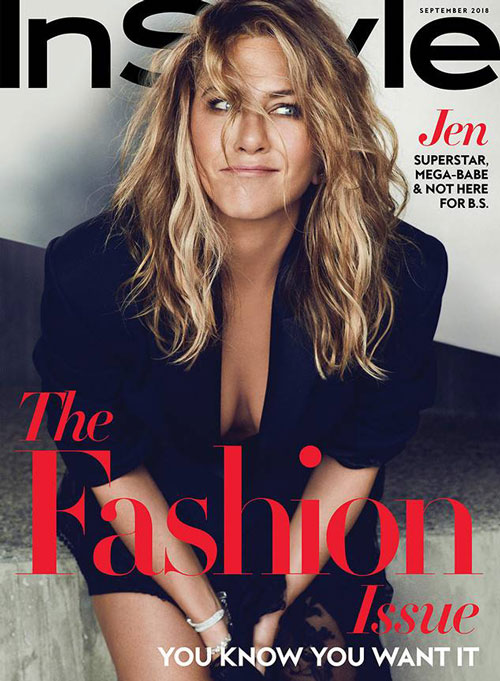 Seen above looking like she’s taking one quirky shit, Jennifer Aniston is on the cover InStyle’s September issue, and inside she talks to her friend/Jimmy Kimmel Live! co-head writer/Jimmy Kimmel’s wife Molly McNearney to promote her movie Dumplin, where she plays a former beauty queen. Molly and Aniston met through Justin Theroux, and have stayed friends even after she split up with the living and breathing pair of black meggings. Aniston and Molly don’t talk about Justin, but they do talk about how the tabloids and bloggers (for why is everybody looking at me?) continue to paint her as a human pile of uncooked cookie dough who squirts out lonely tears from her crying holes as she clutches her Baby Alive doll while staring at the window and waiting for the stork to bring her a real-life baby of her own. Again, Jen is FINE. She’s not heartbroken and wishes bitches would keep their magnifying glasses out of her womb.

Molly asked Aniston what’s the biggest misconception about her is, and she joked about Googling herself, which made Molly ask about all the tabloid stories. Aniston shit on society’s pressure for women to birth out a human unless they want to be labeled a spinster and sent to the colonies:

It’s pretty crazy. The misconceptions are “Jen can’t keep a man,” and “Jen refuses to have a baby because she’s selfish and committed to her career.” Or that I’m sad and heartbroken. First, with all due respect, I’m not heartbroken. And second, those are reckless assumptions. No one knows what’s going on behind closed doors. No one considers how sensitive that might be for my partner and me. They don’t know what I’ve been through medically or emotionally. There is a pressure on women to be mothers, and if they are not, then they’re deemed damaged goods. Maybe my purpose on this planet isn’t to procreate. Maybe I have other things I’m supposed to do?

They got away from talking about Aniston’s personal life for a bit and talked about Dumplin, which Dolly Parton is doing the soundtrack for, and a Friends reunion. I always thought that Aniston’s mailbox was already really full with checks from Aveeno, Smart Water, and Eyelove that she really didn’t need a check to do a Friends revival. But she seems to be open to it, and then she said some sacrilegious foolishness that should’ve made the mighty hand of God fall down on her mansion and destroy it.

Before that show ended, people were asking if we were coming back. Courteney [Cox] and Lisa [Kudrow] and I talk about it. I fantasize about it. It really was the greatest job I ever had. I don’t know what it would look like today, but you never know. So many shows are being successfully rebooted. I know Matt LeBlanc doesn’t want to be asked that question anymore. But maybe we could talk him into it. Or we just give it some time and then Lisa, Courteney, and I could reboot The Golden Girls and spend our last years together on wicker furniture.

There’s two things you never joke about: you don’t joke about naked pictures of Idris Elba existing on the internet if they don’t, and you don’t joke about a Golden Girls reboot. The day Hollywood reboots The Golden Girls is the day I walk into the ER and say, “Yes, I’d like a doctor to surgically remove my hands before I use them to set fire to Hollywood. Actually, surgically remove my entire arms and legs, because I’m so damn mad I’d find a way to set fire to that bitch with my stumps and feet.” Who would Courteney and Aniston even play? The wicker furniture?!

Aniston went back to her personal life, and gave the tabloids a little mid-summer cover story by saying that she’s taken up boxing and imagines one person when she punches that bag.

Boxing is a great way to get aggression out. You get a mental release of all this crap you’re taking into your ears and eyes every day and have little fantasy moments imagining who you’re actually punching. I’m just grateful it’s not actually the person, even though there’s one person. You know what I mean. It’s all good.

So who is that one person she pictures while punching the bag? If it’s wearing extra skinny black jeans and has a bulge so big it causes your jaw to break just by looking at it, then we know she pictures her ex. But I have a feeling that in next week’s issue of Star Magazine, they’re going to take us into Jennifer Aniston’s home gym and show us that her punching bag looks exactly like this: Tags: JEN IS FINE, Jennifer Aniston, Justin Theroux, This Again?
SHARE
Our commenting rules: Don't be racist or bigoted, or get into long-ass fights, or go way off topic when not in an Open Post. Also, promoting adblockers, your website, or your forum is not allowed. And some comment threads will be pre-moderated, so it may take a second for your comment to show up if it's approved.
src="https://c.statcounter.com/922697/0/f674ac4a/1/"
alt="drupal analytics" >