Because the Grammys truly award the best in music (served on a bed of sarcasm), Taylor Swift beat Kendrick Lamar and Alabama Shakes for Album of the Year. It’s the second time that Taylor has won Album of the Year. I was waiting all night for Taylor of Sunnybrook Farms to slap at Kanye West and I thought that during her performance, she was going to dance around a bonfire of flaming Yeezys. But Taylor waited until her speech.

While stealing melon cat’s signature look, Taylor pretty much responded to Kanye’s song where he raps the lyrics: “I feel like me and Taylor might still have sex. Why? I made that bitch famous.” Kanye claimed in one of his tweet rants of delusion that Taylor gave him the thumbs up to use the lyrics and even came up with it. Tay Tay’s rep shat on Kanye’s claim, and at the Grammys tonight, she made it perfectly clear that she wasn’t into those lyrics. I would’ve been into Taylor spitting out a simple, “Fuck you, Kanye, I wouldn’t even finger you with Freddy Krueger’s glove” but she went the girl power route instead. She gave a speech that she totally rehearsed at least 24 times in front of her cats and was probably co-written by Lena Dunham.

And if you can’t or don’t want to watch that video, here’s what she said and yes, I too kept waiting for her to say, “You’re good enough, you’re smart enough and doggone it, people like you!”

“As the first woman to win Album of the Year at the Grammys twice, I want to say to all the young women out there, there are going to be people along the way who will try to undercut your success, take credit for your accomplishments, or your fame, but if you just focus on the work and you don’t let those people sidetrack you, some day when you get where you’re going, you’ll look around and you will know that it was you and the people who love you who put you there. And that will be the greatest feeling in the world. Thank you for this moment.”

Meanwhile, a confused Kanye West probably watched that speech and wondered why Taylor Swift didn’t thank him because she would’ve never won that award if it wasn’t for him making her famous. 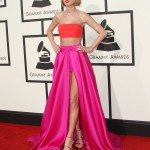 Tags: Grammys, Kanye West, Selena Gomez, Taylor Swift, Yeah Okay
SHARE
Our commenting rules: Don't be racist or bigoted, or get into long-ass fights, or go way off topic when not in an Open Post. Also, promoting adblockers, your website, or your forum is not allowed. And some comment threads will be pre-moderated, so it may take a second for your comment to show up if it's approved.
src="https://c.statcounter.com/922697/0/f674ac4a/1/"
alt="drupal analytics" >